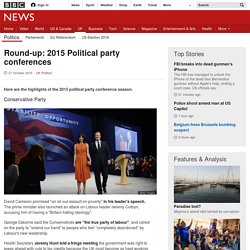 Conservative Party Image copyright Getty Images David Cameron promised "an all-out assault on poverty" in his leader's speech. The prime minister also launched an attack on Labour leader Jeremy Corbyn, accusing him of having a "Britain-hating ideology". George Osborne said the Conservatives are "the true party of labour", and called on the party to "extend our hand" to people who feel "completely abandoned" by Labour's new leadership. Health Secretary Jeremy Hunt told a fringe meeting the government was right to press ahead with cuts to tax credits because the UK must become as hard working as China. Here is a full round-up events in Manchester. 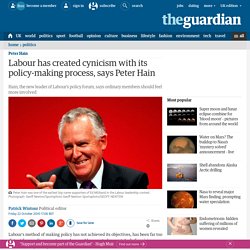 Hain, the man chosen by Ed Miliband to lead Labour's policy forum, says in a Guardian interview: "I defend the policy forum principle, but there is a great deal of cynicism amongst party members that we need to address. If you disempower your membership, you start down the road to losing, and that is what happened during our 13 years of power. "I feel rejuvenating our national policy forum is a precondition to winning the next election, and that is very much Ed Miliband's view. He is clear that we have to make policy in a very different way. " Hain, one of the earliest big-name supporters of Ed Miliband, was unexpectedly not elected to the shadow cabinet. McFadden, also voted off the shadow cabinet, has decided not to take a frontbench role.

How the Labour Party makes its policy - BBC News. Image copyright Getty Images Jeremy Corbyn is preparing for his first annual conference as Labour leader, which will include a vote on the party's nuclear policy for the first time in over a decade. 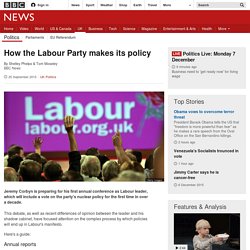 This debate, as well as recent differences of opinion between the leader and his shadow cabinet, have focused attention on the complex process by which policies will end up in Labour's manifesto. Here's a guide: Annual reports Labour Party policy is the result of consultation with members, elected representatives (MPs, MEPs and councillors) and the trade unions. The main body for shaping policy is the National Policy Forum, an elected group of over 200 people representing councillors, trade unions, socialist societies and MPs. For manifesto policy, there is a formal consultation process which culminates in a meeting of the forum the year before the general election to agree the final details of what will form the foundation of Labour's next manifesto. 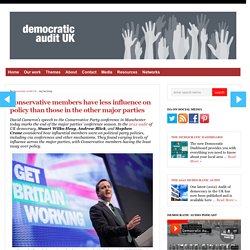 In the 2012 audit of UK democracy, Stuart Wilks-Heeg, Andrew Blick, and Stephen Crone considered how influential members were on political party policies, including via conferences and other mechanisms. They found varying levels of influence across the major parties, with Conservative members having the least sway over policy. How much influence do Conservative members have over party policy? Credit: Conservatives (CC BY-NC-ND 2.0) While there is much truth in the characterisation of contemporary UK political parties as ‘electoral professional’ organisations, it can also be argued that it ‘does not quite describe the realities of modern British party politics’. Role of party conferences The nature of membership involvement in party conferences offers important clues about the extent of member influence on political parties more generally.