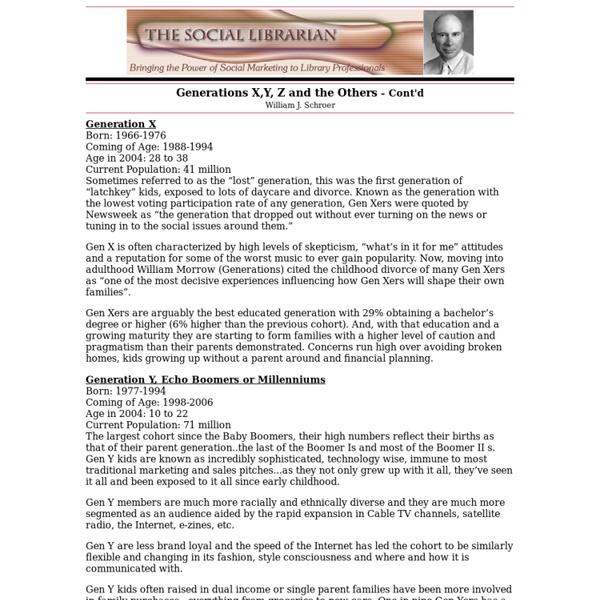 Generation X Born: 1966-1976 Coming of Age: 1988-1994 Age in 2004: 28 to 38 Current Population: 41 million Sometimes referred to as the “lost” generation, this was the first generation of “latchkey” kids, exposed to lots of daycare and divorce. Known as the generation with the lowest voting participation rate of any generation, Gen Xers were quoted by Newsweek as “the generation that dropped out without ever turning on the news or tuning in to the social issues around them.” Gen X is often characterized by high levels of skepticism, “what’s in it for me” attitudes and a reputation for some of the worst music to ever gain popularity. Now, moving into adulthood William Morrow (Generations) cited the childhood divorce of many Gen Xers as “one of the most decisive experiences influencing how Gen Xers will shape their own families”. Gen Xers are arguably the best educated generation with 29% obtaining a bachelor’s degree or higher (6% higher than the previous cohort).

Generation Y - Characteristics of Generation Y Born in the mid-1980's and later, Generation Y legal professionals are in their 20s and are just entering the workforce. With numbers estimated as high as 70 million, Generation Y (also known as the Millennials) is the fastest growing segment of today’s workforce. As law firms compete for available talent, employers cannot ignore the needs, desires and attitudes of this vast generation. Below are a few common traits that define Generation Y. Tech-Savvy: Generation Y grew up with technology and rely on it to perform their jobs better. Armed with BlackBerrys, laptops, cellphones and other gadgets, Generation Y is plugged-in 24 hours a day, 7 days a week. Family-Centric: The fast-track has lost much of its appeal for Generation Y who is willing to trade high pay for fewer billable hours, flexible schedules and a better work/life balance. Team-Oriented: As children, Generation Y participated in team sports, play groups and other group activities.

Generation Y Terminology[edit] Authors William Strauss and Neil Howe wrote about the Millennials in Generations: The History of America's Future, 1584 to 2069,[2] and they released an entire book devoted to them, titled Millennials Rising: The Next Great Generation.[3] Strauss and Howe are "widely credited with naming the Millennials" according to journalist Bruce Horovitz.[1] In 1987 they coined the term "around the time 1982-born children were entering preschool and the media were first identifying their prospective link to the millennial year 2000".[4] Strauss and Howe use 1982 as the Millennials' starting birth year and 2004 as the last birth year.[5] The phrase Generation Y first appeared in an August 1993 Ad Age editorial to describe teenagers of the day, which they defined as different from Generation X, and then aged 11 or younger as well as the teenagers of the upcoming ten years.[6] Since then, the company has sometimes used 1982 as the starting birth year for this generation.[7] William A.

Strauss–Howe generational theory The Strauss–Howe generational theory, created by authors William Strauss and Neil Howe, identifies a recurring generational cycle in American history. Strauss and Howe lay the groundwork for the theory in their 1991 book Generations, which retells the history of America as a series of generational biographies going back to 1584.[1] In their 1997 book The Fourth Turning, the authors expand the theory to focus on a fourfold cycle of generational types and recurring mood eras in American history.[2] Their consultancy, LifeCourse Associates, has expanded on the concept in a variety of publications since then. The theory was developed to describe the history of the United States, including the 13 colonies and their Anglo antecedents, and this is where the most detailed research has been done. History William Strauss and Neil Howe’s partnership began in the late 1980s when they began writing the book Generations, which tells the history of America as a succession of generational biographies.

Quick Facts More than half of the world's population is under the age of 25. Born between 1978 and 2000, the Millennial Generation, also called Generation Y, Generation We, the global generation, currently include 95 million young people up to 30 years of age. In 2016, it will be 100 million strong. The millennial generation is globally oriented, extremely diverse, technologically brilliant, and it has the most progressive political orientation till date. (Generation-We) The millennial generation is the first generation in American history to inherit a nation in decline. Globally, in the last 100 years, we’ve consumed more resources than all of human history combined. America has the highest child poverty rate in a developed country. 1 in every 2 Americans will get cancer. 1 in every 3 Americans will get diabetes. Yet we are far from resigned. 79% of Millenials believe that our generation has better opportunities to make a difference and produce structural change than previous generations.

15 Stats Brands Should Know About Millennials Like all new generations, millennials are often misunderstood. The rap on them is they’re serial oversharers in constant need of acknowledgment and feedback. And, of course, some of that is true. But it’s just as true that this newest generation is an optimistic bunch who are trying to make the best of the economic climate and tough job market. Here are 15 interesting stats about the coveted class of consumers who are also your employees. There are about 79 million millennials in the U.S., versus the 48 million Generation Xers (born between 1965 and 1980). Millennials will make up 50 percent of the U.S. workforce by 2030. 23 percent of companies reported having heavy contact with parents of millennial employees. 4 percent of employers involved reported parents attended their children’s job interviews. 31 percent of employers involved reported parents submitted resumes on behalf of their offspring. 27 percent of millennials are self-employed. Millennials send about 20 texts per day.

Millennial Statistics You Need to Know A lot of nonprofits are using the 2012 Presidential campaign season to rally their base and get their constituents out to vote. As organizations fighting for social justice issues every day, having the best advocate in office, is critical to meeting our mission. When you look at your email lists, what percentage is comprised of millenials? If your response is not much, you should consider recruiting more millennials to your list. Take a look at the infographic below that shows how diverse and engaged millenials are. Millennial Statistics You Need to Know 66% of millennials voted for President Obama in the last election compared to 50% of Gen Xers and Boomers.41% of millennials say they are satisfied with the direction of the country.While 50% say that President Obama has not changed how Washington works, only 25% blame it on the President. Millenials are Less Green than Gen Xers An interesting point to note is that research shows that millennials are slightly less green then Gen Xers.

Older Americans' Moral Attitudes Changing PRINCETON, NJ -- Americans across the age spectrum are in broad agreement on the morality of a variety of societal issues, and older Americans' views on several once taboo matters related to sexuality -- such as premarital sex and gay relations -- have significantly evolved. Nevertheless, young adults are far more accepting of two such matters -- pornography and sexual relations -- than older adults, possibly signifying an eventual cultural shift on these. These data are from Gallup's 2013 Values and Beliefs poll, conducted May 2-7. As previously reported, Gallup's trends show majority acceptance of two -- having a baby outside of marriage and gay or lesbian relations -- being reached in the past decade, while acceptance of others has increased over the same time from a smaller to larger majority. For many of these items, moral acceptance has seen significant change across all age groups, with the largest changes in acceptance of certain issues among Americans aged 55 and older.

Generation Y, Dating And Technology: Digital Natives Struggle To Connect Offline As a professional matchmaker, Alison Green has seen all kinds of things get in the way of successful relationships. But the Millennial Generation, aged 18 to 30, faces a particular problem with technology, she said, recalling one of her female clients who wanted to stop seeing a guy because he didn’t text her enough between dates. “I know people who have broken up or stopped dating because when they’ve come face-to-face, they can’t communicate at all,” Green said. “They could only communicate well through typing; but the smile on someone’s face and the twinkle in their eye cannot be seen or felt by text message.” Effective communication is essential to the success of any relationship, but experts are divided on whether technology helps or hinders interpersonal connections. “The bottom line is we’re not going to fight technology. The digitization of millennials’ social and romantic lives has changed everything. Technology acts as a crutch for many millennials. Loading Slideshow