80+ Google Forms for the Classroom 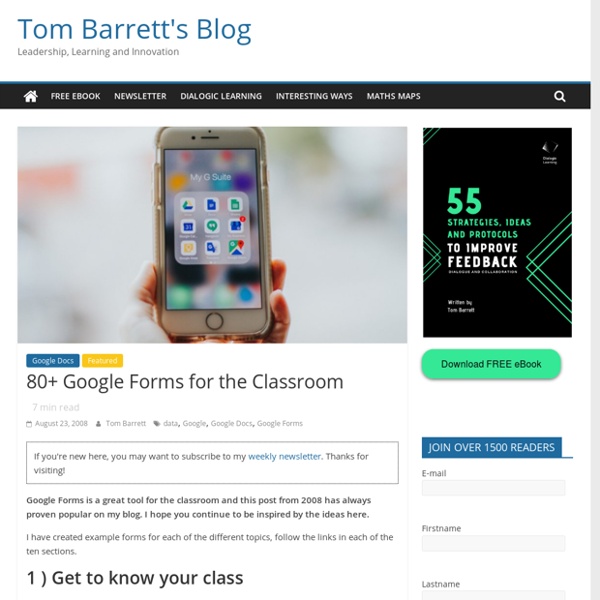 Google Forms is a great tool and I hope to use it more throughout this year. Take a look here for a more detailed introduction and guide to using and creating a Google Form – this was written prior to Google bringing forms into the NEW menu. I have created example forms for each of the different topics, follow the links in each of the ten sections. With help from a Googler I have included a link so that you can get your own copy of the form – click on the appropriate link and it should open in your docs home. 1 ) Get to know your class Use this form to gather some indication from your new class about their likes and dislikes, their favourite lessons or after school clubs they enjoy. 2 ) Emotion graph An emotion graph is a simple line graph comparing a range of happiness to sadness against different points (time) in a story or film. 3 ) Spelling test 4 ) Comprehension questions 5 ) Weekly reading record 6 ) Maths data handling 7 ) Guided reading record 8 ) Prior learning assessment Tom Barrett

Overview - Welcome to Flubaroo The grades created by Flubaroo will be located in an adjacent worksheet called "Grades", as shown: For each submission, Flubaroo will show which questions were answered correctly ("1" point"), which incorrectly ("0" points), and which were not graded. If less than 60% of students got a question correct, the question will be highlighted in orange to alert you. Additionally, students who scored less than 70% on the assignment will be highlighted in red.

Interactive Graphic Organizer Holt Interactive Graphic Organizers "Graphic organizers are tools that help your brain think." - Kylene Beers Graphic organizers are an illustration of your thoughts on paper. Confessions of a Teacher Who Doesn't Believe In Education  I was one of those people that always knew what I wanted to be when I "grew up". I wanted to teach. Asking children, and teenagers what they want to be when they grow up , or what they want to major in when they graduate high school, is a pretty common question.

Overview - Welcome to Flubaroo The grades created by Flubaroo will be located in an adjacent worksheet called "Grades", as shown: For each submission, Flubaroo will show which questions were answered correctly ("1" point"), which incorrectly ("0" points), and which were not graded. If less than 60% of students got a question correct, the question will be highlighted in orange to alert you. Additionally, students who scored less than 70% on the assignment will be highlighted in red. The Flubaroo menu will now offer you the ability to email each student their grades, view a summary report, or regrade the assignment. You might want to regrade the assignment if more students submitted answers, or if you want to throw out a question that most students got wrong.

15 Tech Tool Favorites From ISTE 2016 The International Society for Technology in Education (ISTE) conference brings together a huge cross section of educators who share a common belief that technology in the classroom can make learning more relevant, engaging and fun for kids. Among the 20,000 or so conference-goers are ed-tech evangelists, teachers new to technology, passionate makers and many others. Educators at the conference are looking for new ideas and tools to bring back to their districts and classrooms. Monica Martinez creates professional development for the EdTechTeam, a partner of Google For Education. She has tried and vetted many of the apps available to teachers on many different platforms and has compiled an in-depth list of resources that can help educators find what they need.

View and manage form responses - Drive Help View responses Once you’ve created your form and sent it to recipients, you’re able to view the responses you’ve received in three different ways: as a summary of responses, in a separate spreadsheet, or as a downloaded CSV. If you’d like a broad overview of how your group of respondents answered each question, viewing the summary is the way to go. Frayer Model The Frayer Model is a vocabulary development tool. In contrast with a straight definition, the model helps to develop a better understanding of complex concepts by having students identify not just what something is, but what something is not. The center of the diagram shows the concept being defined, while the quadrants around the concept are used for providing the details. Words that work well with the Frayer Model include quadrilaterals, insects and democracies.

Defining "Best Practice" in Teaching It's often said in the teaching world (as in many professions and trades, I imagine), "Why reinvent the wheel when there are plenty of practices that already work?" In their book, Professional Capital: Transforming Teaching in Every School, Andy Hargreaves and Michael Fullan share their definition for "best practices," which they define as existing practices that already possess a high level of widely-agreed effectiveness. We teachers are standing on the shoulders of giants before us who have developed tried-and-true strategies by testing them out, reflecting on the outcomes, and honing those strategies over decades or longer. And they work; they get results. What are some of the best pedagogical practices I've adopted over the years from my mentors and guides in this field?

k12 Start Computer and Technology Skills: Microsoft Office and MORE! Series Ever want to learn about all the online tools that you might find on your computer? Well, here's your chance! Learning Leading Change: EduTECH Day One: Open Schools for globally connected learning David Price is the author of the fabulous book Open and Larry Rosenstock is the director of High a Tech High. Autonomy is the new mantra. Price spoke about the fact that the need for change is escalating, referring to examples such as global warning as an issue showing the need to address wider world issue before it's too late. 2020 50% of all jobs will be freelance.