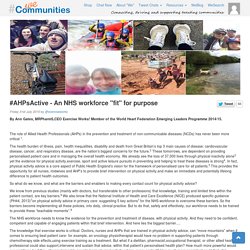 Member of the World Heart Federation Emerging Leaders Programme 2014/15. The role of Allied Health Professionals (AHPs) in the prevention and treatment of non-communicable diseases (NCDs) has never been more critical 1. The health burden of illness, pain, health inequalities, disability and death from Great Britain’s top 3 main causes of disease: cardiovascular disease, cancer, and respiratory disease, are the nation’s biggest concerns for the future.2 These tomorrows, are dependent on providing personalised patient care and in managing the overall health economy. We already see the loss of 37,000 lives through physical inactivity alone3 yet the evidence for physical activity,exercise, sport and active leisure pursuits in preventing and helping to treat these diseases is strong4. Slimming World reveals wealth of knowledge and data that can help tackle obesity crisis. Interview with Dr Jacquie Lavin, Head of Nutrition & Research, Slimming World. 1/ What areas does Slimming World’s research cover? 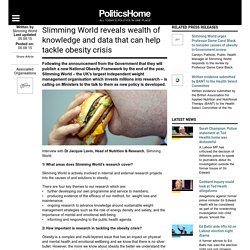 We Communities. Public parks for public benefit. We’re at a turning point in public services. 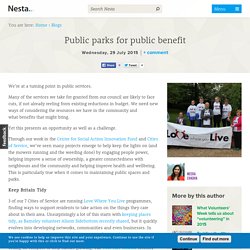 Many of the services we take for granted from our council are likely to face cuts, if not already reeling from existing reductions in budget. We need new ways of considering the resources we have in the community and what benefits that might bring. Five urban design mistakes that create unhealthy and inactive communities. We all want to be fit, healthy and happy but the best intentions – whether it’s to jog to the shops, eat a balanced diet or strike a better work-life balance – can often elude us. 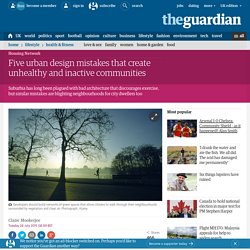 At least some of the blame can be laid at the feet of those who design the city spaces some of us call home. Many aspects of city living discourage the kinds of lifestyles that can contribute to our health and wellbeing. Urban commons have radical potential – it's not just about community gardens. We must fight to make our cities healthy places to live. Cities fit for people, rather than exhaust pipes; cities where residents are happier, have improved physical and mental wellbeing, sleep better, live longer. 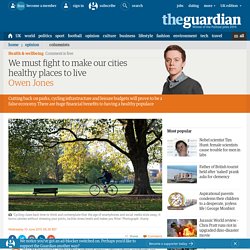 We must fight to make our cities healthy places to live. Cities fit for people, rather than exhaust pipes; cities where residents are happier, have improved physical and mental wellbeing, sleep better, live longer. 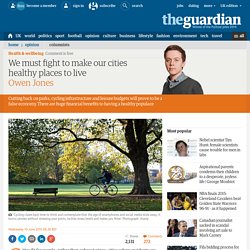 In our age of deficit fetishism, the success of a policy is judged by its economic returns, rather than whether it improves the lives of living, breathing human beings. But a new study suggests that cities that invest in encouraging their citizens to be physically active reap both financial and human rewards. How can we rebuild trust in democracy? The recent general election saw the highest turnout since 1997, yet one in three people still chose not to vote. 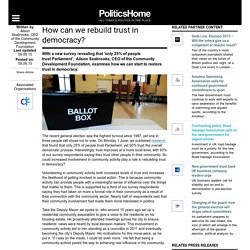 On Monday 1 June, we published research that found that only 25% of people trust Parliament, yet 50% trust the overall democratic process. Interestingly, trust improves at a more local level, with 93% of our survey respondents saying they trust other people in their community. So could increased involvement in community activity play a role in rebuilding trust in democracy? Volunteering in community activity both increases levels of trust and increases the likelihood of getting involved in social action. Cities with physically active residents more productive as well as healthier.

Cities in which residents are physically active have a big advantage over their more sedentary rivals, with better economic productivity, higher property values and improved school performance, as well as a healthier population. 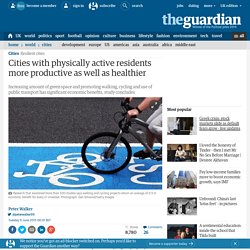 In an increasingly globalised, competitive and mobile world, cities have an economic imperative to promote walking, cycling and public transport, as well as increasing the amount of green space and curbing car use, according to a report from the University of California. The research examined more than 500 existing studies from 17 countries to seek an overall picture of the effect of increased physical activity on a city. It found in particular that schemes to promote walking and cycling had a massive impact, with one UK study finding local trade can be boosted by up to 40% in an area where more people walk.

Community Wellbeing. How do the places we live, and our participation in local decision-making, influence personal and community wellbeing? 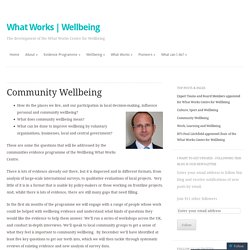 What does community wellbeing mean? What can be done to improve wellbeing by voluntary organisations, businesses, local and central government? Trust in Democracy: how community groups bridge the gap between people and politics. Government urged to let councils set tax rates on homes. In a report published today, think-thank CentreForum argued that reform was needed to address the issue of council tax values still being based on 1991 values, and to address calls for residents in higher-value properties to pay more. 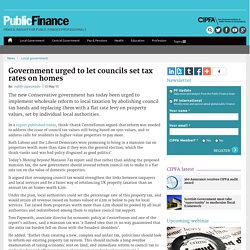 Both Labour and the Liberal Democrats were promising to bring in a mansion tax on properties worth more than £2m if they won the general election, which the think-tanks said was bad policy disguised as good politics’. Today’s Moving beyond Mansion Tax report said that rather than adding the proposed mansion tax, the new government should instead reform council tax to make it a flat rate tax on the value of domestic properties. FSEM News - (FSEM) Faculty of Sport and Exercise Medicine. 20 May 2015 The Faculty of Sport and Exercise Medicine UK (FSEM) welcomes a new bill by the French National Assembly requiring GPs to prescribe exercise for patients with diabetes, cancer or cardiovascular disease via publicly funded sports clubs. According the World Health Organisation (WHO) physical inactivity is one of the leading risk factors for health and is estimated to attribute to one million deaths (about 10 % of the total), per year in the WHO European Region.

More than half of the Region's population is not active enough to meet health recommendations - 30 minutes/day of moderate activity on most week days.* Dr Roderick Jaques, President of the Faculty of Sport and Exercise Medicine UK comments: “Addressing the prevention, management and recovery from disease through prescribed exercise provides a fresh approach to avoidable diseases like cancer, diabetes, heart disease and many common musculo-skeletal conditions. Ends **The FSEM The Nation’s Hidden Health Threat April 2015. Fat parents must 'shape up or face music', head of NHS warns. He said: “It’s a no brainer – pull out all the stops on prevention, or face the music.” The NHS chief was speaking alongside Prime Minister David Cameron who was announcing plans for thousands more doctors to help run a seven-day health service.

The good citizen. Disillusioned with the advertising business, Jon Alexander set up the New Citizenship Project to encourage a move away from consumption and toward participation. Whatever you do, don’t mention the word ‘consumer’ around Jon Alexander. While the term is liberally used in any conversation involving marketers and market researchers, often just a lazy catch-all shorthand, for Alexander it is terminology that should be prohibited.

Physiotherapists call for bigger role in delivering healthcare changes. Eight things the new government should prioritise for the NHS. 1. Commit to the Five Year Forward View. The dangers of eco-gentrification: what's the best way to make a city greener? Prevention is better than cure if we want to save the NHS - Comment - Voices - The Independent. Landscape Institute. A body of evidence is growing that quantifies the public benefits of parks, and at the same time, explicitly details the loss of community benefits if severe budget cuts continue. Green Society: Policies to improve the UK’s green spaces. Liberal Democrats' Five Green Laws will create a stronger economy and a fairer society - 27 Apr 2015. Green Spaces in the Liberal Democrat Manifesto — Greener, Cheaper. Birmingham capitalises on running to tackle obesity problem.

Garden cities: can green spaces bring health and happiness? The Parks Alliance comments on the Fabian Society’s new report, Places to Be : Pro Landscaper. Health Proposals. Three million new volunteers? The Conservative Party Manifesto published this week outlines a number of proposals for building the Big Society alongside a claim that. Our Reaction To Party Manifestos. What the general election manifestos have in store for the voluntary sector. Landscape Institute. Landscape Institute. Media and Resources - (FSEM) Faculty of Sport and Excercise Medicine.