The Trouble with the Electoral College 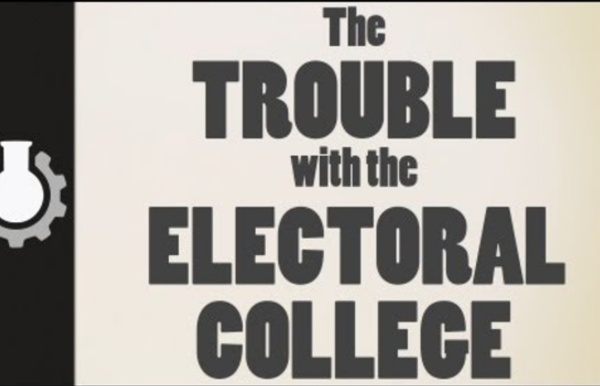 100 days: America in a time of Trump Image copyright Chris Kindred Presidential elections are always something of a national Rorschach test. The reaction to candidates, like the perception of inkblots, helps to divulge the nation's character, underlying disorders and emotional condition. Donald Trump's unexpected victory showed that America had a split personality. It also revealed that, among his 62 million supporters, rage and fear were over-riding emotions.

How America Elects: Who Can Run For President? Accessibility links Languages VOA Learning English How America Elects: Who Can Run For President? PreviousNext Breaking News How the Electoral College Works" Do you remember voting for the president in a mock election in elementary school or junior high? Maybe you selected your candidate at random because you didn't really know the difference between the two (or care). Well, now you're older and wiser and know that who you vote for does make a difference. Or does it? Take the Electoral College, for instance. Every four years, on the Tuesday after the first Monday of November, millions of U.S. citizens go to local voting booths to cast a vote for the next president and vice president of their country.

Identifying the 2020 Battleground States - Electoral Vote Map When we forecast the 2020 electoral map based on the 2018 midterm election results, it becomes very clear that President Trump must wage a two-front war to win re-election in a new set of 2020 battleground states: He must defend the Rust Belt states that sealed his victory in 2016, also defend against clear Republican erosion in the Sunbelt. As former Clinton political director Doug Sosnik told Axios just after the 2018 elections: “Changing demographics and Trump have blown up the electoral map that has dominated American politics since 1992.” Looking Ahead to the 2020 Election Sosnik projects that there could be more tossup states in the South and Southwest than in the Midwest — with almost twice the number of electoral votes at stake. He notes that the midterm elections also showed “that without Hillary atop the ticket, Midwest states like Wisconsin are tough for Trump, and Southern states with rising Hispanic populations are slowly growing more Democratic.”

How America Elects: U.S. Political Parties Accessibility links Languages VOA Learning English How America Elects: U.S. Political Parties The Electoral College - Origin and History by William C. Kimberling, Deputy Director FEC National Clearinghouse on Election Administration In order to appreciate the reasons for the Electoral College, it is essential to understand its historical context and the problem that the Founding Fathers were trying to solve. They faced the difficult question of how to elect a president in a nation that:

Election 2016: Lesson Plans and Digital Resources for Educators This election has been unlike any in modern history. According to a survey of educators by Teaching Tolerance, the campaign’s contentious tone has spilled over into classrooms. Presidential elections are exciting for students and provide an opportunity to discuss and debate a range of issues in the classroom. But this year, that excitement is more likely to turn into conflict.

US Presidential Election, 7-B1 This theme page presents lesson plans and materials to learn about the US presidential election of 2020 in years 6-9 and above (A2-B1) of the Swedish Compulsory School. Related pages: U.S. Government, The USA Now, The Presidential Inauguration 2021 Last edited Jan 6th, 2021 Post Election Day Follow the Race Election Day is held on the Tuesday after the first Monday in November. Grades 3 – 5 | Lesson Plan | Unit Voting! What's It All About? Students explore a variety of sources for information about voting.

Trump’s RNC 2020 opening speech got things off to a dark start President Donald Trump opened the 2020 Republican National Convention on a very dark note, delivering a rally-style speech in Charlotte, North Carolina, that began with him teasing the idea of serving more than two terms and ended with him warning that Democrats intend to steal the election. “If you really want to drive them crazy, you say ‘12 more years,’” Trump began, as the audience chanted “12 more years!” back at him. “Because we caught them doing some really bad things in 2016. Let’s see what happens.” Trump returned to the theme of a stolen election at the end. Why I walked away from Democrats to support President Trump (opinion) A Black man who grew up in the Deep South had that amazing honor -- think about that. My parents had very limited education, but they instilled an indelible value system in me that laid the foundation for me to be successful. They emphasized the importance of working hard, treating others with respect, and always having faith in Almighty God.

Rhetorical Analysis Of Michelle Obama Speech - 822 Words Michelle Obama uses the language of her speech to help her get her message across. Obama does it by carefully selecting her words and speaking in a chatty tone with many interjections. She also makes effective use of forms of appeal and rhetorical devices. Five Techniques That Made Michelle Obama's Speech Emotionally Appealing Michelle Obama’s speech at the Democratic National Convention is earning high marks for its “emotion.” The word—“emotional”—appears in about half a million links to articles about the speech. There are several ways that speakers can incorporate emotion into their presentation, and Michelle Obama used every one of them. The speech is short.