Population Matters » For a sustainable future 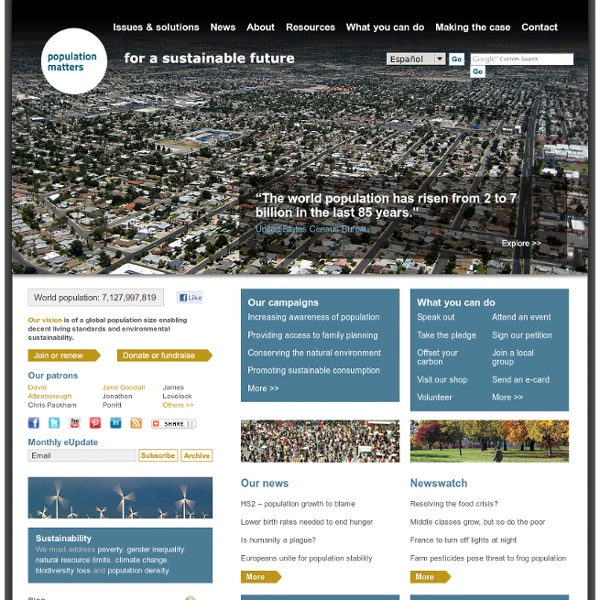 Population awareness We're raising awareness of the cost to humanity and other species of unsustainable human numbers and promoting smaller families as part of a sustainable future. Environmental conservation We're supporting environmental conservation because preserving habitats and ecosystems around the world is essential for the well-being of all species — including our own. Family planning & women's rights We're calling for more rights and access to family planning services for women throughout the world so they can choose for themselves how many children to have and when to have them.

Why Social Sustainability Should Be Part Of Every Business I can’t think of anything that illustrates the human cost of doing business more than the tragedy this past April in Bangladesh. More than 1,100 men, women, and children died when the Rana Plaza building, which housed a number of garment factories, collapsed. Most were garment workers who were ordered by supervisors to report to work, even after inspectors deemed the building unsafe. Millions of people around the world work in dangerous and unhealthy conditions, earning a nominal income to deliver the products we consume. While the factory collapse in Bangladesh is a terrible tragedy, it’s another wake-up call that business leaders need.

Letter from the SHIFT team - Sustainability Showcase Dear reader, Welcome to the first issue of SHIFT magazine! The team at Sustainability Showcase have been beavering away in the background for some time now, and we’re proud to announce the launch of our exciting new magazine. SHIFT magazine is a volunteer-run non-profit magazine whose focus is on examining our global emergency, and strategies for adapting to the future in store for us as the world rapidly changes. Speaking honestly and compassionately about the converging crises of ecological and economic collapse and peak resources, we aim to deliver not just food for thought, but inspiration to practical action. What we need is a shift: a shift in attitude, action, and the trajectory our civilization is on, and SHIFT magazine pulls no punches

Noam Chomsky: Who Owns the Earth? (Photo: Michael Kamber / The New York Times) (This article is adapted from a commencement speech by Noam Chomsky on June 14, 2013, at the American University of Beirut. ) With wrenching tragedies only a few miles away, and still worse catastrophes perhaps not far removed, it may seem wrong, perhaps even cruel, to shift attention to other prospects that, although abstract and uncertain, might offer a path to a better world - and not in the remote future. I’ve visited Lebanon several times and witnessed moments of great hope, and of despair, that were tinged with the Lebanese people’s remarkable determination to overcome and to move forward. The first time I visited - if that’s the right word - was exactly 60 years ago, almost to the day. My wife and I were hiking in Israel’s northern Galilee one evening, when a jeep drove by on a road near us and someone called out that we should turn back: We were in the wrong country.

Hooked on Growth» Blog » One-Child Thinking Jan 17, 2014 This week Huffington Post published a blog by Julie Cole titled 6 Reasons to Have 6 Kids. Im not sure how much attention anyone is paying over there to what their bloggers are doing, but Cole’s piece cannot be defined as “progressive.” Progressive thinking about family size will take into account several factors that go unmentioned in her blog. Dan Miller: Boom or Bust? Greg Dalton Gregory Dalton is chief operating officer at the Commonwealth Club of California and Director of The Club's Climate 1 Initiative. He previously was international editor at The Industry Standard magazine, an editor for the Associated Press in New York, and a correspondent in China and Canada for the South China Morning Post, a Hong Kong newspaper. Proficient in both Mandarin and Cantonese, he is a former term member of the Council on Foreign Relations. Dan Miller

Have a small family « Population Matters Many people today seek to live in a more sustainable and environmentally friendly manner. They travel less, or in ways that cause lower emissions. They use energy efficient methods to heat and power their homes. They recycle what they can and seek to minimise their food miles and food waste. Carbon Fee and Dividend FAQ By Todd J. Smith, Citizens Climate Lobby volunteer Why is this legislation necessary? This legislation will put us on the path of a sustainable climate by reducing our greenhouse gas emissions and transitioning us to a clean energy economy. Since the beginning of the industrial revolution we have increased the level of greenhouse gases, especially carbon dioxide (CO2), in our atmosphere. Scientists warn that this is having a drastic affect on our climate.

5 Ways The Macintosh Changed Creativity Forever In a world in which music videos can be shot on an iPhone, and more design is seemingly done on screen than off, the idea that computers can shape how artists and designers create things seems obvious. But there was a time when computers and art seemed unbridgeable chasms apart. For most people, the Apple Macintosh--which launched 30 years ago this month--helped cross that gap, and made the design world all the better for it. What follows are five ways that Apple’s desktop computer helped change creativity forever. The Mac Turned Computers Into Tools For Creating Art Just a few decades before the Macintosh, computers filled entire rooms, weighed 50 tons, and came without monitors.

Tips: Heating and Cooling Heating and cooling your home uses more energy and costs more money than any other system in your home -- typically making up about 54% of your utility bill. No matter what kind of heating and cooling system you have in your house, you can save money and increase your comfort by properly maintaining and upgrading your equipment. But remember, an energy-efficient furnace alone will not have as great an impact on your energy bills as using the whole-house approach. By combining proper equipment maintenance and upgrades with recommended insulation, air sealing, and thermostat settings, you can cut your energy use for heating and cooling -- and reduce environmental emissions -- from 20%-50%. Heating and Cooling Tips Long-Term Savings Tips

Fee and dividend A coal power plant in Germany. Fee and dividend will make fossil fuels - coal , oil , and gas - less competitive as fuel than other options. Fee and dividend is a revenue-neutral mechanism designed to impose a progressive fee on carbon emissions and return the fee to the public, which has been proposed as an alternative method of reduction in fossil fuel use to cap and trade , carbon tax or emissions trading mechanisms. This mechanism is designed to maintain economic function while encouraging transition to a sustainable energy economy while simultaneously reducing CO 2 emissions .