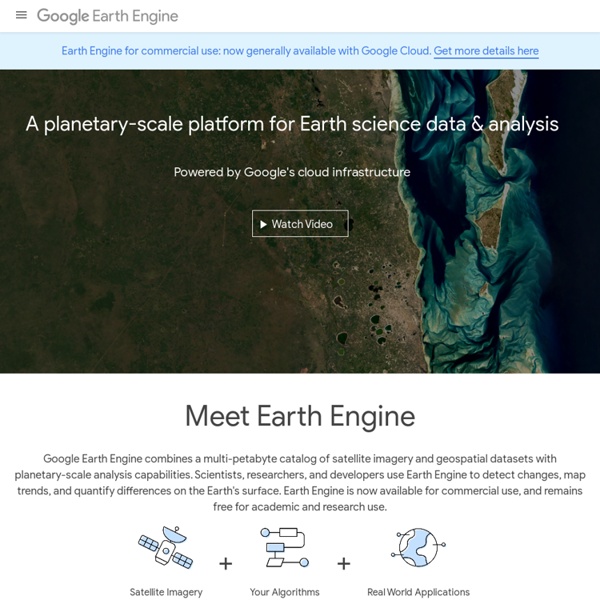 Earth Engine Access Develop, access and run algorithms on the full Earth Engine data archive, all using Google's parallel processing platform. Access to Earth Engine is currently available as a limited release to a small group of partners. If you are interested in developing on the Earth Engine platform, let us know. Google Earth Engine brings together the world's satellite imagery — trillions of scientific measurements dating back almost 40 years — and makes it available online with tools for scientists, independent researchers, and nations to mine this massive warehouse of data to detect changes, map trends and quantify differences on the Earth's surface. Applications include: detecting deforestation, classifying land cover, estimating forest biomass and carbon, and mapping the world’s roadless areas. New! Explore different views into this global timelapse built from global, annual composites of Landsat satellite images. Growth of Las Vegas, Nevada Amazon Deforestation, Brazil

Getting Started with Android Studio Before installing the Android SDK, you must agree to the following terms and conditions. Terms and Conditions This is the Android Software Development Kit License Agreement 1. Introduction 1.1 The Android Software Development Kit (referred to in this License Agreement as the "SDK" and specifically including the Android system files, packaged APIs, and Google APIs add-ons) is licensed to you subject to the terms of this License Agreement. lapse: Landsat Satellite Images of Climate Change, via Google Earth Engine TIME and Space | By Jeffrey Kluger Editors note:On Nov. 29, 2016, Google released a major update expanding the data from 2012 to 2016. Read about the update here. Spacecraft and telescopes are not built by people interested in what’s going on at home. Rockets fly in one direction: up.

Education Express Check out the following NASA opportunities for the education community. Full descriptions are listed below. Global Precipitation Measurement Mission Launch — Educational ResourcesAudience: All Educators Launch Date: Feb. 27, 2014. Coverage begins at Noon EST Student Presentations to Stream Live From National Space Grant Directors’ Meeting Audience: Higher Education Faculty and Students Event Date: Feb. 27-28, 2014 Free Webinar Series — NASA STEM Mania: STEM in Sports Audience: K-12 Educators Next Webinar Date: Feb. 27, 2014, at 4 p.m. Amazon hid a full app store in its Android app for six weeks and no one noticed Back on September 9th of this year, Amazon released a big update to its main Android app, which lets you purchase things from your phone. That update added the ability to stream Prime Instant Video content on Android smartphones, albeit with a rather clunky set up process. Amazon was very vocal in touting the new Prime Instant Video features in its press release announcing them, but it didn't mention the fact that you can now download and install Android apps directly from Amazon's main app — no install of the separate Amazon Appstore needed. That little feature has flown under the radar for about six weeks or so, until TechCrunch discovered it earlier today. The current Amazon Android app has a section for Apps & Games from which you can just buy and install any Android app Amazon offers.

The Large Hadron Collider The Large Hadron Collider (LHC) is the world’s largest and most powerful particle accelerator. It first started up on 10 September 2008, and remains the latest addition to CERN’s accelerator complex. The LHC consists of a 27-kilometre ring of superconducting magnets with a number of accelerating structures to boost the energy of the particles along the way. Astronomy & Space Astronomy may well be the oldest science of all, seeking answers to questions such as: "Where did it all come from?" and "Are we alone?" But, today's astronomers are focusing on phenomena our forbearers never imagined—planets orbiting other stars, for example; black holes the size of our solar system; galaxies being driven apart by invisible "dark energy"; ripples in the fabric of space and time; and of course the big bang, where time itself began.

Mercury (planet) First planet from the Sun in the Solar System Name and symbol Physical characteristics Internal structure Mercury's internal structure and magnetic field Surface geology Pulsar The precise periods of pulsars makes them useful tools. Observations of a pulsar in a binary neutron star system were used to indirectly confirm the existence of gravitational radiation. The first extrasolar planets were discovered around a pulsar, PSR B1257+12. Certain types of pulsars rival atomic clocks in their accuracy in keeping time. History of observation[edit]

Lonely Planet's Best in Travel 2014 - top 10 countries These 10 countries are destined for an epic year, whether they’re hosting festivals, cutting the ribbon on new attractions or simply raising their game for travellers. Feast your eyes on 2014's most unmissable destinations. 1. Brazil Phobos (moon) Phobos (systematic designation: Mars I) is the larger and closer of the two natural satellites of Mars. Both moons were discovered in 1877. Phobos has dimensions of 27 × 22 × 18 km,[1] and is too small to be rounded under its own gravity. Its surface area is slightly less than the land area of Delaware. Phobos does not have an atmosphere due to low mass and low gravity.[10] It is one of the least reflective bodies in the Solar System.