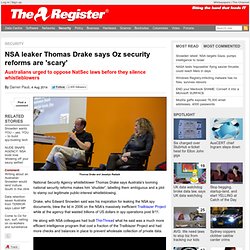 Drake, who Edward Snowden said was his inspiration for leaking the NSA spy documents, blew the lid in 2006 on the NSA's massively inefficient Trailblazer Project while at the agency that wasted billions of US dollars in spy operations post 9/11. He along with NSA colleagues had built ThinThread what he said was a much more efficient intelligence program that cost a fraction of the Trailblazer Project and had more checks and balances in place to prevent wholesale collection of private data.

Podcast: Listen to Drake's talk at the Ruxmon security event last week. "It will send an extraordinarily stark message; 'even if you see something bad, just shut up'. " Australia to retain telecommunications metadata. Build a business case: developing custom apps Australia will enact laws that compel telecommunications providers to retain metadata about their customers' online activities for two years. 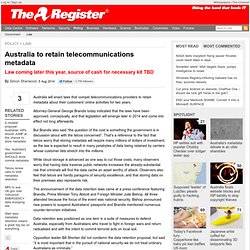 Attorney-General George Brandis today indicated that the laws have been approved, conceptually, and that legislation will emerge later in 2014 and come into effect not long afterwards. But Brandis also said “the question of the cost is something the government is in discussion about with the telcos concerned”. First Dog: Facts about how data retention is bad in an easy and fun to consume format! How far can you go to lawfully protect yourself in a home invasion? Over the weekend, New South Wales police charged a man with murder after an alleged burglar died following an incident in the man’s home in the early hours of Saturday. 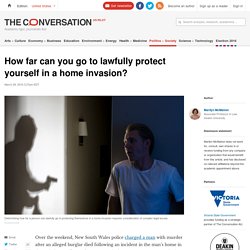 Conversely, in a separate case, committal proceedings are continuing against two men charged with murder allegedly committed during a home invasion in Western Sydney in 2014. How far can homeowners lawfully go to protect themselves in a home invasion in Australia? Where is the line drawn between self-help and vigilantism? What is home invasion? “Home invasion” is a popular rather than legal term. Australia has no specific offence of “home invasion”. However, two states – South Australia and Western Australia – have laws that deal specifically with the issue of self-defence to home invasion. Self-defence, defence of property, and home invasion. Yanis Varoufakis: Australia's negative gearing is 'scandalous' There are two seats to choose from: a deep, soft black-leather couch, or a red one that has the utilitarian look of a school chair. 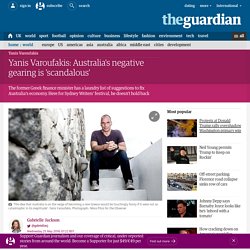 Yanis Varoufakis – a man who has described himself as an “erratic Marxist” – chooses the red, and somehow it is obvious that he, with his vibrant purple shirt and erect posture, would never have deigned to sit in that sprawling old couch. The former Greek finance minister is in town for the Sydney Writers’ festival to promote his new book, And the Weak Suffer What They Must? , and he’s touched down at an excellent time for an interview: on the verge of an election, Australia is having the most fervent debate about fairness that it’s had in decades.

Who better to intervene than Varoufakis – a man who, in challenging European elites to be fair to his bankrupt nation, reached rock star status and was subsequently labelled “the most interesting man in the world”. Varoufakis is quite possibly the man who made fairness fashionable again. Private health insurance premiums to rise by 5.6 per cent in April. Health Minister Sussan Ley says consumers will be better off due to the government's intervention. 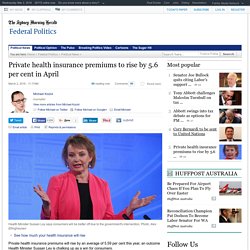 Photo: Alex Ellinghausen See how much your health insurance will rise Private health insurance premiums will rise by an average of 5.59 per cent this year, an outcome Health Minister Sussan Ley is chalking up as a win for consumers. In January, Ms Ley requested insurers to resubmit their applications for premium increases, citing her concern that the process did not allow the government to fully scrutinise an insurer's financial position.

Private health insurers, including Medibank, have been cleared to increase premiums. Twenty Australian funds subsequently lowered their demands, Ms Ley said. In a statement, the minister said consumers would be $125 million better off, and the average family with hospital and general health cover would save $166 a year, thanks to her intervention. No longer tied to Britain, Australia is still searching for its place in the world. This is part of a series examining Australian national identity, especially around the ongoing debate about Australia Day. 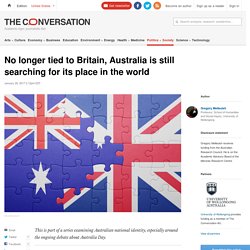 It is worth noting that Australia Day commemorates the dumping of a cargo of the outcasts of Britain on the shores of the Australian continent. It was not an act of escaping religious oppression, as in the case of America, or the founding of a new political order, as in France. British Australia was the creation of an imperial decision. This meant that strong links to Britain, and the British monarchy, continued well into the 20th century.

There were occasional republicans who advocated a so-called independent Australia, particularly in the 19th century, but, if anything, enthusiasm for the British Empire increased in the first half of the 20th century. Australians were Australians, but they were also British.