10 ways to use Google Plus in the classroom 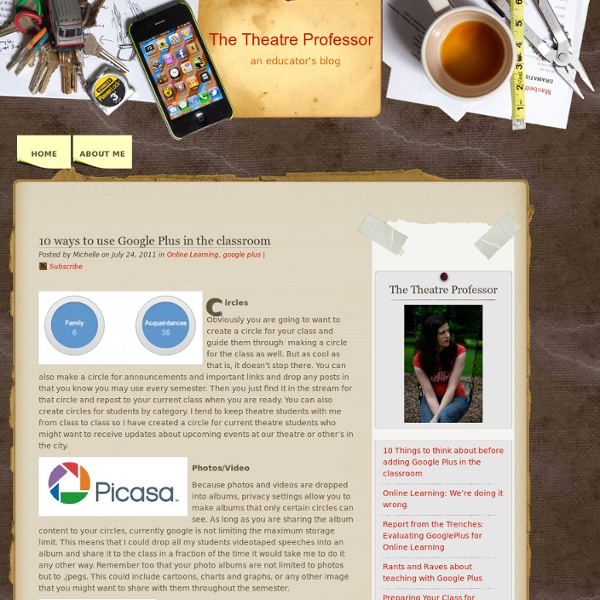 Circles Obviously you are going to want to create a circle for your class and guide them through making a circle for the class as well. But as cool as that is, it doesn’t stop there. You can also make a circle for announcements and important links and drop any posts in that you know you may use every semester. Photos/Video Because photos and videos are dropped into albums, privacy settings allow you to make albums that only certain circles can see. Google Talk Because google is already part of my “always open” tab club it is much easier to set up a place for students to initiate a quick chat session through google rather than the ANGEL chat client or Skype. Ability to control notification methods Google+ alllows the user to determine just how they will be contacted with new material has been posted, messages sent, photos tagged. Mobile apps Google+ now has a mobile app available for iPhone and for Droid. Group Work By creating smaller circles students can work in groups. Hang outs Michelle

Google+: The Complete Guide Using Google+? Add Mashable to your circles. You'll get the latest about new Google+ features and tips and tricks for using the platform as well as top social media and technology news. Guide updated January 18, 2012 Google+: It's the hot social network on the block. Google+, however, isn't the easiest thing to understand. A recent change new and old Google+ users should take note of is Search Across Your World launched on Jan. 10, 2012. Now Google can pull search results from your Google+ friends and material from other Google+ users whom you don't follow who have related content labeled public. We will continuously update this guide as new initiatives such as the Search Across Your World are started, further integrating Google+ into the Google ecosystem. We decided to dig into every aspect of Google+, from Hangouts to Circles, from Google+ Pages to what's next for Google's social network. So, without further ado, here is Mashable's complete guide to Google+: What Is Google+? Profile Photos

25 Google Drive Tips You’ve Probably Never Heard Before | Process Street Recently I moved over from Dropbox to Google Drive and found a few unexpected benefits. At first I had a little trouble managing the space since the 1TB on my Google Drive was bigger than my HDD, but after I got that sorted I started to learn some of the deeper features of Google Drive, some of which are pretty cool. Below is a list of the top tips and tricks I have learned from playing with Google Drive over the last few months. Work Well with Others Google drive got it’s early breaks in the market by being far superior at collaborating with others than any other tool out there. This still holds true today. Publicly Share Documents Not only can you share and collaborate with people you invite, but you can also make documents public. Control Access Levels for Security Just because you want to share and work with others, doesn’t mean you necessarily want people messing with yo sh*t. Chat While Collaborating Search by Person Enhance your Experience with Add-Ons Don’t forget the Apps

Google+ Just Became a Better Option for Educators  Update: An FYI that currently, Google+ is only open to individuals who are 18+. My guess is that when they open the service up to Google Apps users, it will also open to ages 13+. Hopefully that will happen very soon. Today, Google+ came out of its limited field trial and opened up for everyone. That’s big news, but it’s not the biggest news of the day out of Mountain View. Google+ Hangouts just added a slew of new features that make it an even more powerful tool for schools. In addition, Google will be rolling out Hangouts On Air which will provide the ability to broadcast Hangouts to a large number of people and record the session for later viewing. A few weeks ago I wrote about Hangout’s potential in education. Photo courtesy Google.

Using Voice Comments with Google Docs for End of the Year Projects I had a “just in time” professional development moment thanks to Jennifer Roberts and her video titled “Docs Voice Comments.” I wanted to share it with other educators as I know many of us are planning end of the year projects, assignments, and written pieces. These culminating assignments are incredibly time consuming to grade. I also wonder how many of my students carefully read the comments I make on these pieces since they get them back just as the school year ends and summer break begins. Lastly, these end of the year projects are finished products, so covering them with comments or editing directly on them may not be the most effective way to provide feedback. My students are currently working on a Digital Portfolio Project to share the work they have created in our class. I’ve decided to use the voice comments app instead of typing out all of my comments. Follow the steps below to enable the Voice Comments app. Search for “Voice Comments” and connect app to your Drive account.

The Ultimate Google+ Cheat Sheet Google+ is growing like crazy. In fact, it is the fastest growing social network ever. Just as with any other social network, marketers have a lot to learn and do. So we thought we would invest some time into making your life easier. Google+ Vocabulary: Quick Reference Glossary Stream – the list of messages that is displayed on the Google+ home screen and for each Circle of contacts Hangout – a platform for group video chatting and collaboration that is used by Google+ members Circle – the method of organizing connections into groups for more targeted sharing and better privacy Google Profile – your personal home on Google+, which allows you to share interesting, work experiences, personal information, and much more Sparks – the magazine of Google+, which bring together information on a topic for easy viewing. Chat – a method for sending short messages to other Google+ members who are also signed in to Google+ Comment – a response to a user's Google+ post The Basics Google+ vs. Google+ 101

How To Use Google+ Waiting for a Google Plus invite? Google is rolling out the service in waves and you can expect it to become a ubiquitous social option in the coming months. We have been playing with the service since getting invites yesterday and there are a lot of things to like about Google's new social initiative. Unlike Google's last big invite-only rollout of a social initiative - Google Wave - users will not be confounded on just what the heck you are supposed to do with the service when signing up for the first time. From Friendster, Friendfeed, MySpace and Facebook, users are familiar with how a social platform is theoretically supposed to look. Editor's note: This story is part of a series we call Redux, where we're re-publishing some of our best posts of 2011. Create Your Circles Imagine the ability to break down Facebook into its various constituent parts and keep them separate from each other as opposed to one giant feed. The first thing you are going to want to do is set up your circles.