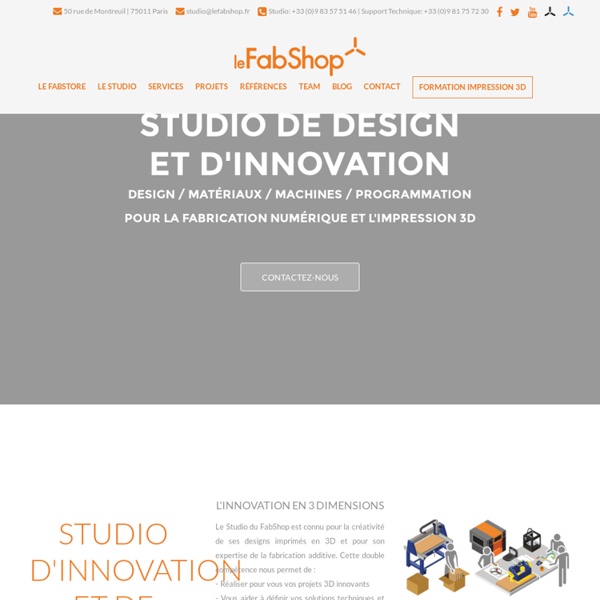 Nouvelles applications d'impression 3D feront leur apparition, un marché de 7 milliards de dollars en 2025 Jun 3, 2014 The global market for 3D printing is set to reach $7 billion by 2025, which includes a conservative estimate of $3 billion for bioprinting, as forecasted by IDTechEx. IDTechEx released a report on May 22nd that outlines how 3D printing processes are being used in various industries today and how industries will be using the technology in the future. The report points out that traditional applications such as prototyping continue to grow but many emerging applications will also be commercialised. "The sudden growth in 3D printing was driven by the expiration of key patents that allowed dozens of small companies to start producing cheap desktop 3D printers for consumers.

Zim, the Zeepro 3D printer with dual head-3D printer Zim is the first personal 3D printer to feature a dual extruders printing head with Ethernet & WiFi connectivity, an onboard micro-camera, smartphone and tablet control, and an exclusive refillable cartridge system. With Zim, 3D printing is about to go mainstream, as everyone from hobbyists to children will now be able to print high quality 3D objects quickly and safely using various materials and colors, at an affordable price. (Affordable 3D printer) The Zim project’s unique features include: Dual printing head The Zim 3D printer is built with one or two extruders.

Professional 3D Printers The Stratasys Idea Series levels the playing field by bringing professional 3D printers to individuals and small teams, accelerating creativity. Making the leap to world-class 3D printing at such a low cost is a revolution on its own. If you’ve ever taken a 3D prototype for a test spin before production, you already know its impact. Cut turnaround time and increase quality by building prototypes right under your own roof with Stratasys Design Series 3D printers.

3D Basics impression: Le Guide du débutant gratuit - Impression 3D industrie Welcome to 3DPI’s Beginner’s Guide to 3D Printing. Whether you are new to 3D printing technology or just looking to close a few knowledge gaps, we’re glad you stopped by. By now, most of us have heard, at some level, about the potential of 3D printing. But with this guide we are offering insights into the history and the reality of 3D printing — the processes, materials and applications — as well as measured thoughts on where it might be heading. We hope you’ll find this to be one of the most comprehensive 3D printing resources available, and that no matter what your skill level is, there will be plenty in here to meet your needs. Are you ready?

teams up with Microsoft HoloLens We are very excited to announce we’ve been working with Microsoft as an official partner of HoloLens, along amazing organizations such as NASA, Disney, Unity and Autodesk. The HoloLens was unveiled in January of this year. This device lets you bring virtual objects and scenes into your own environment, the best of both worlds between VR and AR. Alex Kipman presenting HoloLens partners on stage at Microsoft Build, picture by the Verge Our focus at Sketchfab has always been to provide the best way to publish and find 3D and virtual content, so when we first experienced HoloLens, it immediately felt like a natural fit and a great collaboration opportunity. It was also a natural extension to Microsoft’s initial collection of printable files shared on Sketchfab for the launch of our download option.

The Simple Idea behind This Mind-Blowing 3D Interactive Sandbox Playing in the sandbox used to be my favorite activity as a small child. I remember making pretend volcanos, rivers, lakes, and tunnels in the sand. Well, researchers at UC Davis have come up with a way to bring those imaginary landscapes to life with interactive 3D projection technology. The results are simply breath-taking! When you were a kid, did your sandbox have active volcanoes? This amazing interactive sandbox responds to your actions, and can be built at home using common-place technology.

Neotech lance un nouveau système pour l'électronique d'impression 3D July 22, 2014 The current 3D printers can fabricate objects from plastics, metals, ceramics, etc, but they haven't yet been widely used to produce electronics. Currently several companies are working on using 3D printing to produce electronic components and products. One pioneer is Optomec, which has developed the Aerosol Jet process, a patented printed electronics technology which applies conductive nano-particle inks on to the component. Another company, Germany-based Neotech AMT GmbH, which began developing this novel technology in 2006 has announced Monday the release of a new 3D Printed Electronics system, the LBS 45XE, which is capable of production complex circuitry on almost any 3D surface.