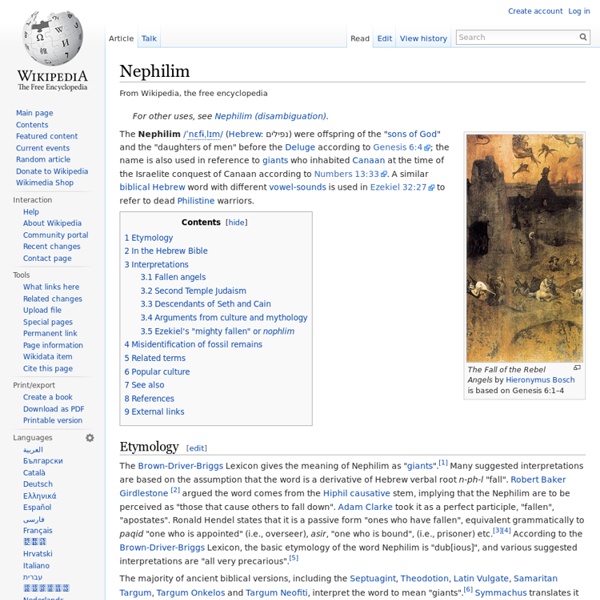 Etymology[edit] In the Hebrew Bible[edit] The term "Nephilim" occurs just twice in the Hebrew Bible, both in the Torah. The second is Numbers 13:32–33, where ten of the Twelve Spies report that they have seen fearsome giants in Canaan. The nature of the nephilim is complicated by the ambiguity of Genesis 6:4, which leaves it unclear whether they are the "sons of God" or their offspring who are the "mighty men of old, men of renown". Interpretations[edit] There are effectively two views[15] regarding the identity of the nephilim, which follow on from alternative views about the identity of the sons of God (Bənê hāʼĕlōhîm): Fallen angels[edit] Main article: Fallen angel Some Christian commentators have argued against this view,[21][22] citing Jesus's statement that angels do not marry.[23] Others believe that Jesus was only referring to angels in heaven.[24] Second Temple Judaism[edit] Descendants of Seth and Cain[edit] Arguments from culture and mythology[edit]

Oahspe index Oahspe, the product of automatic writing by a 19th century dentist named John Ballou Newbrough, is a hallucinogenic reworking of cosmology and ancient history. Written in a pseudo-archaic style, the narrative is told from two viewpoints: that of heaven and earth. For a large part of the book there are parallel texts from each point of view on the top and bottom of the page (hence the page numbers 'a' and 'b'). There are many moving, lucid passages, dealing with ethical and spiritual topics; however these must be sought out. This etext of Oahspe has been brought into conformance with the contents of the third edition of 1912. --J.B. Gabriel In Abrahamic religions, Gabriel (Hebrew: גַּבְרִיאֵל, Modern Gavri'el Tiberian Gaḇrîʼēl, God is my strength; Arabic: جبريل, Jibrīl or جبرائيل Jibrāʾīl) is an angel who typically serves as a messenger sent from God to certain people. In Islam, Gabriel (Jibra'il) is considered one of the four archangels whom God sent with his divine message to various prophets, including Muhammad.[6] The 96th chapter of the Quran, sura Al-Alaq, is believed by Muslims to be the first surah revealed by Gabriel to Muhammad. Judaism[edit] Gabriel is interpreted by the Rabbanim to be the "man in linen" in the Book of Daniel and the Book of Ezekiel. In the Book of Daniel, he is responsible for interpreting Daniel's visions. In Kabbalah, Gabriel is identified with the sephirot of Yesod. Intertestamental literature[edit] The intertestamental period (roughly 200 BCE – 50 CE) produced a wealth of literature, much of it having an apocalyptic orientation. Christianity[edit] New Testament[edit] Gabriel's horn[edit]

How to Read Your Own Birth Chart - Astrology The most important thing to remember while interpreting any birth chart is: synthesis. The whole chart must be taken as a whole. A natal chart abounds with bits and pieces of information about an individual. What we mean is that you cannot take one piece of the chart (for example, Mercury in Sagittarius) and decide that it defines the entire person. The point, again (and this point will be repeated often), is that the entire chart must be blended together. It's as if each of us is a mosaic, made up of tiny individual images. Interpreting Planets in the Signs Look at the birth chart and take note of what sign and house each planet is in. Now you can look up the "Chart Interpretations" of each of your planets and Rising sign. The zodiac sign will show how the planet is manifested. Incorporating the Astrological Houses The other thing to remember is that the planet in the sign will focus on the House. Planet = What? Planets = energies; what you like to do = “What” A Word of Caution

Michael (archangel) Michael ("who is like God?", Hebrew: מִיכָאֵל‎ (pronounced [mixåˈʔel]), Micha'el or Mîkhā'ēl; Greek: Μιχαήλ, Mikhaḗl; Latin: Michael (in the Vulgate Michahel); Arabic: ميخائيل‎, Mīkhā'īl) is an archangel in Jewish, Christian, and Islamic teachings. Roman Catholics, the Eastern Orthodox, Anglicans, and Lutherans refer to him as "Saint Michael the Archangel" and also as "Saint Michael". Orthodox Christians refer to him as the "Taxiarch Archangel Michael" or simply "Archangel Michael". Michael is mentioned three times in the Book of Daniel, once as a "great prince who stands up for the children of your people". In the New Testament Michael leads God's armies against Satan's forces in the Book of Revelation, where during the war in heaven he defeats Satan. "At that time Michael, the great prince who protects your people, will arise." In view of this, Michael is seen as playing an important role as the protector of Israel, and later of the Christian Church. "...there was war in heaven.

Azrael Background[edit] Depending on the outlook and precepts of various religions in which he is a figure, Azrael may be portrayed as residing in the Third Heaven.[3] In one of his forms, he has four faces and four thousand wings, and his whole body consists of eyes and tongues, the number of which corresponds to the number of people inhabiting the Earth. He will be the last to die, recording and erasing constantly in a large book the names of men at birth and death, respectively.[4] He will receive the souls in the graves In Judaism[edit] In Jewish mysticism, he is commonly referred to as "Azriel," not "Azrael." The Zohar (a holy book of the Jewish mystical tradition of Kabbalah), presents a positive depiction of Azriel. In Christianity[edit] There is no reference to Azrael in the Catholic Bible, and he is not considered a canonical character within Christianity. A story from Folk-lore of the Holy Land: Moslem, Christian and Jewish by J. In Islam[edit] In Sikhism[edit] See also[edit]

The Book of Enoch Index Contents Start Reading Page Index Text [Zipped] The Book of Enoch, written during the second century B.C.E., is one of the most important non-canonical apocryphal works, and probably had a huge influence on early Christian, particularly Gnostic, beliefs. Filled with hallucinatory visions of heaven and hell, angels and devils, Enoch introduced concepts such as fallen angels, the appearance of a Messiah, Resurrection, a Final Judgement, and a Heavenly Kingdom on Earth. Interspersed with this material are quasi-scientific digressions on calendrical systems, geography, cosmology, astronomy, and meteorology. This etext has been prepared specially for sacred-texts, and is a great improvement over other versions on the Internet, with the introduction, correct verse numbering, page numbers from the 1917 edition, and intact critical apparatus. Title PageEditors' PrefaceIntroductionAbbreviations, Brackets and Symbols Specially Used in the Translation of 1 Enoch The Book of Enoch The Parables

Anti-Realism Anti-realism in philosophy[edit] Michael Dummett[edit] , without being able to produce any term of which holds. Dummett argues that the intuitionistic notion of truth lies at the bottom of various classical forms of anti-realism. Dummett's writings on anti-realism also draw heavily on the later writings of Wittgenstein concerning meaning and rule following. Anti-realism in the sense that Dummett uses the term is also often called semantic anti-realism. Hilary Putnam's "internal realism"[edit] Despite being at one time a defender of metaphysical realism, Hilary Putnam later abandoned this view in favor of a position he termed "internal realism". Precursors[edit] Doubts about the possibility of definite truth have been expressed since ancient times, for instance in the skepticism of Pyrrho. [edit] Anti-realist arguments[edit] Anti-realism in science[edit] Anti-realism in mathematics[edit] The "epistemic argument" against Platonism has been made by Paul Benacerraf and Hartry Field. See also[edit]

Archangel An archangel /ˌɑrkˈeɪndʒəl/ is an angel of high rank. Beings similar to archangels are found in a number of religious traditions; but the word "archangel" itself is usually associated with the Abrahamic religions of Judaism, Christianity, and Islam. Some branches of the faiths mentioned have identified a group of seven Archangels, but the actual angels vary, depending on the source. Raphael, Gabriel, and Michael are always mentioned; the other archangels vary, but most commonly include Uriel as well, who is mentioned in the book 2 Esdras. In Judaism[edit] There are no explicit references to archangels in the canonical texts of the Hebrew Bible (Old Testament). In Christianity[edit] Guido Reni's Archangel Michael Trampling Satan, 1636. Roman Catholic[edit] In Roman Catholicism, three are honoured by name: GabrielMichaelRaphael Eastern and Oriental Orthodox[edit] Herodion of Patras and Archangel Selaphiel Protestant[edit] Jehovah's Witnesses[edit] Latter Day Saints[edit]

Hephaestus As a smithing god, Hephaestus made all the weapons of the gods in Olympus. He served as the blacksmith of the gods, and was worshipped in the manufacturing and industrial centers of Greece, particularly Athens. The cult of Hephaestus was based in Lemnos.[2] Hephaestus' symbols are a smith's hammer, anvil, and a pair of tongs. Etymology[edit] Hephaestus, is probably associated with the Linear B (Mycenean Greek) inscription 𐀀𐀞𐀂𐀴𐀍, A-pa-i-ti-jo, found at Knossos; the inscription indirectly attests his worship at that time because it is believed that it reads the theophoric name Haphaistios or Haphaistion.[3][4][5] The name of the god in Greek (Hēphaistos), has a root which can be observed in names of places, of Pre-Greek origin.[6] Epithets[edit] Hephaestus is given many epithets. Mythology[edit] The craft of Hephaestus[edit] Parentage[edit] Fall from Olympus[edit] In another account, Hephaestus, attempting to rescue his mother from Zeus' advances, was flung down from the heavens by Zeus.

Raphael (archangel) Raphael (Standard Hebrew רָפָאֵל, Rāfāʾēl, "It is God who heals", "God Heals", "God, Please Heal") is an archangel of Judaism and Christianity, who in the Judeo-Christian tradition performs all manners of healing. In Islam, Raphael is the same as Israfil. Raphael is mentioned in the Book of Tobit, which is accepted as canonical by Catholics, Orthodox, and some Anglo-Catholics, and as useful for public teaching by Lutherans and Anglicans. Raphael is generally associated with the angel mentioned in the Gospel of John as stirring the water at the healing pool of Bethesda. The angels mentioned in the Torah, the older books of the Hebrew Bible, are without names. Raphael is named in several Jewish apocryphal books (see below). Raphael bound Azazel under a desert called Dudael according to Enoch 10:4–6: And again the Lord said to Raphael: 'Bind Azazel hand and foot, and cast him into the darkness: and make an opening in the desert, which is in Dudael, and cast him therein. Tobias and the Angel

CRYPTOSPORIDIA Cryptosporidiosis in Lizards by: Marcia McGuiness © Golden Gate Geckos 2009 Purpose: This provides some facts and common myths about the parasite Cryptosporidium, aka “crypto”, in a comprehensive article targeted for the average lizard keeper, hobbyist, and breeder. Description: There are eleven strains of Cryptosporidium, which is a mutant form of Coccidia. Most reptiles are considered susceptible to Cryptosporidiosis, especially snakes. Crypto affects snakes and lizards differently, and is much more difficult to diagnose in lizards because the symptoms are more elusive than in snakes. Contagion and Transmission: Some experts claim that ALL lizards have Cryptosporidium, but this is completely unfounded and false. When uninfected reptiles share water and food bowls with infected animals, they can ingest crypto oocysts. Clinical Symptoms: Many reptiles are asymptomatic (no symptoms) but are known to be carriers of Cryptosporidium. The progressive symptoms of Crypto in lizards are: - lethargy