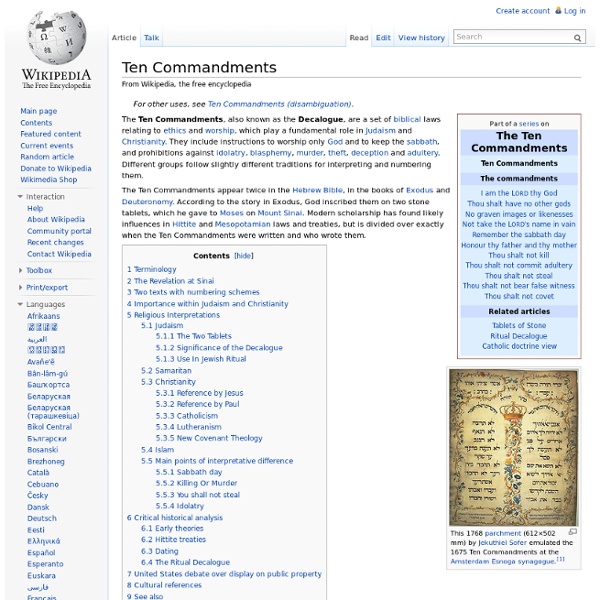 The Ten Commandments, also known as the Decalogue, are a set of biblical principles relating to ethics and worship, which play a fundamental role in Judaism and Christianity. They include instructions to worship only God and to keep the sabbath, and prohibitions against idolatry, blasphemy, murder, theft, dishonesty, and adultery. Different groups follow slightly different traditions for interpreting and numbering them. Terminology[edit] In biblical Hebrew, the Ten Commandments are called עשרת הדברים (transliterated Asereth ha-D'bharîm) and in Rabbinical Hebrew עשרת הדברות (transliterated Asereth ha-Dibroth), both translatable as "the ten words", "the ten sayings" or "the ten matters".[2] The Tyndale and Coverdale English translations used "ten verses". The stone tablets, as opposed to the commandments inscribed on them, are called לוחות הברית: Luchot HaBrit, meaning "the tablets of the covenant". Story in Exodus and Deuteronomy[edit] Traditions for numbering[edit] Traditions: Judaism[edit]

Poseidon There is a Homeric hymn to Poseidon, who was the protector of many Hellenic cities, although he lost the contest for Athens to Athena. According to the references from Plato in his dialogue Timaeus and Critias, the island of Atlantis was the chosen domain of Poseidon.[4][5][6][7] Etymology The earliest attested occurrence of the name, written in Linear B, is 𐀡𐀮𐀆𐀃 Po-se-da-o or 𐀡𐀮𐀆𐀺𐀚 Po-se-da-wo-ne, which correspond to Poseidaōn and Poseidawonos in Mycenean Greek; in Homeric Greek it appears as Ποσειδάων (Poseidaōn); in Aeolic as Ποτειδάων (Poteidaōn); and in Doric as Ποτειδάν (Poteidan), Ποτειδάων (Poteidaōn), and Ποτειδᾶς (Poteidas).[8] A common epithet of Poseidon is Γαιήοχος Gaiēochos, "Earth-shaker," an epithet which is also identified in Linear B tablets. Another attested word 𐀁𐀚𐀯𐀅𐀃𐀚, E-ne-si-da-o-ne,[9][10] recalls his later epithets Ennosidas and Ennosigaios indicating the chthonic nature of Poseidon.[11] The origins of the name "Poseidon" are unclear. Birth

Holy Grail How at the Castle of Corbin a Maiden Bare in the Sangreal and Foretold the Achievements of Galahad: illustration by Arthur Rackham, 1917 The Holy Grail is a dish, plate, stone, or cup that is part of an important theme of Arthurian literature. A grail, wondrous but not explicitly holy, first appears in Perceval le Gallois, an unfinished romance by Chrétien de Troyes:[1] it is a processional salver used to serve at a feast. Chrétien's story attracted many continuators, translators and interpreters in the later 12th and early 13th centuries, including Wolfram von Eschenbach, who makes the grail a great precious stone that fell from the sky. Origins[edit] The Grail was considered a bowl or dish when first described by Chrétien de Troyes. Beginnings in literature[edit] Chrétien de Troyes[edit] Chrétien refers to his object not as "The Grail" but as "a grail" (un graal), showing the word was used, in its earliest literary context, as a common noun. Robert de Boron[edit] Early forms[edit]

Scientists draw ancient squid using its own 150 million-year-old ink | MNN -... An ancient squid was so remarkably well-preserved, that scientists were able to draw a picture of it using its own 150 million-year-old ink. The remains of a Belemnotheutis antiquus were found by paleontologists during a dig in Wiltshire, England, when they cracked open what looked like an ordinary rock. What they found inside was anything but ordinary. After mixing the powdery one-inch-long black ink sac with an ammonia solution, the ink they created was of good enough quality to draw the squid-like creature and write its Latin name. "Normally you would find only the hard parts like the shell and bones fossilized but there are a handful of locations around the world where soft preservation of the muscle, guts and gills has taken place,” leader of the excavation Dr. "We think that these creatures were swimming around during the Jurassic period and were turned to stone soon after death. "We felt that drawing the animal with it would be the ultimate self-portrait,” said Wilby.

Skeleton Squadron & Ancient Shore La Galerie de paléontologie et d’anatomie comparée, Part 1 The Gallery of Comparative Anatomy, as seen from near the entrance ... After quite a long hiatus from posts about museum exhibits, this seemed like a good time to get back into the subject. We have visited some strange and wondrous museums in the past few months, but the strangest and most wondrous of all has to be this old museum close to the Gare d’Austerlitz in Paris. ... and from above. The Galerie de paléontologie et d’anatomie comparée opened for the 1900 Paris world’s fair, as did many other exhibit venues. The Jardin des Plantes is overseen by a statue of the famous biologist J. This place is an absolute wonder. Entrance side of the Galerie de paléontologie et d'anatomie comparée. We visited during the peak of this summer’s July heatwave. If you want to see more of this Paris museum, please see Ghost Giants, about the fossil vertebrates, and Life’s Dusty Attic, about fossil invertebrates. ... such as these bear brains ...

Ancient City Found in India, Irradiated from Atomic Blast Radiation still so intense, the area is highly dangerous. A heavy layer of radioactive ash in Rajasthan, India, covers a three-square mile area, ten miles west of Jodhpur. Scientists are investigating the site, where a housing development was being built. For some time it has been established that there is a very high rate of birth defects and cancer in the area under construction. The levels of radiation there have registered so high on investigators' gauges that the Indian government has now cordoned off the region. The Mahabharata clearly describes a catastrophic blast that rocked the continent. "A single projectile charged with all the power in the Universe…An incandescent column of smoke and flame as bright as 10,000 suns, rose in all its splendor…it was an unknown weapon, an iron thunderbolt, a gigantic messenger of death which reduced to ashes an entire race." A Historian Comments Archeological Investigation provides information Interestingly, Manhattan Project chief scientist Dr J.