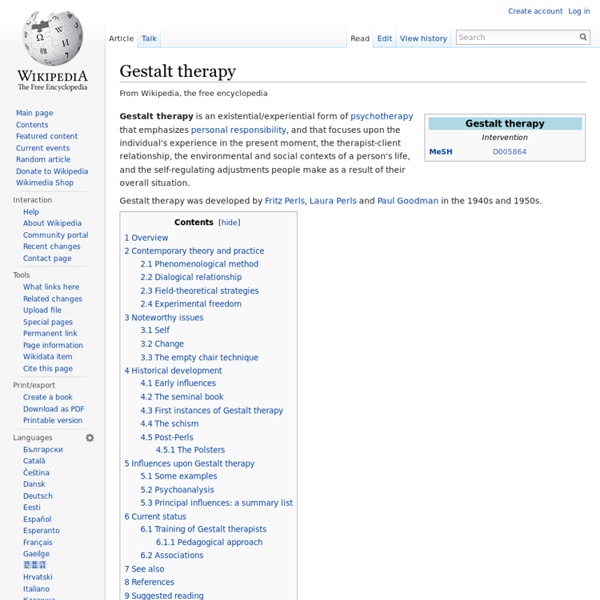 Gestalt therapy is an existential/experiential form of psychotherapy that emphasizes personal responsibility, and that focuses upon the individual's experience in the present moment, the therapist-client relationship, the environmental and social contexts of a person's life, and the self-regulating adjustments people make as a result of their overall situation. §Overview[edit] Edwin Nevis described Gestalt therapy as "a conceptual and methodological base from which helping professionals can craft their practice".[1] In the same volume Joel Latner stated that Gestalt therapy is built upon two central ideas: that the most helpful focus of psychotherapy is the experiential present moment, and that everyone is caught in webs of relationships; thus, it is only possible to know ourselves against the background of our relationship to the other.[2] The historical development of Gestalt therapy (described below) discloses the influences that generated these two ideas. §Experimental freedom[edit]

Case-based reasoning It has been argued that case-based reasoning is not only a powerful method for computer reasoning, but also a pervasive behavior in everyday human problem solving; or, more radically, that all reasoning is based on past cases personally experienced. This view is related to prototype theory, which is most deeply explored in cognitive science. Process[edit] Case-based reasoning has been formalized for purposes of computer reasoning as a four-step process:[1] Retrieve: Given a target problem, retrieve from memory cases relevant to solving it. A case consists of a problem, its solution, and, typically, annotations about how the solution was derived. Comparison to other methods[edit] At first glance, CBR may seem similar to the rule induction algorithms[2] of machine learning. Criticism[edit] Critics of CBR argue that it is an approach that accepts anecdotal evidence as its main operating principle. History[edit] See also[edit] References[edit] For further reading[edit] External links[edit]

Feldenkrais wiki Feldenkrais illustrating the function of the human skeleton in sitting. The Feldenkrais Method, often referred to simply as "Feldenkrais", is a somatic educational system designed by Moshé Feldenkrais (1904–1984). Feldenkrais aims to reduce pain or limitations in movement, to improve physical function, and to promote general wellbeing by increasing students' awareness of themselves and by expanding students' movement repertoire. Approach[edit] Feldenkrais taught that increasing a person's kinesthetic and proprioceptive self-awareness of functional movement could lead to increased function, reduced pain, and greater ease and pleasure of movement. Moshé Feldenkrais (pictured bottom) practising Judo, one of the major influences on his work. Feldenkrais is used to improve movement patterns rather than to treat specific injuries or illnesses. Feldenkrais demonstrating Functional Integration Scientific studies[edit] Certification by Feldenkrais Guild[edit] References[edit] Sources[edit]

Constructive Aspect of Visual Perception: A Gestalt Field Theory Principle of Visual Reification Suggests a Phase Conjugate By Steven Lehar Many Gestalt illusions reveal a constructive, or generative aspect of perceptual processing where the experience contains more explicit spatial information than the visual stimulus on which it is based. The experience of Gestalt illusions often appears as volumetric spatial structures bounded by continuous colored surfaces embedded in a volumetric space. These, and many other phenomena, suggest a field theory principle of visual representation and computation in the brain. That is, an essential aspect of neurocomputation involves extended spatial fields of energy interacting in lawful ways across the tissue of the brain, as a spatial computation taking place in a spatial medium. Introduction There are many aspects of sensory and perceptual experience that exhibit a continuous spatial nature suggestive of a field theory principle of computation and/or representation in the brain. Figure 1. Field Theory Grassfire Metaphor Figure 2. Explicit versus Implicit Representation

Alexander wiki The Alexander technique, named after Frederick Matthias Alexander, teaches people how to stop using unnecessary levels of muscular and mental tension during their everyday activities. It is an educational process rather than a relaxation technique or form of exercise. The Alexander technique has been shown to be helpful for back pain and Parkinson's.[1] There is insufficient evidence to determine if it has any effect in asthma.[2] Practitioners say that such problems are often caused by repeated misuse of the body over a long period of time, for example, by standing or sitting with one's weight unevenly distributed, holding one's head incorrectly, or walking or running inefficiently. The purpose of the Alexander technique is to help people unlearn maladaptive physical habits and return to a balanced state of rest and poise in which the body is well-aligned.[3] History[edit] Alexander was a Shakespearean orator who developed voice loss during his performances. Process[edit] End-gaining

Gestalt psychology Gestalt psychology or gestaltism (German: Gestalt – "shape or form") is a theory of mind of the Berlin School. The central principle of gestalt psychology is that the mind forms a global whole with self-organizing tendencies. This principle maintains that the human mind considers objects in their entirety before, or in parallel with, perception of their individual parts; suggesting the whole is other than the sum of its parts. In the domain of perception, Gestalt psychologists stipulate that perceptions are the products of complex interactions among various stimuli. Origins[edit] Both von Ehrenfels and Edmund Husserl seem to have been inspired by Mach's work Beiträge zur Analyse der Empfindungen (Contributions to the Analysis of Sensations, 1886), in formulating their very similar concepts of gestalt and figural moment, respectively. These laws took several forms, such as the grouping of similar, or proximate, objects together, within this global process. Gestalt therapy[edit] Invariance

Unergi Body-Psychotherapy with Ute Arnold K-line (artificial intelligence) A K-line, or Knowledge-line, is a mental agent which represents an association of a group of other mental agents found active when a subject solves a certain problem or formulates a new idea. These were first described in Marvin Minsky's essay K-lines: A Theory of Memory, published in 1980 in the journal Cognitive Science: When you “get an idea,” or “solve a problem” […] you create what we shall call a K-line. […]…When that K-line is later “activated”, it reactivates […] mental agencies, creating a partial mental state “resembling the original.”[1] "Whenever you 'get a good idea', solve a problem, or have a memorable experience, you activate a K-line to 'represent' it. Minsky, Marvin; The Society of Mind ISBN 0-671-65713-5 March 15, 1998.Minsky, Marvin; Papert, Seymour; Perceptrons: An Introduction to Computational Geometry ISBN 0-262-63111-3 December 28, 1987. Jump up ^ Minsky's "K-lines: A Theory of Memory

Functional fixedness Functional fixedness is a cognitive bias that limits a person to using an object only in the way it is traditionally used. The concept of functional fixedness originated in Gestalt Psychology, a movement in psychology that emphasizes holistic processing. Karl Duncker defined functional fixedness as being a "mental block against using an object in a new way that is required to solve a problem."[1] This "block" limits the ability of an individual to use components given to them to complete a task, as they cannot move past the original purpose of those components. For example, if someone needs a paperweight, but they only have a hammer, they may not see how the hammer can be used as a paperweight. When tested, 5-year-old children show no signs of functional fixedness. Examples in research[edit] Experimental paradigms typically involve solving problems in novel situations in which the subject has the use of a familiar object in an unfamiliar context. Candle box[edit] Two-cord problem[edit]