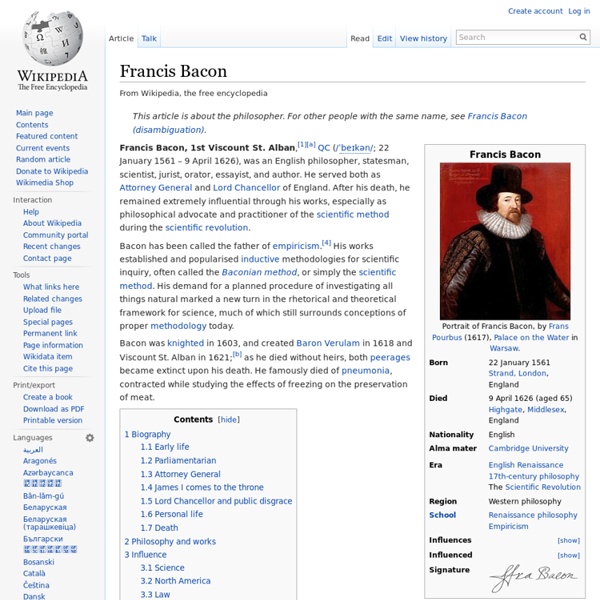 Francis Bacon, 1st Viscount St. Alban,[a] QC (/ˈbeɪkən/; 22 January 1561 – 9 April 1626), was an English philosopher, statesman, scientist, jurist, orator, essayist, and author. He served both as Attorney General and Lord Chancellor of England. Bacon has been called the father of empiricism.[4] His works established and popularised inductive methodologies for scientific inquiry, often called the Baconian method, or simply the scientific method. Bacon was knighted in 1603, and created Baron Verulam in 1618 and Viscount St. Biography[edit] Early life[edit] The 18-year-old Francis Bacon. His studies brought him to the belief that the methods and results of science as then practised were erroneous. The Italianate York Water Gate – the entry to York House, built about 1626, the year of Bacon's death On 27 June 1576, he and Anthony entered de societate magistrorum at Gray's Inn. The sudden death of his father in February 1579 prompted Bacon to return to England. Parliamentarian[edit] Related:  ² vrac1 équipes

Thomas Vaughan Thomas Vaughan may refer to: William Cecil, 1st Baron Burghley "Lord Burghley" redirects here. For other holders of the title, see Baron Burghley. Quartered arms of Sir William Cecil, 1st Baron Burghley, KG Early life[edit] Early career[edit] Cecil, according to his autobiographical notes, sat in Parliament in 1543; but his name does not occur in the imperfect parliamentary returns until 1547, when he was elected for the family borough of Stamford. In 1548, he is described as the Protector's Master of Requests, which apparently means that he was clerk or registrar of the court of requests which the Protector, possibly at Hugh Latimer's instigation, illegally set up in Somerset House to hear poor men's complaints. To protect the Protestant government from the accession of a Catholic queen, Northumberland forced King Edward's lawyers to create an instrument setting aside the Third Succession Act on 15 June 1553. Reign of Elizabeth[edit] Foreign policy[edit] Engraving of Queen Elizabeth I, William Cecil and Sir Francis Walsingham, by William Faithorne, 1655

The Essays by Francis Bacon What is truth? said jesting Pilate, and would not stay for an answer. Certainly there be, that delight in giddiness, and count it a bondage to fix a belief; affecting free-will in thinking, as well as in acting. And though the sects of philosophers of that kind be gone, yet there remain certain discoursing wits, which are of the same veins, though there be not so much blood in them, as was in those of the ancients. But it is not only the difficulty and labor, which men take in finding out of truth, nor again, that when it is found, it imposeth upon men's thoughts, that doth bring lies in favor; but a natural though corrupt love, of the lie itself. One of the fathers, in great severity, called poesy vinum doemonum, because it filleth the imagination; and yet, it is but with the shadow of a lie. Men fear death, as children fear to go in the dark; and as that natural fear in children, is increased with tales, so is the other.

Paracelsus Paracelsus (/ˌpærəˈsɛlsəs/; born Philippus Aureolus Theophrastus Bombastus von Hohenheim, 11 November or 17 December 1493 – 24 September 1541) was a Swiss German[3] Renaissance physician, botanist, alchemist, astrologer, and general occultist.[4] He founded the discipline of toxicology.[5] He is also known as a revolutionary for insisting upon using observations of nature, rather than looking to ancient texts, in open and radical defiance of medical practice of his day.[5] He is also credited for giving zinc its name, calling it zincum.[6][7] Modern psychology often also credits him for being the first to note that some diseases are rooted in psychological illness.[8] His personality was stubborn and independent. He grew progressively more frustrated and bitter as he became more embattled as a reformer.[9] Paracelsus' most important legacy is likely his critique of the scholastic methods in medicine, science and theology. Biography[edit] Philosophy[edit] Contributions to medicine[edit] or

Sir Francis Bacon, who was William Tudor, who was William Shakespeare Meister Eckhart Eckhart came into prominence during the Avignon Papacy, at a time of increased tensions between monastic orders, diocesan clergy, the Franciscan Order, and Eckhart's Dominican Order of Preachers. In later life he was accused of heresy and brought up before the local Franciscan-led Inquisition, and tried as a heretic by Pope John XXII.[note 2] He seems to have died before his verdict was received. He was well known for his work with pious lay groups such as the Friends of God and was succeeded by his more circumspect disciples John Tauler and Henry Suso. Biography[edit] Youth[edit] Eckhart was probably born in the village of Tambach, near Gotha, in the Landgraviate of Thuringia,[3] perhaps between 1250 and 1260.[4] It was previously asserted that he was born to a noble family of landowners, but this originated in a misinterpretation of the archives of the period.[5] In reality, little is known about his family and early life. Church career[edit] Accusation of heresy[edit] Influence[edit]

Robert Cecil, 1st Viscount Cecil of Chelwood Edgar Algernon Robert Gascoyne-Cecil, 1st Viscount Cecil of Chelwood CH, PC, QC (14 September 1864 – 24 November 1958), known as Lord Robert Cecil from 1868 to 1923,[1] was a lawyer, politician and diplomat in the United Kingdom. He was one of the architects of the League of Nations and a defender of it, whose service to the organisation saw him awarded the Nobel Peace Prize in 1937. Early life and legal career[edit] Unionist Free Trader[edit] First World War[edit] Formation of the League of Nations[edit] In September 1916, he wrote and circulated a ‘Memorandum on Proposals for Diminishing the Occasion of Future Wars’ in the Cabinet. In May 1917 Cecil circulated his ‘Proposals for Maintenance of Future Peace’ in which the signatories would agree to keep the postwar territorial settlement for five years, and then here would be a conference to consider and if necessary implement necessary or desirable territorial changes. League of Nations Union[edit] Sir Edward Grey.

Bacon Shaker Heraldry (and other) Observations Within the Play "Hamlet"and the 1623 FF of plays By Francis Bacon West Seattle, Washington May 24, 2001Updated December 14, 2011 "Though this be madness, yet there is method in it." – Hamlet There has been much 'throwing about of brains' as to who wrote the Shakespeare plays and, in particular, The Tragedy of Hamlet, Prince of Denmark. I have often pondered the following information on the symbolism of heraldry used in Act II, scene ii of Hamlet and contemplated the heraldry of Bacon and the heraldry of Shaksper. See if you can draw these various pieces together. Maybe it's much ado about nothing. Shakspere Blazon and Coat of Arms: "Or, on a bend sable, a tilting spear of the field headed argent." — SHAKSPERE, Warwick. A speare's purpose is to shed blood. Note: Hyrcanian beast = Bengal Tiger: sable diagonals on an or fur (Black stripes on golden fur) Bacon Blazon and Coat of Arms: Hamlet, Prince of Denmark Act II, Scene ii (cont.) Ham. Guil. Ham. Ros. Ham.

John of Ruysbroeck The Blessed John of Ruysbroeck (Dutch: Jan van Ruusbroec, Jan (or Johannes) van Ruysbroeck, pronounced [jɑn vɑn rœ.y̯zbruk, ry.zbruk]; 1293 or 1294 – 2 December 1381) was one of the Flemish mystics. Some of his main literary works include The Kingdom of the Divine Lovers, The Twelve Beguines, The Spiritual Espousals, A Mirror of Eternal Blessedness, The Little Book of Enlightenment and The Sparkling Stone. Ruysbroeck also wrote letters and short sayings from some of his oral talks have been recorded by certain of his disciples, such as Jan Van Leeuwan. He wrote in the Dutch vernacular, the language of the common people of the Low countries, rather than in Latin, the language of the Church liturgy and official texts, so as to reach a wider audience. Life[edit] Until his ordination[edit] At the age of eleven he left his mother, departing without leave or warning, to place himself under the guidance and tuition of his uncle, Jan Hinckaert, a canon regular of St. Priest in Brussels[edit]