How to Pick the Perfect Laptop for Video Editing. Here are a few things to consider when picking the perfect portable video editing laptop. 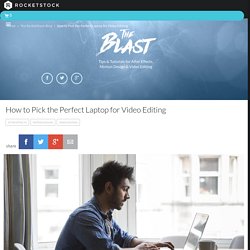 While a designated desktop computer for video editing is ideal, it’s not always convenient to bring your huge desktop computer around, especially if you’re a filmmaker on the go. Here are a few tips for picking out the perfect laptop for video editing. Storage When it comes to video editing, picking the right hard drive is probably the most important decision you will make. There’s often a trade-off between speed and size when it comes to storage, especially if your budget isn’t spectacular. Why Speed is Important For video editors, the speed of the hard drive is important because your hard drive is where all of your programs are stored on your computer. How to best use twixtor for extreme slow motion. I have used twixtor myself for a few projects but I have never had terrific success with it. 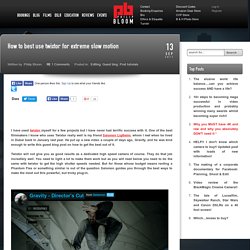 One of the best filmmakers I know who uses Twixtor really well is my friend Salomon Ligthelm, whom I met when he lived in Dubai back in January last year. He put up a new video a couple of days ago, Gravity, and he was kind enough to write this guest blog post on how to get the best out of it. Twixtor will not give you as good results as a dedicated high speed camera of course. They do that job incredibly well. Lightroom time-lapse Tutorial - How to create a time-lapse video using Adobe Lightroom. Grading Tutorial.

LRTimelapse - Home. Lightroom time-lapse Tutorial - How to create a time-lapse video using Adobe Lightroom. Using VSCO With Video. Editing as Punctuation: How 'Punctuation Marks' in Film Have Innovated Storytelling. "The whole eloquence of cinema is achieved in the editing room. 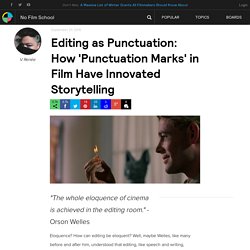 " - Orson Welles Eloquence? How can editing be eloquent? Well, maybe Welles, like many before and after him, understood that editing, like speech and writing, communicates. It contains its own unique language in the form of cuts and transitions that have the ability to introduce new information and ideas. Editing speaks. In this phenomenally insightful video essay, Max Tohline takes a hard look at editing through a very unconventional and brilliant metaphor inspired by a Kathryn Schultz article in Vulture: editing as punctuation. Editing has many jobs, and Tohline highlights them at the beginning of his video, which were taken from the writings of one of the forefathers of the Montage Theory, Sergei Eisenstein. And that's usually how we think of editing -- as a language, as a statement or expression, a string of "words" that help give us new information apart from the audio and visuals. We innovate so we can then speak more.

Hey Editors, This is How You Create an 'OH, F**K' Moment in a Film. "Editing is all about controlling information. 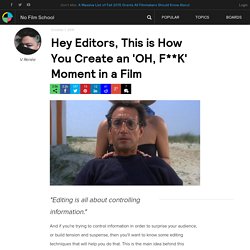 " And if you're trying to control information in order to surprise your audience, or build tension and suspense, then you'll want to know some editing techniques that will help you do that. How To Install Presets. Very basic instructions for uploading presets from within Lightroom. 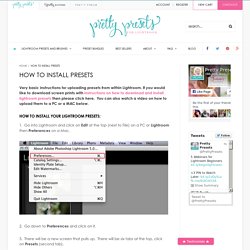 If you would like to download screen prints with instructions on how to download and install lightroom presets then please click here. Film Emulsion Lightroom Presets – Tribe Red Leaf. For Adobe Lightroom 6 (CC), 5 & 4. and ACR Presets for Photoshop CC & CS6. 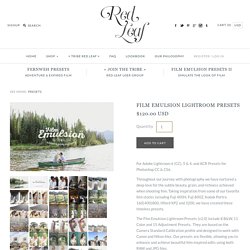 Throughout our journey with photography we have nurtured a deep love for the subtle beauty, grain, and richness achieved when shooting film. Taking inspiration from some of our favorite film stocks including Fuji 400H, Fuji 800Z, Kodak Portra 160|400|800, Illford XP2 and 3200, we have created these timeless presets. The Film Emulsion Lightroom Presets (v2.0) include 8 B&W, 11 Color and 15 Adjustment Presets. They are based on the Camera Standard Calibration profile and designed to work with Canon and Nikon files. Our presets are flexible, allowing you to enhance and achieve beautiful film-inspired edits using both RAW and JPG files. By simply clicking through this set you’ll find a variety of color and black and white options to suit your needs and give your images a film-like look. Lightroom Presets Born From Film. Boyte Creative. Prolost Handcrank for After Effects — Prolost. Adobe Premiere Pro - Loading an Image Sequence and Rendering for Time Lapse.

How to Cut 10 Hours of Footage Down to a Finely-Tuned 3 Minute Film. What do film editing and guitar building have in common? 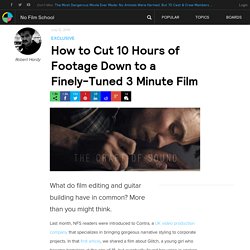 More than you might think. Last month, NFS readers were introduced to Contra, a UK video production company that specializes in bringing gorgeous narrative styling to corporate projects. In that first article, we shared a film about Glitch, a young girl who became homeless at the age of 16, but eventually found her voice in spoken word poetry with a little help from a UK nonprofit called XLP. That article detailed the entire process of bringing Glitch's story to life, from a hasty run and gun production on the RED DRAGON to an edit that was done in 6K RAW. Now our friends at Contra are back at it, this time with a brand new piece about an extremely talented young luthier named Alex Bishop. As mentioned above, the production of this piece took 6 months, resulting in 10 hours worth of footage, which then had to be cut down to three minutes for the finished piece.

He describes the rushes like being the raw materials for the guitar. What Exactly Does an Experienced Editor Do? This Short Animation Reveals Everything. We live in an age where a 6-year-old with a laptop and a copy of iMovie can edit some footage together. 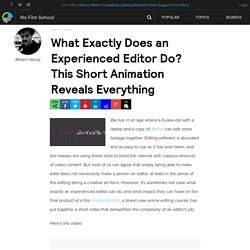 Editing software is abundant and as easy to use as it has ever been, and the masses are using these tools to flood the internet with copious amounts of video content. But most of us can agree that simply being able to make edits does not necessarily make a person an editor, at least in the sense of the editing being a creative art form. However, it's sometimes not clear what exactly an experienced editor can do, and what impact they can have on the final product of a film. Inside the Edit, a brand new online editing course, has put together a short video that demystifies the complexity of an editor's job. Here's the video: Many people who are just learning to edit should take note of the many points of this video. And that, my friends, is what an experienced editor does on a day in and day out basis. How-to Easily Transcribe in Adobe Premiere. This is What Good & Bad Editing is According to 3 Oscar-Winning Editors.

What is "Oscar-worthy" film editing? 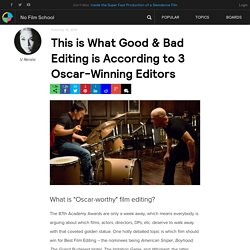 The 87th Academy Awards are only a week away, which means everybody is arguing about which films, actors, directors, DPs, etc. deserve to walk away with that coveted golden statue. One hotly debated topic is which film should win for Best Film Editing -- the nominees being American Sniper, Boyhood, The Grand Budapest Hotel, The Imitation Game, and Whiplash, the latter being a bit of a favorite. Here's a Quick Way to Make Your Edits More Visually Exciting. In an age when anybody is capable of creating an edit, how do you go about differentiating your work from that of everybody else?

If you're editing commercial or corporate projects, you're very likely to encounter the following question from your clients: can you make this edit more visually exciting so that we can portray our company in the most positive light? Although there are many ways to accomplish this feat including quicker cuts, some dynamic graphics, or a color grade that really pops, one extremely quick way is through overlaying animated mattes on top of your footage.

Here's Sean Mullen from Rampant Design Tools to show you just how quick and simple it is. WATCHED. Twixtor slowmotion experiment. (is Twixtor really perfect plug-in to make super slow??)