A Step-By-Step Guide To Building a Trading Bot In Any Programming Language. Javascript. Tutorial: Advanced Max: Standalones, Part 1. Raspberry Pi. Python. Leading Trade Wholesalers. Lighting / DMX. How to create a bootable installer for macOS. You can use an external drive or secondary volume as a startup disk from which to install the Mac operating system. 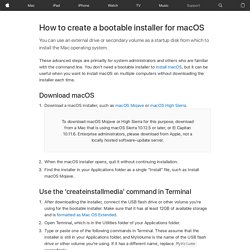 These advanced steps are primarily for system administrators and others who are familiar with the command line. You don't need a bootable installer to install macOS, but it can be useful when you want to install macOS on multiple computers without downloading the installer each time. Download macOS Download a macOS installer, such as macOS Mojave or macOS High Sierra.To download macOS Mojave or High Sierra for this purpose, download from a Mac that is using macOS Sierra 10.12.5 or later, or El Capitan 10.11.6.

Enterprise administrators, please download from Apple, not a locally hosted software-update server.When the macOS installer opens, quit it without continuing installation.Find the installer in your Applications folder as a single ”Install” file, such as Install macOS Mojave. Use the 'createinstallmedia' command in Terminal Use the bootable installer Learn more. 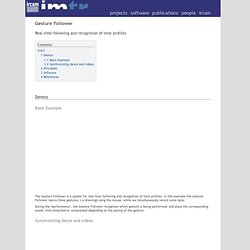 Music Thing: A Radio Sequencer, How to Get Into DIY Synth Modules, How to Have Fun. Lured by the siren song of modular synthesis and DIY electronics, but not sure how to navigate the piles of requisite knowledge – or uncertain what the trip down this rabbit hole might have in store? 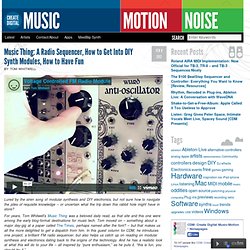 For years, Tom Whitwell’s Music Thing was a beloved daily read, as that site and this one were among the early blog-format destinations for music tech. Shops. 'Sound graffiti' 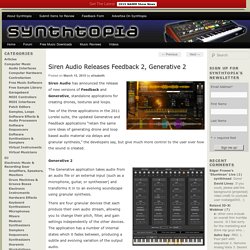 Two of the three applications in the 2011 Lorelei suite, the updated Generative and Feedback applications “retain the same core ideas of generating drone and loop based audio material via delays and granular synthesis,” the developers say, but give much more control to the user over how the sound is created.Generative 2 The Generative application takes audio from an audio file or an external input (such as a microphone, guitar, or synthesiser) and transforms it in to an evolving soundscape using granular synthesis.

There are four granular devices that each produce their own audio stream, allowing you to change their pitch, filter, and gain settings independently of the other devices. Download James Holden's Group Humanizer patch. The Border Community boss shares some Max for Live magic. 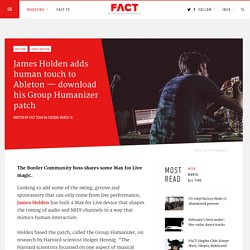 Looking to add some of the swing, groove and spontaneity that can only come from live performance, James Holden has built a Max for Live device that shapes the timing of audio and MIDI channels in a way that mimics human interaction. Holden based the patch, called the Group Humanizer, on research by Harvard scientist Holger Hennig. “The Harvard scientists focussed on one aspect of musical performance – the fine (millisecond level) details of timing when two people play together,” he explains. “What they found was that the timing of each individual note is dependent on every single note that both players had already played – a minor timing hiccup near the start of a piece will continue to affect every single note after it, up to the last notes. And when you play a duet every note your partner plays affects your playing, and every note you play affects your partner: a two directional information transfer is happening.” 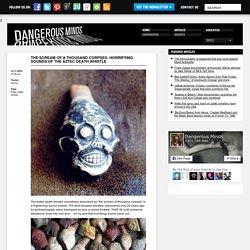 The skull-shaped whistles, discovered only 20 years ago by archaeologists, were dismissed as toys or burial trinkets. THAT IS, until someone decided to blow into one and… oh my god that horrifying sound came out. Ill.GATES INFINITE DRUM RACK - LIVE 9. Welcome to the last drum rack you’ll every truly need. 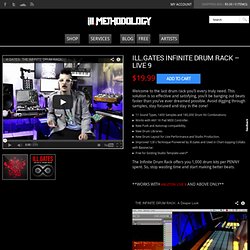 This solution is so effective and satisfying, you’ll be banging out beats faster than you’ve ever dreamed possible. Avoid digging through samples, stay focused and stay in the zone! 11 Sound Types, 1400 Samples and 180,000 Drum Kit Combinations.Works with ANY 16 Pad MIDI Controller.New Push and Automap compatibility.New Drum Libraries.New Drum Layout for Live Performance and Studio Production.Improved 128′s Technique Pioneered by ill.Gates and Used in Chart-topping Collabs with Bassnectar.Free for Existing Studio Template users* The Infinite Drum Rack offers you 1,000 drum kits per PENNY spent.

HUGE Ableton Productivity Hack: Sibling Mapping – AbletonOp. This is the biggest timesaver I’ve discovered so far when it comes to making tracks in Live. 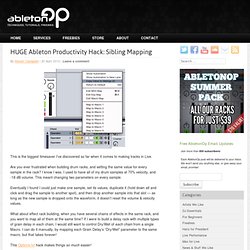 Are you ever frustrated when building drum racks, and setting the same value for every sample in the rack? I know I was. I used to have all of my drum samples at 70% velocity, and -18 dB volume. This meant changing two parameters on every sample. String orchestra: sound reinforcement. Hi there, A few days ago I had the chance to listen to a string orchestra playing outdoors in a sort of small square. 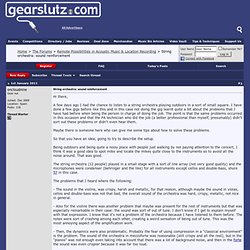 I have done a few gigs before like this and in this case not doing the gig learnt quite a bit about the problems that I have had before when being the person in charge of doing the job. The point is that the same problems occurred in this occasion and that the PA technician who did the job (a better professional than myself, presumably) didn't sort out these problems or didn't even hear them. Maybe there is someone here who can give me some tips about how to solve these problems. S C O T T P E T E R S E N ∞ E L M U C O ∞ S C A C I N T O . C O M. In preparation for our instrument making workshop at Artspace New Haven on December 13th, your intrepid guides Brian and Scott spent a foggy Sunday afternoon making contact mics from scratch. 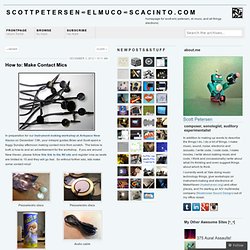 The below is both a how-to and an advertisement for the workshop. If you are around New Haven, please follow this link to the INI site and register now as seats are limited to 10 and they will go fast. So without further ado, lets make some contact mics! Tools: Top 5 Dubspot Ableton Live Video Tutorials of 2011. Ableton Live continues to gain popularity among producers for its flexibility with audio files, live performance capabilities, ease of use, and it’s groundbreaking approach to sound creation.

There’s not much that Ableton can’t do and we’re always looking for new approaches in how to use this powerful software. In 2011 Dubspot offered many tutorials on Ableton Live from studio wizards such as Ableton Course Designer Professor Nalepa, Curriculum Developer Pat Cupo, Ableton instructor Mike Hatsis, Ableton online instructor Thavius Beck and techno legend John Selway. Check out our top 5 Ableton Live tutorials below and find some great new tricks for your music production toolbox.

Professor Nalepa: Vocal Effect Techniques (Radiohead, Nosaj Thing) Electronic Music Theory: 8 Rhythmic Devices You Should Know (Polyrhythm, Cross-rhythm, Syncopation +) In my previous post, I wrote about the primary elements of drum beats: measured time, drum sound selection, and the observable phenomenon of 2s and 3s. Truth be told I wrote that article to get you thinking about rhythm in a different way so I could follow it with this article. I will go over some rhythmic devices that I’ve picked up over the years from working with drummers and percussionists in a variety of live performance and studio recording situations.

Being that this is a series dedicated to how music works (music theory), it is appropriate to include some examples of recorded music that utilizes these techniques, which I will do for you below. Projects/Lab. Since its release in this website, Otomata, the generative musical toy has gained significant interest. Millions of people visited the site and played with it. I got so many mails, requests, thanks, and I’ve seen so much cool stuff people did with it and all makes me happy. Today Otomata got an update. You can play with the new version at the exact same URL (no worries, old pieces still work), go here: New version has an entirely new (and hopefully better) GUI, 40 cool sound scales to play with, settable tempo, and recording support (you can record your pieces as audio files from the online application and get them to your computer).