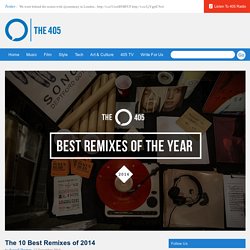 At the end of the day, what you listen to when you hear a remix is a re-imagining of an existing song. That's really all it is. How that remix takes shape, whether it almost follows the original beat-for-beat, or whether it utilises the vocals and changes everything else, or if it completely obliterates the original – it doesn't matter. EQ And Compression Techniques For Vocals, Acoustic Guitar. Vocal EQ I rarely, if ever, EQ my vocals on the way in. 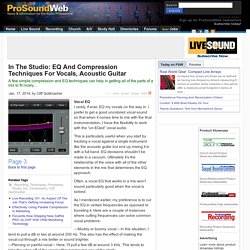 I prefer to get a good uncolored vocal sound so that when it comes time to mix with the final instrumentation, I have the flexibility to work with the “un-EQed” vocal audio. This is particularly useful when you start by tracking a vocal against a single instrument like the acoustic guitar but end up mixing it in with a full band. EQ decisions shouldn’t be made in a vacuum. Ultimately it’s the relationship of the voice with all of the other elements in the mix that determines the EQ approach. Often, a vocal EQ that works in a mix won’t sound particularly good when the vocal is soloed. As I mentioned earlier, my preference is to cut the EQ in certain frequencies as opposed to boosting it. 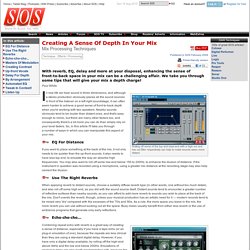 We take you through some tips that will give your mix a depth charge! Paul White Rolling off some of the top and bass end with a high-cut and low‑cut filter respectively can help to make sounds seem more distant. In real life we hear sound in three dimensions, and although a stereo production obviously places all the sound sources in front of the listener on a left‑right soundstage, it can often seem harder to achieve a good sense of front‑to‑back depth when you're working with two speakers.

Nearby sounds obviously tend to be louder than distant ones, and that's easy enough to mimic, but there are many other factors too, and consequently there's a lot more you can do than simply rely on your level faders. EQ For Distance Use The Right Reverbs Echo‑cho‑cho... Masters Of Modulation Creating Contrast. Thomas Gold's 10 vocal production tips. His vocal remix of Adele's Set Fire To The Rain has been smashing mainroom dancefloors all over the world and has already gained over 13 million plays on YouTube. 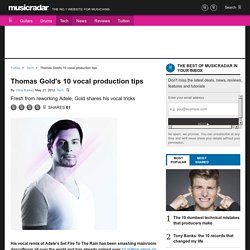 So, who better to give us some tips on treating vocals on club tracks than Thomas Gold? From effects to edits and EQ, check out his ten suggestions for getting that shining club vocal. 1. Make sure the vocal recordings you use are of very good quality! "The vocals should not be over-compressed or over-EQ'd. 2. "When you receive vocal stems for production or for remixing, try to get them without the usual effects such as delay, reverb etc, as this makes it easier to fit them into your own track and you are not tempo-dependent as you might be when there are delays on the stem. "Timestretching reverbs and delays does not always deliver good results and it just sounds better if these effects are applied at the final tempo. " 3. "Don't just use all the vocals you have. 4. 5. "It's always helpful to cut off low-end frequencies. 6. 7. 30 all-star production tips. Intro Whatever type of music you make, there's no better advice than the advice of a professional. 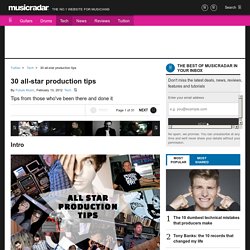 And if you read on, you'll find precisely that from everyone from Richie Hawtin and Gui Borrato to Martin Solveig and Aeroplane. We rounded up our famous friends and asked them each for a production tip; a segment of exclusive knowledge from them to you. So flick through our tips gallery and learn new techniques to help improve your music today! Next: Richie Hawtin Richie Hawtin “Everything shouldn’t be all digitally clear and tight. Sometimes it’s the bass, the strings or the 303s. Abel Ramos “I love big breakdowns and big effects when bringing the track back to the groove.

“Place a delay on a loop or rhythm track. “Now just adjust the volume of the track when raising the feedback. Steve Lawler “When writing and producing the first thing I do is build is the drums, starting with a nice kick or maybe two kicks EQ’d to sound right. Burns Dimitri From Paris Full Intention.