The Most Popular Keys of All Music on Spotify. Each day, approximately 20,000 new songs appear on Spotify, which now has over 30 million tracks, which is obviously a lot of music. 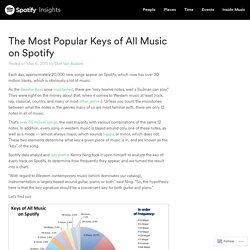 As the Beastie Boys once maintained, there are “only twelve notes, well a [hu]man can play.” They were right on the money about that, when it comes to Western music at least (rock, rap, classical, country, and many or most other genres). Unless you count the microtones between what the notes in the genres many of us are most familiar with, there are only 12 notes in all of music. That’s over 30 million songs, the vast majority with various combinations of the same 12 notes. In addition, every song in western music is based around only one of these notes, as well as a mode — almost always major, which sounds happy, or minor, which does not. Spotify data analyst and jazz pianist Kenny Ning took it upon himself to analyze the key of every track on Spotify, to determine how frequently they appear, and we turned the result into a chart.

Let’s find out: Like this: How to REALLY make DUBSTEP. The Fundamentals of Synthesizer Programming Pt. 1. Notion: A Look at the Music Notation Software for iPad. As you may recall, I reviewed Symphony Pro late last year and hailed it as a good start and the best we have available to us for notating music on the iPad. I believe that Notion may have just raised the bar.

I found that the actual act of notation on Notion was far more intuitive and a bit quicker than with other apps, which is fantastic. But one of the real joys of Notion is the playback. They’ve added real samples of instruments (no more midi!) The symphonic sounds are the actual London Symphony Orchestra, recorded at Abbey Road Studios in the UK, and they sound great. The only drawback is that not all instruments are included within the app, and additional instruments are available via in-app purchases. The app sports reverb and distortion effects too, plus a full audio mixer. In addition to notation, you can also create tab or offer up notation and tab (which is handy as an educator). Music can be imported via .notion files, MIDI, MusicXML or GuitarPro 3-5 files. Guides. This is a collection of articles I’ve written over the years, covering different aspects of writing and performing electronic music. 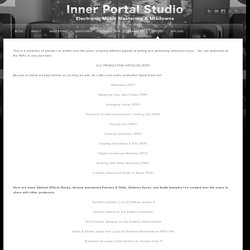 You can download all the PDFs in one shot here: Be sure to check out past articles on my blog as well, as I often post audio production topics there too! Mixdowns (PDF) Mastering Your Own Tracks (PDF) Arranging Songs (PDF) Production Basics 2: EDM Track Structure. How to use [Jamn] to play a cover song - Jamn iOS App. Figure for iPhone, iPad and iPod touch on the iTunes App Store. Tutorials. Ill.Methodology Workshop - Chapter 1. Passing Notes. Free software that simplifies songwriting - Hookpad. In addition to being a great songwriting tool, Hookpad is a powerful MIDI creation platform. 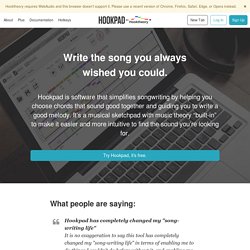 With a single click, Hookpad's arrangement can be exported to MIDI and into a Digital Audio Workstation (Ableton Live, FL Studio, Logic Pro, GarageBand, ...) for additional production / modification. With intelligent harmony / chord fills, and the ability to independently shift the tonal center of each track, incorporating Hookpad into your workflow will enhance your creativity and productivity as a songwriter or producer. Need a quick pad fill for C → G → am → F? Drop those chords into Hookpad, tweak the mix to your liking, send to MIDI, and in less than a minute, you are on to the next thing.

Start from a song you already love. The Theorytab database is a huge collection of real songs written out with Hookpad. If you want to learn more how chords and melody work, check out Hooktheory I, our interactive text for the Web and iPad that serves as a companion for Hookpad and the Theorytab database.