USSR Production. HOW TO: FED & Zorki Curtain tension. The curtains operate with their curtain ribbons overlapping and some shafts and drums loosely coupled. 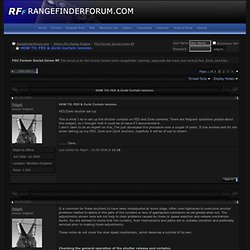 This tends to cause them to become synchronised to each other unless there is a large enough mismatch in spring tension. The different shutter speeds are obtained by setting different gaps between the curtains (done on the speed selector), which move at the same rate for every speed, therefore if one speed is correct, then the others will be too. {The exception to this is 25th (or 30th), the flash sync speed and all slower speeds. The first curtain has made it all the way across the frame before the second is released, so it is possible that their speeds are different, but not enough to effect the overall exposure} There are two elements to checking and adjusting the curtain spring tensions: Adjusting one or the other so they travel across the aperture with a constant gap, (synchronised) and: My screen was set to 60Hz for these tests, a lower rate would be even better. 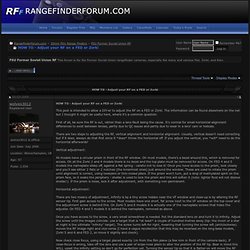 The information can be found elsewhere on the net but I thought it might be useful here, where it's a common question. First of all, be sure the RF is out, rather than a lens-fault being the cause. It's normal for small horizontal-alignment differences to exist between lenses, partly due to QC issues and partly due to wear in a lens' cam or helicals. There are two steps to adjusting the RF, vertical alignment and horizontal alignment. Usually, vertical doesn't need correcting but if it does, always do that first since it *does* throw the horizontal off. Vertical adjustment: All models have a circular prism in front of the RF window. Horizontal adjustment: There are two means of adjustment, infinity is by a tiny screw hidden near the VF window and close-up is by altering the RF sensor tip. » HOW NOT TO DESTROY YOUR FED AND ZORKI (A Basic Primer) ZorkiKat ЗоркиКат Фотографий. For newbies, applicable to most FED and Zorki cameras. 1. 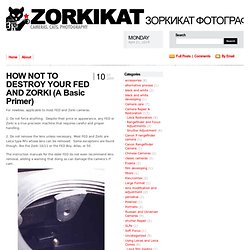 Do not force anything. Despite their price or appearance, any FED or Zorki is a true precision machine that requires careful and proper handling. English Manual for Repair Zorki FED Leica Camera. Kiev Survival Site. Curious oddly wrapped package (c.2003) Kiev 3, Junk or Project? 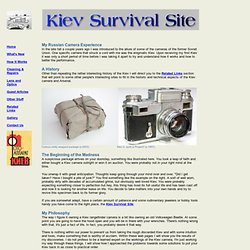 (c.1957) The Beginning of the Madness A suspicious package arrives on your doorstep, something like illustrated here. You took a leap of faith and either bought a Kiev camera outright or won it on auction. You were probably not in your right mind at the time. You unwrap it with great anticipation. If you are somewhat adept, have a certain amount of patience and some rudimentary jewelers or hobby tools handy you have come to the right place, the Kiev Survival Site.

My Philosophy The way I figure it owning a Kiev rangefinder camera is a bit like owning an old Volkswagen Beetle. There is nothing within our power to prevent us from taking the rough discarded Kiev and with some intuition and tools, make something that is worthy of acclaim. Note: most of these pages have many images, it may take some time to download the complete document. 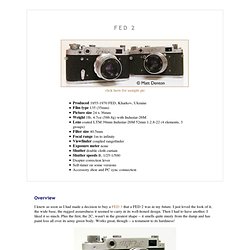 I just loved the look of it, the wide base, the rugged assuredness it seemed to carry in its well-honed design. Then I had to have another, I liked it so much. Plus the first, the 2C, wasn't in the greatest shape -- it smells quite musty from the damp and has paint loss all over its army green body. Works great, though -- a testament to its hardiness! It was obviously well-used by the Kazakstani who scratched his or her name (and country of origin) in the leather case once upon a time. Zorki Page. ZORKI 4 OWNERS MANUAL. With Notes on the Zorki 4K, Mir, and Zorki 5 and 6 All material copyright by Mark Tharp, 2000 Introduction: 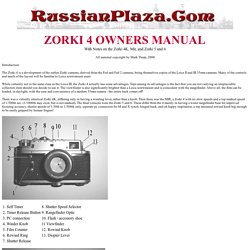 FED vs Zorki. 5] Pressure plates- FED deviated from the Leica in this regard. 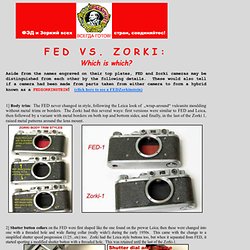 Up to the last of the FED-1, the pressure plates were circular in shape. The Zorki originally had these too, but with the 'separation' from FED, they redesigned the plate so that it became shaped like a rather fat 'band-aid' strip similar to the one found in the Leica. In fact, the Zorki pressure plates could interchange with the one found in the Leica. 6] Rangefinder coupler- FED had this as a little tear-drop shaped sensor for most of its run, used until some FED-2.

Some early FED used a rather fat, block shaped sensor. *found on all FED-1 as well, see top pictures.