Keys to Film Financing: Producing Within a Financial Framework. For our final article in the series, we'll discuss the changing realities of staying within a budget and the solutions we've found to be most effective on a variety of budgets. 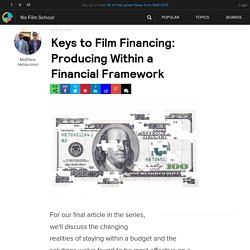 Having a successful production stems from exceptional preparation. Regardless of budget (whether it's a $200,000 film or a $200,000,000 film), a project relies on its key management team to successfully prepare for principle photography. As we’ve discussed in the financing series thus far -- each piece of the puzzle (the completed film) has an economic foundation at its core. Acolite.tv. How Aperture, Shutter Speed, and ISO Affect Pictures Shown in a Chart. Daredevil Fight Scene: How They Filmed That 6 Minute Sequence. One of our favorite moments from Daredevil is the climactic fight sequence which ends Episode 2. 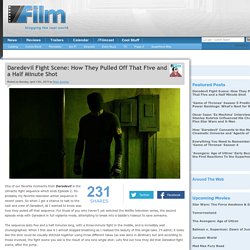 Its probably my favorite television action sequence in recent years. So when I got a chance to talk to the cast and crew of Daredevil, all I wanted to know was how they pulled off that sequence. For those of you who haven’t yet watched the Netflix television series, the second episode ends with Daredevil in full vigilante mode, attempting to break into a baddie’s hideout to save someone. World's Fastest Transcoding App, EditReady, Has a Host of New Features. Remember EditReady, Divergent Media's spectacularly fast transcoding app? 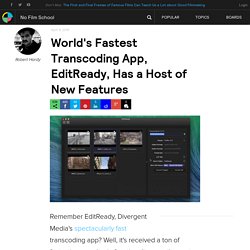 Well, it's received a ton of fantastic upgrades in functionality over the past two months. EditReady has actually had two fairly significant updates recently. 15 Tips on Becoming a Better Director. Many of the positions in film production are rather straightforward, but directing isn't one of them. 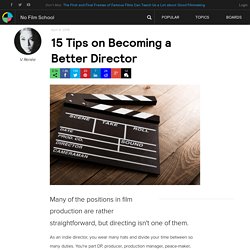 As an indie director, you wear many hats and divide your time between so many duties. You're part DP, producer, production manager, peace-maker, lunch decider, therapist, priest, and so much more. Is Your Footage Suffering from the Massive Difference in Export Quality Between FCPX & Premiere? A rational person might assume that the program from which you export your media wouldn't have a noticeable impact on the quality of the final image, especially if the export settings are identical in both programs. 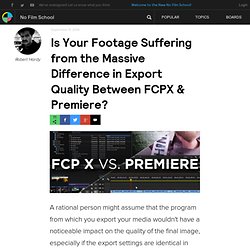 Confused About Codecs? This Video Tutorial Will Teach You What You Need to Know. Codecs are complicated. 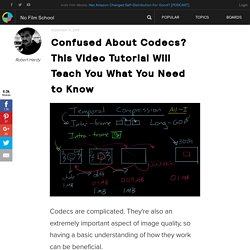 They're also an extremely important aspect of image quality, so having a basic understanding of how they work can be beneficial. Unfortunately, for young and old filmmakers alike, trying to unravel and decipher some of the engineering concepts behind how video encoding actually works can be a bit like trying to paint a barn with a toothbrush. Complex questions abound. Confused About Codecs? This Video Tutorial Will Teach You What You Need to Know.

Here's What You Need to Know About Video Compression. As filmmakers, most of us consider ourselves to be creative people. 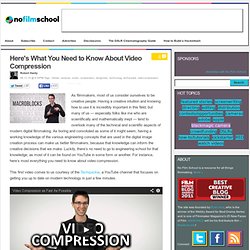 Having a creative intuition and knowing how to use it is incredibly important in this field, but many of us — especially folks like me who are scientifically and mathematically inept — tend to overlook many of the technical and scientific aspects of modern digital filmmaking. As boring and convoluted as some of it might seem, having a working knowledge of the various engineering concepts that are used in the digital image creation process can make us better filmmakers, because that knowledge can inform the creative decisions that we make. Here's What You Need to Know About Video Compression. How do you colour correct in Final Cut Pro X? This video from Terence Curran explaining the basics of colour correction got us thinking. 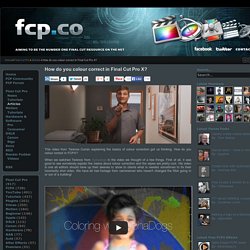 Watch the Online Video Course Migrating from Final Cut Pro 7 to Final Cut Pro X. The Top Ten Editors concerns about Final Cut Pro X. Aesthetics Masterclass: Learn How to Speak the Cinematic Language More Fluently. If you're going to work in a visual medium, you have to understand the visual language. 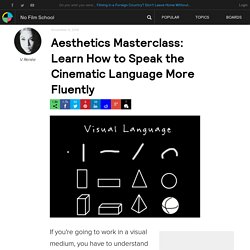 Everything that is inside a composition, as well as the characteristics of those things, say something to its viewer. Literally -- everything. The shot size, camera angle, lens used, lighting, costuming, and props say something. The size, shape, and color of objects in the frame say something, as well as the vectors they create. Their relationship to other objects in the frame say something, too. As a filmmaker, your job is to tell stories using these images -- these "words", which is why your visual literacy is supremely important if you want to 1.) communicate clearly and effectively with your audience, and 2.) tell the stories that you truly want to tell.

Watch One of the Clearest, Most Helpful Explanations of Story Structure Ever. There are countless voices out there explaining various methods for unpacking your narrative. 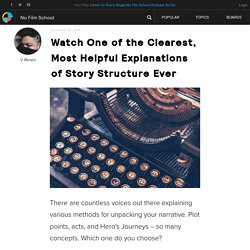 Plot points, acts, and Hero's Journeys -- so many concepts. Which one do you choose? That's actually a bit of a trick question, because there's no one structural paradigm that wins out over the others. When it comes to screenwriting, rules and rigidity don't really translate well -- I suppose not even when it comes to structure. However, unless you're working on an avant-garde or experimental piece of cinema, having a clear structure is ideal in order to help your audience understand what's going on in your story. Composition & Color Analysis of Blade Runner (1982) A breakdown of the visual language of "Blade Runner" - Directed by Ridley Scott / Cinematography by Jordan Cronenweth.

Photokina report day 1 - the Samsung NX1 (4K mirrorless camera with H.265) - EOSHD. Of all the surprises recently and there have been a few, the Samsung NX1 is the biggest. I spoke to the very knowledgable Sung Lae Park of Samsung to find out the finer details and tried the pre-production camera. Samsung had 4K DCI footage from the NX1 playing on an enormous 4K array of screens at their stand and at a rough count an enormous number of demo units, more than 20. Zero Budget Software Suite For Filmmakers. Money is, by definition, always a difficult issue for the low budget filmmaker. The challenge is in getting as much of your meagre budget up on the screen as possible. With that being the case do you really have the money to throw around on overpriced software packages? Luckily, by the wonders of open source development, just about every £500 software package has its freebie equivalent. These packages give you an entire office set up for every stage of the filmmaking process, from drawing up budgets and schedules, writing your script right through to advanced editing and special effects.

All for a most reasonable price. The Office Open Office – Equivalent to Microsoft Office MAC/PC/LINUX Word and Excel, absolutely essential in running your office but at an annoyingly high price. Celtx – Equivalent to Final Draft. Apertus Axiom Beta: World's First 4K Open Source Cinema Camera is Now Crowdfunding. For the past few years, we've been covering the intriguing work of Apertus, a group of volunteers dedicated to creating the world's first open source digital cinema camera.

Although there were times where it felt like the Apertus Axiom cameras would never see the light of day, the company today started a crowdfunding campaign in which backers can purchase the Axiom Beta camera at cost. Not only is the concept bordering on revolutionary, but this might just be the most affordable 4K digital cinema camera yet. This Clickable Periodic Table of Tropes is the Holy Grail of Storytelling Resources.

Attention everyone: We have found it. We have found the Holy Grail of online screenwriting/storytelling resources. Independent film distribution tips: a guide for indie filmmakers.