Exploration of the elements of dance 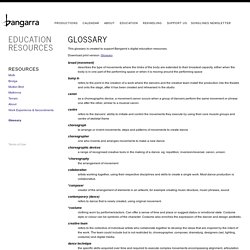 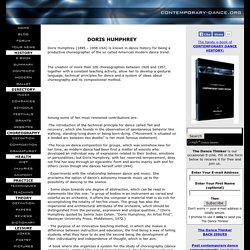 The creation of more than 100 choreographies between 1920 and 1957, together with a constant teaching activity, allow her to develop a gestural language, technical principles for dance and a system of ideas about choreography and its compositional method. How lighting design and technology are transforming dance on stage. Basic principles lighting. Australian Dance Theatre. Photo - Chris Herzfeld The Australian Dance Theatre is renowned for its cutting edge explorations into the borders of contemporary dance and their new show, Be Your Self, is no exception. 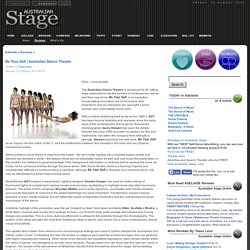 Incorporating innovative use of movement, text, projections and an interactive set, last night’s world premier was undoubtedly world class. Contemporary dance in Australia. Contemporary dance uses the body's natural lines and energy to create new movements which have a greater range and fluidity than conventional dance. 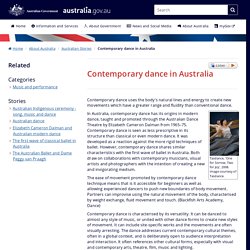 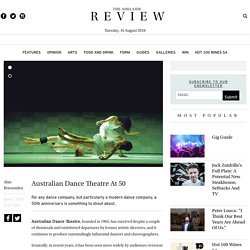 Australian Dance Theatre, founded in 1965, has survived despite a couple of dismissals and embittered departures by former artistic directors, and it continues to produce outstandingly influential dancers and choreographers. Ironically, in recent years, it has been seen more widely by audiences overseas than in Australia. Under Garry Stewart, the company’s longest serving artistic director, it has become the nation’s most travelled dance troupe. This year ADT has already been to France and Spain, will soon be in France again, and will tour half-a-dozen Australian towns and cities in July and August. Touring was not on the agenda when Elizabeth Dalman teamed up with former Royal Ballet dancer Leslie White to found ADT in 1965. The 60s were turbulent, exciting times. Shattered, Dalman spent a decade in Italy, rearing her son, teaching, performing, founding a youth dance group. V&A · Collections. COSTUME DESIGN - Ensemble Theatre Sydney.

About Costume Design - ArtsAlive.ca – The Secret Life of Costumes. This article was adapted by Janet Irwin and Judith Bowden from the original entitled “From Page to Stage – The Costuming Process in the Theatre” by Jennifer Smith-Windsor, appearing in Fiberarts Magazine , March/April, 1996. 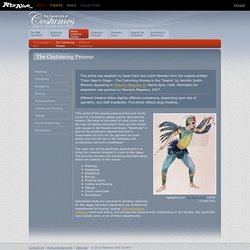 Permission for adaptation was granted by Fiberarts Magazine, 2007. Different theatres follow slightly different procedures, depending upon size of operation, and staff availability. This article reflects large theatres. About Costume Design - ArtsAlive.ca – The Secret Life of Costumes. Canadian designer Judith Bowden talks about the role of the costume designer and how she approaches her work. 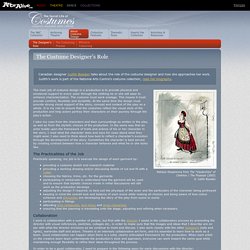 Judith’s work is part of the National Arts Centre’s costume collection; read her biography. Natalya Stepanovna from The “Vaudevilles” of Chekhov / The Proposal (2003) © Judith Bowden The main job of costume design in a production is to provide physical and emotional support to every actor through the clothing he or she will wear to enhance characterization. The costume must work onstage. This means it must provide comfort, flexibility and durability. Australian Dance Theatre. Dion%20sound. Movies and Film: A Brief History of Sound in Movies. We all know that first there was silent film and then there was sound. 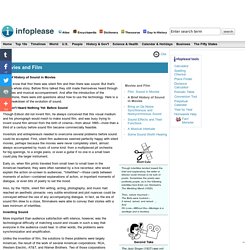 But that's not the whole story. Before films talked they still made themselves heard through intertitles and musical accompaniment. And after the introduction of the microphone, there were still questions about how to use the technology. Here is a brief breakdown of the evolution of sound. You Ain't Heard Nothing Yet: Before Sound Short Cuts. Introduction to Film Sound. Though we might think of film as an essentially visual experience, we really cannot afford to underestimate the importance of film sound. 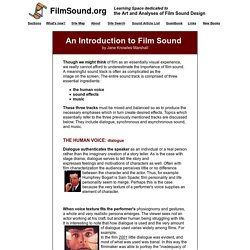 A meaningful sound track is often as complicated as the image on the screen. The entire sound track is comprised of three essential ingredients: the human voice sound effects music These three tracks must be mixed and balanced so as to produce the necessary emphases which in turn create desired effects. Topics which essentially refer to the three previously mentioned tracks are discussed below. They include dialogue, synchronous and asynchronous sound, and music. THE HUMAN VOICE: dialogue. Raindance Main Home Page. What is jazz dance in Australia - Dance Informa magazine. Share Tweet Email We can all remember jazz ballet, jazz hands, lycra, sequins, lace-up jazz shoes and Flashdance, but what is jazz dance now and how has it evolved? 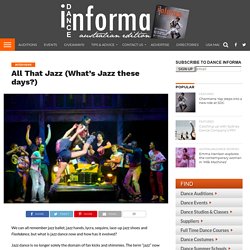 Jazz dance is no longer solely the domain of fan kicks and shimmies. The term “jazz” now incorporates a broad range of dance styles. Use of props / Discovering Dance – Teachers' Notes / Key collection / Reviewed resources / Dance / Secondary teaching resources / Teaching and Learning / Home - Arts Online. Back to the 'Jump link' navigation, at the top of the page Background information Props are objects that dancers manipulate or use to enhance their dance. Dancers from all different cultures use props in many ways. Often dancers hold props like poi, ribbons, swords, or fans. Props may be manipulated for many reasons (for example, to exaggerate gestures, to create rhythms, to convey ideas or feelings). Dancers may also wear a prop: 6661 14389 2 PB. Safe spaces for dance » Ausdance. Dance lessons and performances happen in different locations, both inside and outside. For safety and insurance purposes, follow these safety suggestions.

Studios should be bright and well-lit with natural and artificial light. Recommended temperatures should be maintained at approximately 21°C with a minimum of 20°C and maximum 26°C. Relative humidity will also influence the effects of high temperature. Between six to ten changes of air per hour are needed when spaces are used intensively. A minimum space of 6 square metres per student with an ideal of 9 square metres 1 . Dance - Components of the dance. Physical requirements Dancers are not just performing artists; their bodies are also the instruments through which the art is created. The quality of this art, therefore, necessarily depends on the physical qualities and skills that dancers possess.

The stronger and more flexible a dancer’s body, the more capable it is of a wide range of movement. Nearly all professional dancers start training at a young age in order to shape and develop their bodies correctly. HuffPost is now a part of Oath. Costumes and makeup activites guide. Matthew Bourne - Associate Artist - Sadler's Wells Theatre. Matthew Bourne is widely hailed as one of the UK's most popular and successful Choreographer/Directors. He is the creator of the world's longest running ballet production, a five-time Olivier Award-winner, and the only British director to have won a Tony Award for both Best Choreographer and Best Director of a Musical. Bourne started training to be a dancer at the comparatively late age of 22. Matthew Bourne: A showman from his head to his toes.