Easy light setup to improve your films. The Sony a7 Series: Which Model Suits You Best? This series of night exposures was captured in an attempt to test the ISO performance of each of Sony’s three distinct a7-series cameras. 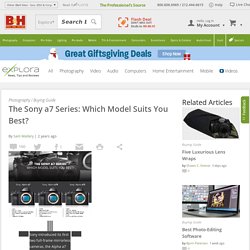 Each camera was attached to the Sony FE 70-200mm f/4.0 G OSS lens and mounted atop a tripod via the lens’s tripod collar. Each camera was set to Aperture Priority mode and the lens was set to f/11. A photograph was made at each full-stop ISO setting on each camera. This adjustment of the ISO inherently affected the shutter speed, which is apparent in the varying movement of New York's East River at the bottom of each frame. Due to the complexity of lighting in this scene, and in an attempt to keep the highlights from being overexposed, the exposure compensation dial was set to -0.7 on each camera for every shot in the series. The images you are seeing are RAW files, and were processed with Lightroom at a White Balance setting of 4500K.

We think the results are very interesting, but we will let you decide which camera is right for your needs. The Dangers of Photography Addiction. Philip Bloom a7S Seminar. DMX LIGHTING FOR BEGINNERS - PART #1. SONY a7S MOONLIGHT iso test. Leprecon Lighting Board Tutorial. 7 Things You Need To Know When Upgrading to the Blackmagic Pocket Cinema Camera from a DSLR.

There’s no question about it, the Blackmagic Pocket Cinema Camera is one of the hottest cameras out there. 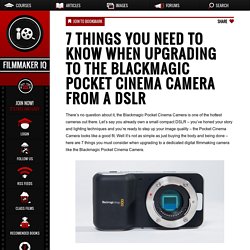 Let’s say you already own a small compact DSLR – you’ve honed your story and lighting techniques and you’re ready to step up your image quality – the Pocket Cinema Camera looks like a good fit. Well it’s not as simple as just buying the body and being done – here are 7 things you must consider when upgrading to a dedicated digital filmmaking camera like the Blackmagic Pocket Cinema Camera. 1. The Image Quality is Fantastic Lets just start off by saying that yes indeed, the quality of the video coming off the Blackmagic Pocket Cinema Camera is quite fantastic. I got to spend some time with an evaluation camera provided by our sponsor Blackmagic Design. I asked Victoria Patton to accompany me on a short impromptu test – shooting a melancholy stroll through San Diego’s Gas Lamp District . 2. The 4 Best Lenses for Shooting Wedding Videos. Top image via Shutterstock When shooting a wedding, you will want a few different lenses to work with. 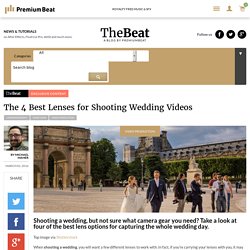 In fact, if you’re carrying your lenses with you, it may be best to swap lenses during the day. Lenses that work great for ceremonies may not work at all during the reception. During the wedding day, you will want to get plenty of intricate details. This includes big things like exteriors of the hotel, church, or venue, down to little things like rings and cufflinks. 35mm Image via The Digital Picture The 35mm is a wide-angle lens that’s perfect for shooting the entire wedding day. During the ceremony, this lens is great at setting a feel for the vows. Here’s a comparison between the Canon 35mm, Zeiss 35mm, Cooke 40mm, and the new XEEN 35mm from cinematographer Shane Hurlbut, ASC. 50mm Image via The Digital Picture. Producing: Location Release Form [Download] - Indie Tips. How To Shoot B-Roll - Transom.org.

CAMERAS-Basics//how to. EQUIPMENT. LIGHTING-How to. Steadicam//Glidecam//etc-How to. BTS. RENTALS. Top 10 YouTube Channels for Indie Filmmakers. How to learn filmmaking without spending time and money? 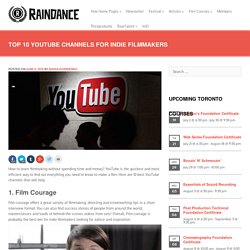 YouTube is the quickest and most efficient way to find out everything you need to know to make a film. Here are 10 best YouTube channels that will help. 1. Film Courage Film courage offers a great variety of filmmaking, directing and screenwriting tips in a short interview format. 2. Everything an indie filmmaker could possibly want to find on a YouTube channel: loads of tutorials, helpful tips, short films with detailed behind-the-scenes and video production reports. 3.

Yes, Raindance is on the list and for a reason! Subscribe to the Raindance Youtube Channel here: 4. Visual effects tutorials for independent filmmaking, what's more to say? 5. This channel is a perfect find for low-budget filmmaking. 6. DIY filmmaking tips, filming equipment reviews and general advice on production. Independent Filmmaker's Toolkit.

Want to make a movie and want to know how to start? 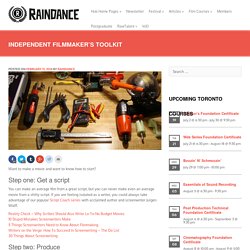 Step one: Get a script You can make an average film from a great script, but you can never make even an average movie from a shitty script. If you are feeling isolated as a writer, you could always take advantage of our popular Script Coach series with acclaimed author and screenwriter Jurgen Wolff. Reality Check – Why Scribes Should Also Write Lo-To-No Budget Movies10 Stupid Mistakes Screenwriters Make 5 Things Screenwriters Need to Know About Filmmaking Writers on the Verge: How To Succeed In Screenwriting – The Do List30 Things About Screenwriting Step two: Produce Next you need some money, but if you follow the principals of Lo-To-No Budget Filmmaking, you won't need as much as you might have thought.

You will also need to Create A Business Plan, and get your Basic Legal Contracts and your Budget and Schedule together. 12 Tips for Indie Producers from M. Step three: Direct.