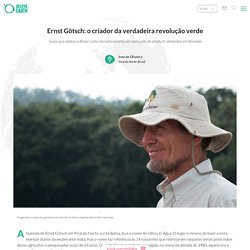 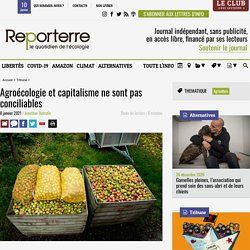 The Amazon is a Man-Made Food Forest, Researchers Discover. Most of the edible plants in the rainforest were planted by humans over 4500 years ago, new study finds. 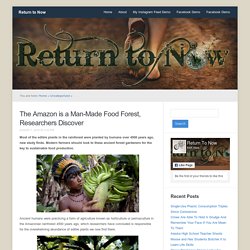 Modern farmers should look to these ancient forest gardeners for the key to sustainable food production. Ancient humans were practicing a form of agriculture known as horticulture or permaculture in the Amazonian rainforest 4500 years ago, which researchers have concluded is responsible for the overwhelming abundance of edible plants we now find there. The dense abundance of fruit trees in the rainforest didn’t plant themselves, humans spread them. Nearly 40% of Russia's Food Still Comes From Small, Family Gardens. Almost half of Russia’s food is grown in backyard gardens! 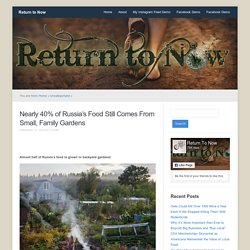 While most of the world is completely dependent on industrial agriculture, the Russian people feed themselves. As recently as 2011, a full 40% of the food produced in Russia came from small, household gardens called dachas. Land Required for Animal Based Diet vs Plant Based Diet - Earthly Mission. Nearly 40% of Russia's Food Still Comes From Small, Family Gardens. (3) Facebook. A message from Dr Vandana Shiva for the New Year 2020. The fertility loop: a naive introduction to Regenerative Agriculture. Solar Panel Farm Grows 17,000 Tons of Food Without Soil, Pesticides, Fossil Fuels or Groundwater.

The newest agriculture technique might be the solution for the food –a growing problem that arises in locations that do not support tradition agriculture. 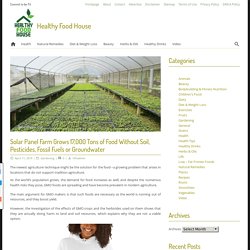 As the world’s population grows, the demand for food increases as well, and despite the numerous health risks they pose, GMO foods are spreading and have become prevalent in modern agriculture. The main argument for GMO makers is that such foods are necessary as the world is running out of resources, and they boost yield. Affärskartor. This is how eating locally grown produce can create a sustainable version of agriculture.

Food and Agriculture Organization of the United Nations. How Peru’s potato museum could stave off world food crisis. With a climate changing faster than most crops can adapt and food security under threat around the world, scientists have found hope in a living museum dedicated to a staple eaten by millions daily: the humble potato. 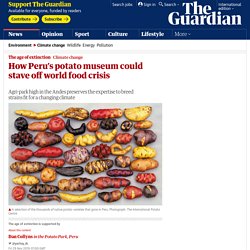 High in the Peruvian Andes, agronomists are looking to the ancestral knowledge of farmers to identify genetic strains which could help the tubers survive increasingly frequent and intense droughts, floods and frosts.

How to grow four tons of food a year in a metal box without sunlight. Jaime Silverstein works on a farm every day. 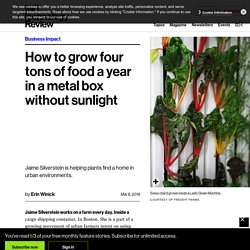 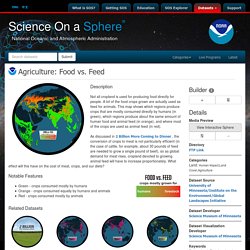 A lot of the food crops grown are actually used as feed for animals. This map shows which regions produce crops that are mostly consumed directly by humans (in green), which regions produce about the same amount of human food and animal feed (in orange), and where most of the crops are used as animal feed (in red). As discussed in 2 Billion More Coming to Dinner , the conversion of crops to meat is not particularly efficient (in the case of cattle, for example, about 30 pounds of feed are needed to grow a single pound of beef), so as global demand for meat rises, cropland devoted to growing animal feed will have to increase proportionately.

Case Studies - RetroSuburbia. This page provides a selection of case studies showing how real people are making positive changes in suburbia by retrofitting their homes, gardens and habits. 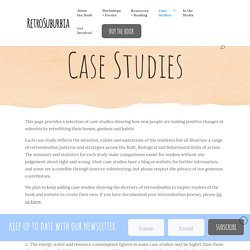 Each case study reflects the situation, values and aspirations of the residents but all illustrate a range of retrosuburban patterns and strategies across the Built, Biological and Behavioural fields of action. The summary and statistics for each study make comparisons easier for readers without any judgement about right and wrong. Most case studies have a blog or website for further information, and some are accessible through tours or volunteering, but please respect the privacy of our generous contributors. The suburbs are the spiritual home of overconsumption. But they also hold the key to a better future. Suburban affluence is the defining image of the good life under capitalism, commonly held up as a model to which all humanity should aspire. 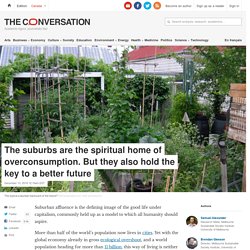 More than half of the world’s population now lives in cities. Yet with the global economy already in gross ecological overshoot, and a world population heading for more than 11 billion, this way of living is neither fair nor sustainable. To live within our environmental means, the richest nations will need to embrace a planned process of economic “degrowth”. Marie-Monique Robin 'The Crops of the Future' Marie-Monique Robin 'The Crops of the Future' "If we ban pesticides, we will no longer be able to feed the world". That is what the big industries always say in the media.

“Without pesticides the yield would decrease by 50% and food prices would increase by 40%". (6) 30 Documentaries about food, farming, agriculture, GMOs, water, the tar sands, etc. Plony przyszłości Lektor PL 720p. Save and grow: 1. The challenge. To feed a growing world population, we have no option but to intensify crop production. But farmers face unprecedented constraints. In order to grow, agriculture must learn to save. Både ris og ros til ny emballagefri butik. How drones can help manage the world's food supply. Drones are more than just cool-looking flying objects. Their real value lies in their ability to quickly and efficiently gather and analyze information on assets, geography, infrastructure, environmental trends and other important data that can be used to drive actional business insights.

So we have to ask: what could be more critical than information on the world’s food supply? Duckweed—tiny plants with huge potential. Wolffia globosa, a tiny, rootless duckweed, or water lens, apparently has what it takes to achieve great things. Researchers at the University of Jena (Germany), together with colleagues in India and Germany, have investigated the potential of various duckweeds as a human food source. The results, which are very promising, have been published under the title 'Nutritional value of duckweeds (Lemnaceae) as human food' in the leading journal Food Chemistry. Mer socialt hållbara och miljövänliga perspektiv börjar ta plats i jordbruket.

If You Want to Save the World, Veganism Isn’t the Answer. ‘Calls for us all to switch entirely to plant-based foods ignore one of the most powerful tools we have to mitigate against these ills – grazing and browsing animals.’ Illustration: Matt Kenyon Veganism has rocketed in the UK over the past couple of years – from an estimated half a million people in 2016 to more than 3.5 million – 5% of our population – today.

Russian Dacha Gardening - Homescale Agriculture Feeds Everyone. ‘UN Report Says Small-Scale Organic Farming Only Way To Feed The World’ Food Is Free On Over Grow The System. Aquaponics is the ancient type of farming that has resulted to be very effective. - Living Outdoor. Meet the woman leading China's new organic farming army. Security Check Required. Someone Give This Man A Nobel Prize Already. He’s Going To Save The Planet! Carbon Farming Gets A Nod At Paris Climate Conference. Ethan Roland - Carbon Farming.