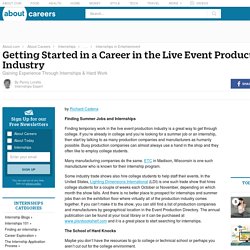 If you’re already in college and you’re looking for a summer job or an internship, then start by talking to as many production companies and manufacturers as humanly possible. Busy production companies can almost always use a hand in the shop and they often like to employ college students. Many manufacturing companies do the same. Some industry trade shows also hire college students to help staff their events. The School of Hard Knocks Maybe you don’t have the resources to go to college or technical school or perhaps you aren’t cut out for the college environment.

That doesn’t preclude you from working in the industry. One way to break into the industry is to start at the bottom, coiling cables in a production company, and work your way up. Open Door, Insert Foot Think Globally, Work Locally Continued... Where to Study Show Production. Are you an international student wondering where to study show production? 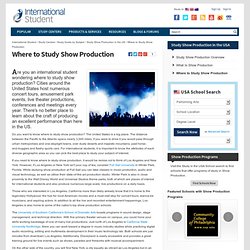 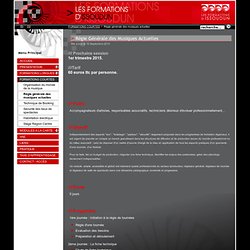 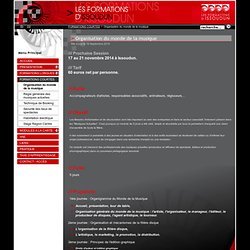 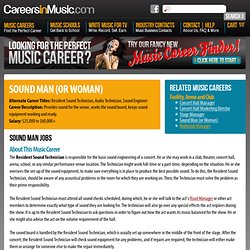 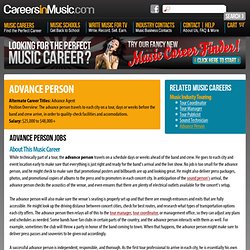 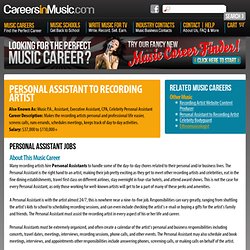 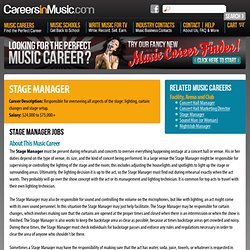 Salary: $24,000 to $75,000+ Stage Manager Jobs About This Music Career. The Boiler Room New York City.com : Profile. The Boiler Room is as far removed thematically as it is geographically from the Hell's Kitchen and Chelsea gay scenes—what New York lovingly calls a "post-gay gay bar"—where orientation isn't a good enough basis for conversation and being the most ov... more. 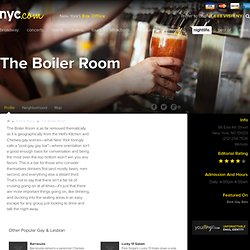 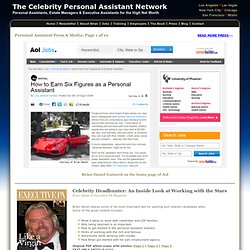 Partir étudier ou travailler à l’étranger. Où trouver des offres d'emploi - Conseils pour trouver un emploi. Crewspace - pro road crew network and jobs board. Search Music Careers. Stage Manager - Music Career. How To Work On The Road As Part Of The Crew, Touring With Bands (Short Version) — Andy Reynolds's Live Music Business. This article is adapted from my book, Roadie,Inc. Second Edition: How to Gain and Keep a Career in the Live Music Business . It is the short version of how to become a roadie; obviously the book contains a lot more information. However, if you are curious and really want to read the book right now, it is available on Kindle and can be downloaded here . New England Conservatory. Wearethekidsblog.com. 5 Ways to Intern Like a Rock Star. Touring With the Band - Music Industry Gigs and What They Pay. Elvis Week runs August 10-16, when fans from around the world gather in Memphis, Tenn. to celebrate the King of Rock 'n' Roll.

What would it be like to tour with the King today? It is tough to say but you'd have to imagine it would be lavish and maybe not as wild as his earlier days. The King would be 76 years old. 12 Tips to Land the Perfect Internship. Finding an internship in the music and entertainment industries can be a daunting task, especially if you want to work in music but you’re not sure what exactly you want to be doing. We’ve compiled some pointers from those who have landed and kept successful internships to help you in your search. 1. Most music companies want and look for interns. Institute of Audio Research NYC. Located in New York City’s historic Greenwich Village, IAR puts students in the heart of the action, allowing them to take advantage of a classroom that extends way beyond its walls and into every corner of this diverse, exciting and engaging city.

Anything that an aspiring audio engineer might need for work or play can be found nearby, including recording studios, theaters and some of the best nightlife in New York. The Village has long been the creative center for artists and intellectuals, and that tradition continues to this day with a new generation of students and thinkers who come from around the world to share ideas, create art and study at many of the outstanding colleges and universities nearby. World class cuisine, shopping, libraries, museums and recreation can all be found within blocks of the school, and for students looking to explore other areas of New York, IAR is within walking distance of every major line of public transportation in the Big Apple.

Touring With the Band - Music Industry Gigs and What They Pay. Stage Manager Duties for Concerts. Job opening: Concert Operations Stage Manager at Berklee College of Music. How to Be a Stage Manager: 11 Steps. Edit Article Edited by Jackaayy, Teresa, Tehol, BR and 8 others Being a part of a live performing art production can be very exciting, and very fulfilling, especially if you play such a major role. Being a stage manager is being the central brain of any sort of production, whether it be a musical or a small choir concert at your high school. More so, it can look amazing on a resume for future jobs! Ad. Advice for stage managing a concert? - SMNetwork.org. Hi, Outdoor concerts can be challenging to say the least. In order to do a multiband concert successfully, you should have stage plots of every band, as soon as humanly possible.

I'm doing a concert this weekend, and I've had my plots for 2 weeks. First determine how many change outs you need to do. Then schedule how much time to allow between acts for the change over. Where ever possible, pre-stage the equipment to the rear of the stagew. Try to establish a flow, so that the equipment comes up on stage from one side, and goes down the other, That makes movement easier for everybody. I f you are working with a rented sound system, that's the soundman's job. If you are working with a rented backline, they will set everything up.