WITH THANKS TO CATERINA T FOR BOOSTING UP THIS SECTION

Erik Meijaard: Indonesia's Fire Crisis — The Biggest Environmental Crime of the 21st Century. Large parts of Indonesia have now been in a state of emergency for over a month. 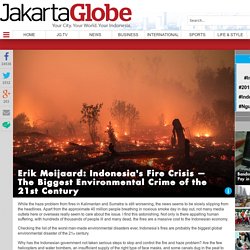 Why has there not been a nationally declared total fire ban advertised 24/7 on all television channels? Why has there not been a clear message: you burn — you go to jail? Why has Indonesia not sent in a million soldiers to address the humanitarian and environmental crisis? Why is all government action so apparently lackluster and unfocused? I think ultimately the answer is that the government still hasn’t recognized how serious the problem is. $50 billion or more? But serious it is, very serious! I am not sure how the above estimate was made. I also don’t know whether these figures take the many intangible impacts of fire into consideration, like haze-related traffic accidents, canceled flights, or businesses that cannot operate? Slamet from Palangkaraya, Central Kalimantan, works in construction but because of the haze that is consuming his province there is no work for him.

International reputation. Indonesia is burning. So why is the world looking away? I’ve often wondered how the media would respond when eco-apocalypse struck. 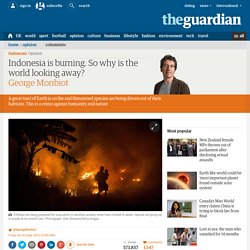 I pictured the news programmes producing brief, sensational reports, while failing to explain why it was happening or how it might be stopped. Then they would ask their financial correspondents how the disaster affected share prices, before turning to the sport. As you can probably tell, I don’t have an ocean of faith in the industry for which I work. What I did not expect was that they would ignore it. A great tract of Earth is on fire. And the media? What I’m discussing is a barbecue on a different scale. But that doesn’t really capture it. One of the burning provinces is West Papua, a nation that has been illegally occupied by Indonesia since 1963. Nor do the greenhouse gas emissions capture the impact on the people of these lands. It’s not just the trees that are burning. Why is this happening? The president, Joko Widodo, is – or wants to be – a democrat. Protect Paradise: An Animation about Palm Oil. Save Endangered Species.

5 Innocent Animals Suffering at the Hands of the Palm Oil Industry. When pondering the harmful effects the palm oil industry has on the planet, it’s easy to initially think only about the damage done to the land and environment. 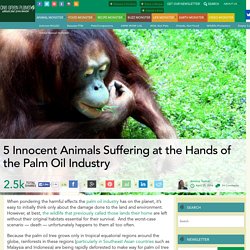 However, at best, the wildlife that previously called those lands their home are left without their original habitats essential for their survival. And the worst-case scenario — death — unfortunately happens to them all too often. Because the palm oil tree grows only in tropical equatorial regions around the globe, rainforests in these regions (particularly in Southeast Asian countries such as Malaysia and Indonesia) are being rapidly deforested to make way for palm oil tree plantations. Of course, all living creatures that reside in this diverse ecosystem are negatively impacted by the loss of their habitats, but several threatened or endangered species are facing extinction due to this industry. 1.

Roger smith / Flickr With less natural habitat for them to roam, contact with humans is inevitable. 2. Drriss & Marrionn / Flickr 3. Deforestation, Human Rights Abuse, Animal Extinction and the One Industry That Unites Them All. Palm oil is a vegetable oil taken from the palm fruit grown on oil palm trees. 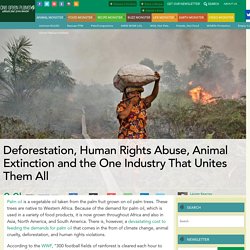 These trees are native to Western Africa. Because of the demand for palm oil, which is used in a variety of food products, it is now grown throughout Africa and also in Asia, North America, and South America. There is, however, a devastating cost to feeding the demands for palm oil that comes in the from of climate change, animal cruelty, deforestation, and human rights violations. According to the WWF, “300 football fields of rainforest is cleared each hour to make way for palm oil production.” This sort of large-scale habitat destruction does not come without a cost. Deforestation and Climate Change Indonesia, where the majority of palm oil is grown, currently has the world’s highest rate of deforestation. Rainforests are essentially the lungs of our planet, and when they are destroyed we all suffer.