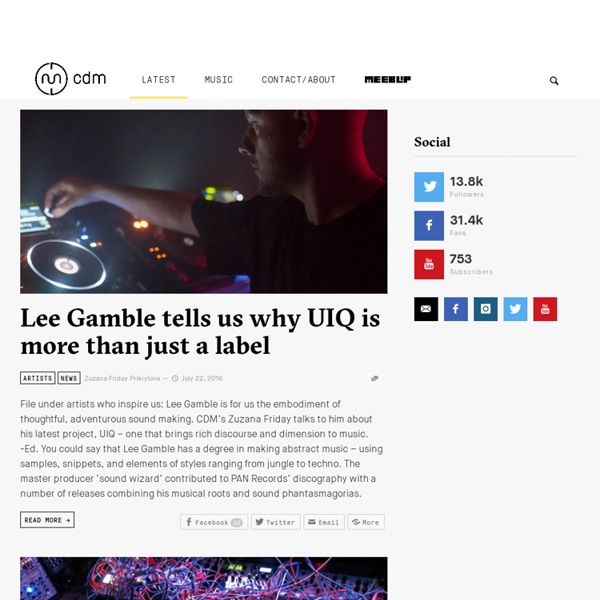 This wouldn’t normally be news, but for whatever reason, the Roland AIRAs went flying off the shelves – missing any MIDI documentation. Ahem. We covered a number of these details before, including a Max for Live patch for the convenience of those of you integrating with Ableton. The good news: the hackers were right, and got more or less the entire implementation via trial and error. So, this is still a good resource: AIRA Secrets: Here’s How to Take Command of Roland’s TB-3 and TR-8 with MIDI

Tutorials - Studio One Get tactile control. The StudioLive CS18AI is the first surface designed by PreSonus to control Studio One. Connected with a single Ethernet cable, you get 18 touch-sensitive moving faders, dedicated Fat Channel controls, markers, transport, scribble strips, filter DCA mix layers, and more. Mixtape Alpha A re-release of our pocket-sized 8-bit synth, complete with four voices, four effects, five-note polyphony, record, playback, and more! As Featured On Mixtape Alpha was a successful experiment for us, so much so, we ran out of our first production run.

How to construct chords - Piano Clues: Free tips and lessons for playing piano, organ and electronic keyboard You don’t need a “1000 Chords Dictionary” to be able to read and play chords. You can learn how to form chords on your own, because chords are built using simple formulas. A chord is three or more notes played at the same time. It’s as simple as that. Of course, the trick is to know which three notes… Progressive rock Progressive rock, also known as prog rock or prog, is a rock music subgenre that originated in the United Kingdom, with further developments in Germany, Italy, and France, throughout the mid-to-late 1960s and 1970s. It developed from psychedelic pop (rather than psychedelic rock, as is often stated). and originated, similarly to art rock, as an attempt to give greater artistic weight and credibility to rock music. Bands abandoned the short pop single in favor of instrumentation and compositional techniques more frequently associated with jazz or classical music in an effort to give rock music the same level of musical sophistication and critical respect.[4] Songs were replaced by musical suites that often stretched to 20 or 40 minutes in length and contained symphonic influences, extended musical themes, philosophical lyrics and complex orchestrations.

How-To: Easily Remove the Vocals from Most Songs 2015 Shortcut: When I wrote this article Audacity didn’t have an automatic center-panned vocal canceling effect… but now it does, so rather than do the stereo-separate / invert-one-track / play-both-as-mono trick (and that’s pretty much all there is to it), you should be able to find the Vocal Remover option in the Effects menu – but it’s more fun / interesting and can give better results if you do it yourself! =D I found this trick the other day whilst stumbling the Interwebs and thought I’d do a quick-write up w/ pictures to make it as easy as possible… For this exercise we’re going to be using a piece of free audio software called Audacity, which you can get for Linux, Windows and Mac. Scales and emotions See also a post about making chords from scales. So maybe you want to write a song or an instrumental in a particular mood or style, and you’re feeling overwhelmed by all the scales. Here’s a handy guide to the commonly used scales in Western pop, rock, jazz, blues and so on. Click each image to play the scale right in your browser with the aQWERTYon. These scales have a major third (E in the key of C), which makes them feel happy or bright.

Electric guitar Invented in 1931, the electric guitar became a necessity as jazz musicians sought to amplify their sound in the big band format. During the 1950s and 1960s, the electric guitar became the most important instrument in pop music.[1] It has evolved into a stringed musical instrument that is capable of a multitude of sounds and styles. It served as a major component in the development of rock and roll and many other genres of music. History[edit] The "Frying Pan", 1932 The need for the amplified guitar became apparent during the big band era as orchestras increased in size, particularly when guitars had to compete with large brass sections.

Research Songsmith What is Songsmith? Songsmith generates musical accompaniment to match a singer’s voice. Just choose a musical style, sing into your PC’s microphone, and Songsmith will create backing music for you. Then share your songs with your friends and family, post your songs online, or create your own music videos. The video on this page demonstrates Songsmith at work in the classroom; in fact Songsmith is free for teachers to use in their classrooms.

33 Ways to Make More Time in Your Life For Music-Making 1. Disconnect. Power down your computer–or if you absolutely need the thing for some reason related to your practice and studies, sever it from the internet by disabling wireless. 2. Banish Television.

Music theory Music theory considers the practices and possibilities of music. It is generally derived from observation of how musicians and composers actually make music, but includes hypothetical speculation. Most commonly, the term describes the academic study and analysis of fundamental elements of music such as pitch, rhythm, harmony, and form, but also refers to descriptions, concepts, or beliefs related to music.

Take an MP3 File and Delete the Words to Create Karaoke Edit Article Remove Vocals YourselfFind Instrumental Versions Edited by Fadil Khan, Zack, Caligari_87, Jen and 46 others Do you need music for your Karaoke party, or just want to sing along to your favorite song without those pesky singers getting in your way?