Music Theory - LightNote. Understanding arpeggiators. Let's turn our attention to arpeggiators, looking at their key parameters and building an in-depth awareness of how they can be used in our tracks. 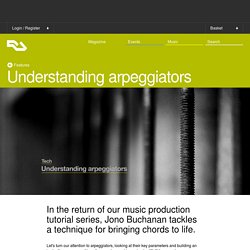 We'll focus on how an arpeggiated pattern can be used alongside other tools available in all DAWs to produce intricate, impressive results. Let's start by clarifying one thing. Whereas EQ, compression, reverb and delay effects etc., can be applied to audio and software instrument tracks alike, arpeggiators are designed only to be used with software instruments, MIDI keyboards and modules as MIDI effects. As they internally generate and process MIDI events, they won't work on audio tracks. Understanding reverb. Understanding compression. In this tutorial, we'll be looking at how to get started with compressors. 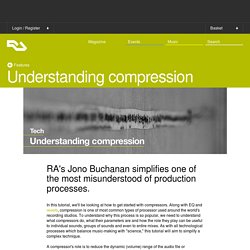 Along with EQ and reverb, compression is one of most common types of processor used around the world's recording studios. To understand why this process is so popular, we need to understand what compressors do, what their parameters are and how the role they play can be useful to individual sounds, groups of sounds and even to entire mixes. Understanding the low mid-range. If you're a music producer, feedback from clients, friends or other trusted ears is a hugely useful barometer of how close a mix is to being finished. 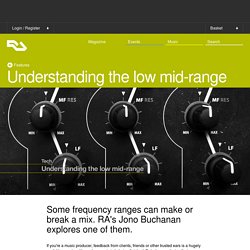 But when analyzing their (hopefully) constructive criticism, it's interesting to note how you put their words into action. If you're a graphic designer and you show a client some work, it's not hard for them to say "that blue could be darker," or "that font could be larger. " For producers, similar suggestions—"the mix could have more air," or "it could be crunchier"—are less tangible. Understanding mix space.

Listening to the work of producers and artists you admire can be a double-edged sword. 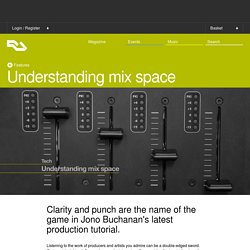 On one side, taking influence from such visionaries often provides the inspiration to write new tracks of our own. On the other, getting anywhere close to the same level of production and mix isn't easily done. In the struggle to match the power, drive and punch of such mixes, frustration can boil over to the point where new tracks are simply thrown into a mix without due consideration; extra effects are employed in the hopes of hitting upon something ear-catching; or output limiters are cranked up another few decibels in the belief that overwhelming volume alone will inject the adrenaline our own tracks seem to lack.

Through this tutorial, we'll explore a counter-approach that could produce better results. Often, less is more.

The Essential Guide To Levels. Whether you produce entirely in the box or use a wealth of outboard gear, understanding levels is a must. 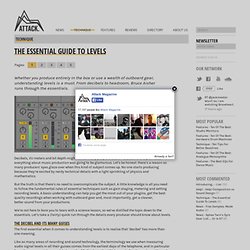 From decibels to headroom, Bruce Aisher runs through the essentials. Decibels, VU meters and bit depth might not be many people’s idea of fun, but no one promised everything about music production was going to be glamorous. Let’s be honest: there’s a reason so many producers’ eyes glaze over when this kind of subject comes up. No one starts producing because they’re excited by nerdy technical details with a light sprinkling of physics and mathematics. But the truth is that there’s no need to overcomplicate the subject. Video lessons.

Music hardware & instruments. Mixing & mastering. A guide to drum programming. In this feature we'll be looking at some tips to help you build and enhance the drum patterns you're programming for your tracks. 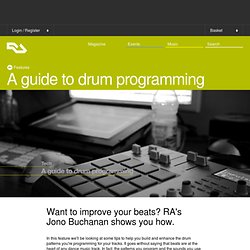 It goes without saying that beats are at the heart of any dance music track. In fact, the patterns you program and the sounds you use tell a listener as much about the musical style they're hearing as any other sound. In this feature we'll be looking at some tips to help you build and enhance the drum patterns you're programming for your tracks. We won't be focusing on tricks common to one genre, but will instead explore a range of things to try by building a basic pattern and slowly introducing more involved techniques. Most should prove useful, regardless of your musical preferences. Let's start with a simple pattern at 120 BPM. Basic beats: Here's an extremely basic pattern for a Battery 3 kit, featuring kick (on C1), snare (on D1) and hi-hats (on F#1). Developing pattern: So far, so straightforward. The Loudness Wars: Is Music's Noisy Arms Race Over? - Mike Barthel - Entertainment.

High-volume sound engineering may finally be falling out of fashion Flickr user Erica Cassella Sleigh Bells The loudest album of 2010 was almost certainly Sleigh Bells' acclaimed Treats, a collection of songs with the volume and distortion of nearly every element pushed into the red. 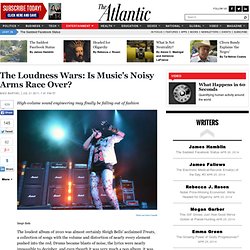 Drums became blasts of noise, the lyrics were nearly impossible to decipher, and even though it was very much a pop album, it was almost painful to listen to. That, of course, was precisely why it thrilled. Sleigh Bells had designed the album to sound that way. Then one day, his own music took him by surprise. Understanding mix space. Mix techniques. Music Production. Music / GEAR. Audio Engineering. Recording. Bruitage.