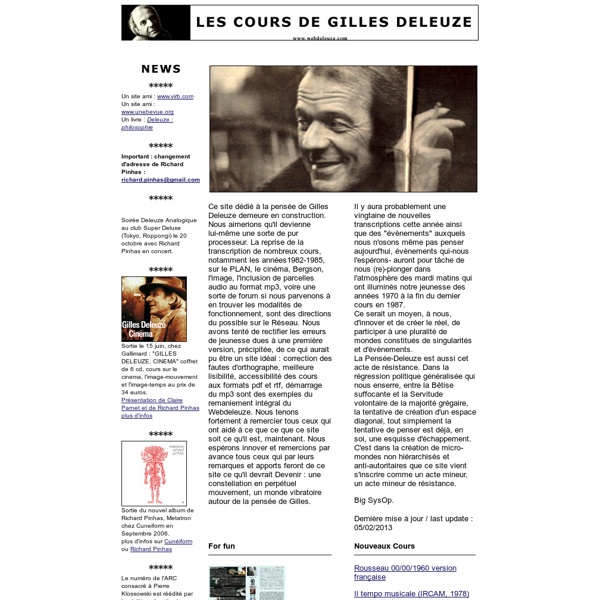 Badiou Studies Badiou Studies 4.1 'S(♀)-Towards a Queer Badiouian Feminism' is now online! It will be available in print from late January 2016. Badiou Studies is a multi-lingual, peer-reviewed journal dedicated to the philosophy and thought of and surrounding the philosopher, playwright, novelist and poet Alain Badiou. Badiou Studies is dedicated to original, critical and challenging arguments that directly engage with the conditions and circumstances of Badiou’s thought. We aim to identify pertinent intellectual discourses, ideas, historiographies and concepts, and seek articles that situate these theories within emerging events in politics, science, art and love.

Slavoj Zizek: 'Now the field is open' - Talk to Al Jazeera From the Middle East to the streets of London and cities across the US there is a discontent with the status quo. Whether it is with the iron grip of entrenched governments or the widening economic divide between the rich and those struggling to get by. But where are those so hungry for change heading? How profound is their long-term vision to transform society?

A. J. Ayer Sir Alfred Jules "Freddie" Ayer (/ɛər/;[2] 29 October 1910 – 27 June 1989)[3] was a British philosopher known for his promotion of logical positivism, particularly in his books Language, Truth, and Logic (1936) and The Problem of Knowledge (1956). He was educated at Eton College and Oxford University, after which he studied the philosophy of Logical Positivism at the University of Vienna. From 1933 to 1940 he lectured on philosophy at Christ Church, Oxford. [4] During the Second World War Ayer was a Special Operations Executive and MI6 agent.[5] He was Grote Professor of the Philosophy of Mind and Logic at University College London from 1946 until 1959, after which he returned to Oxford to become Wykeham Professor of Logic. He was president of the Aristotelian Society from 1951 to 1952 and knighted in 1970.

Ludwig Wittgenstein Ludwig Josef Johann Wittgenstein (26 April 1889 – 29 April 1951) was an Austrian-British philosopher who worked primarily in logic, the philosophy of mathematics, the philosophy of mind, and the philosophy of language.[4] From 1939–1947, Wittgenstein taught at the University of Cambridge.[5] During his lifetime he published just one slim book, the 75-page Tractatus Logico-Philosophicus (1921), one article, one book review and a children's dictionary.[6] His voluminous manuscripts were edited and published posthumously. Philosophical Investigations appeared as a book in 1953 and by the end of the century it was considered an important modern classic.[7] Philosopher Bertrand Russell described Wittgenstein as "the most perfect example I have ever known of genius as traditionally conceived; passionate, profound, intense, and dominating".[8] Born in Vienna into one of Europe's richest families, he inherited a large fortune from his father in 1913. Background[edit] The Wittgensteins[edit]

Intuition of the Instant: French Philosopher Gaston Bachelard on Our Paradoxical Experience of Time “All eternity is in the moment,” Mary Oliver wrote. One of the greatest lines of poetry is also a sublime summation of one of the greatest debates in the history of science and philosophy: the nature of time. In 1932, exactly a decade after Albert Einstein and Henri Bergson’s famous confrontation on the matter, French philosopher Gaston Bachelard (June 27, 1884–October 19, 1962) addressed this question with uncommon acuity of insight in Intuition of the Instant (public library) — a timelessly rewarding exploration of “the problems of duration and the instant, of habit and life.” Société Internationale de Recherche Emmanuel Levinas Emmanuel Levinas across the Generations and Continents The resistance of analytic philosophy to continental philosophy, at least as practiced in the United States, is well known. Anecdotes abound regarding failed attempts to bridge the divide or to discover continuities that have been missed. Increasingly however, younger scholars, thinkers, and critics who have been tempted on the one hand by analytic philosophy, and on the other by Levinas's ethical thinking, are turning to Levinas as a way of challenging the breach. In this year's conference, the tenth anniversary of the existence of the North American Levinas Society, we would like to explore this gap and this potential dismantling. Because the idea for the organization and for the yearly conference began at Purdue (in a graduate course on Levinas), we thought it appropriate that the tenth anniversary should take place at Purdue.

Commentary on Wittgenstein's Philosophical Investigations Shawver Commentary: This commentary in the pages of this website is not meant to replace your reading of Wittgenstein in the original. For that, of course, you will need to acquire the book. This commentary is meant to give you a taste of Wittgentein, or, if you are really ready, to help you get started. The problem is that while Wittgenstein's writing style is quite beautiful, almost poetic, it is so unusual, that all of us, it seems, need a little help in the beginning. It is my hope that after you read this commentary, however, that his meanings will appear transparent to you when you hold your copy of this wonderful book in your hands.

University of Chicago Law School Martha Nussbaum received her BA from NYU and her MA and PhD from Harvard. She has taught at Harvard, Brown, and Oxford Universities. From 1986 to 1993, Ms. SCHOPENHAUERS 38 STRATAGEMS, OR 38 WAYS TO WIN AN ARGUMENT - StumbleUpon Arthur Schopenhauer (1788-1860), was a brilliant German philosopher. These 38 Stratagems are excerpts from "The Art of Controversy", first translated into English and published in 1896. Carry your opponent's proposition beyond its natural limits; exaggerate it.