100 questions to ask people. The Biggest Problem That You Have Is That You Think Too Much. I’ve recently had to catch myself from allowing my mind to run rampant. 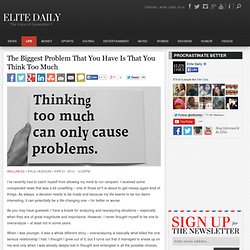 I received some unexpected news that was a bit unsettling – one of those sh*t-is-about-to-get-messy-again kind of things. As always, a decision needs to be made and because my life seems to be too damn interesting, it can potentially be a life-changing one – for better or worse. As you may have guessed, I have a knack for analyzing and reanalyzing situations – especially when they are of great magnitude and importance. However, I never thought myself to be one to overanalyze – at least not in some years.

When I was younger, it was a whole different story – overanalyzing is basically what killed the one serious relationship I had. 21 Things That People With Confidence Do Differently. Confidence is a unifying trait amongst the most successful people in the world. 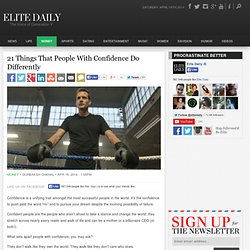 It’s the confidence to push past the word “no” and to pursue your dream despite the looming possibility of failure. Confident people are the people who aren’t afraid to take a stance and change the world; they stretch across nearly every realm and walk of life and can be a mother or a billionaire CEO (or both!). What sets apart people with confidence, you may ask? They don’t walk like they own the world. They walk like they don’t care who does. They wear their confidence by embracing it with humility. They are never the chess piece. They don’t make excuses for themselves. Progressive culture since 1954. Cowardice is contagious: on anonymous reviewing. Yesterday, the Wheeler Centre published another contribution in the slow-burning, long-running debate about anonymous book reviewing, a debate sparked by the practices of the new Saturday Paper. 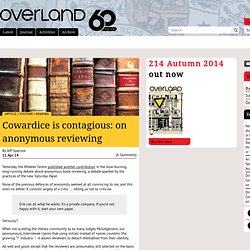 None of the previous defences of anonymity seemed at all convincing to me, and this one’s no better. It consists largely of a critic … telling us not to criticise. Erik can do what he wants. It’s a private company. If you’re not happy with it, start your own paper. Seriously? When not scolding the literary community as so many Judgey McJudgersons, our (anonymous) interviewee claims that using initials instead of names counters ‘the growing “I” industry’ – it allows reviewers to detach themselves from their identity. Clutch Magazine The Digital Magazine for the Young, Contemporary Woman of Color Clutch Magazine. Militants Abduct 100 Nigerian Schoolgirls, Bomb Capital City of Abuja. Members of Boko Haram are believed to be behind the attack on a northeastern Nigerian school late last night. 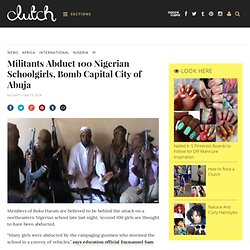 Around 100 girls are thought to have been abducted. “Many girls were abducted by the rampaging gunmen who stormed the school in a convoy of vehicles,” says education official Emmanuel Sam. One girl, who managed to escape, told BBC she and fellow students were sleeping when armed men burst into their hostel. “Three men came into our room and told us not to panic. We later found out that they were among the attackers,” she says. Ten to 15 girls managed to escape the convoy when it had to slow down. “We ran into the bush and waited until daybreak before we went back home,” the girl says.

Boko Haram, whose name means “Western education is forbidden” in the local Hausa language, frequents schools and other educational institutes. The Daily Dot - Your Internet. Your Internet news. Breaking News from Perth and Western Australia. The Voice of Generation Y. Doctor Performs Epic Rap Song To Tell Girl How To Take Care Of Her Broken Leg (Video) Despite the fact that identical twins look almost exactly the same, there are always a few things different for each of them. 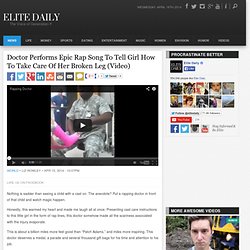 It may be their personalities or the paths they’ve chosen. You wouldn’t be able to tell at a young age, but after years and years of being the sibling of a person identical […] Clearly, I’m single, but were going to rewind a year and a half (oh, that’s pathetic) and pretend my mentality is on the same wavelength as many of you wifed-up readers. Ah, okay, relationship mindset. (Hmm, maybe these annoyances are why I’m single? Always smoke and drive, but never get caught! A couple of days ago, we posted a video of a grandmother riding a roller coaster for the first time in her life. Some may call it gross, others call it liberating. Happiness. If You Could Hear Inside The Mind Of A Williamsburg Hipster (Video)

Nick Cannon sat down for an interview with Big Boy and they were allowed to say whatever they wanted, because it was for the web only. 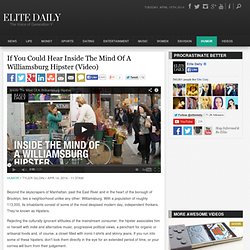 And boy, did they say whatever they wanted. Taking a page out of Lindsay Lohan‘s book, Big Boy asked Cannon to reveal five celebrity females he’s banged. In an […] On the face of it, David Letterman and Stephen Colbert don’t seem to have that much in common. Top 10 Lists - Listverse. Let pictures speaks their language!