Home — Shakespeare's World. How Did Anyone Understand Shakespeare At The Time? William Shakespeare, it is often said, invented a lot of what we currently call the English language. 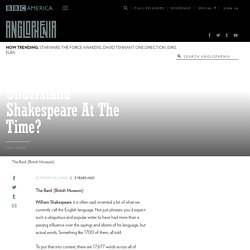 For a Shakespeare Anniversary, an Online Re-Creation of a 1796 Show. Photo. 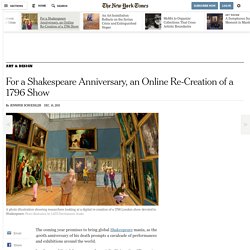 Call to Action: Marketing and Communications in Higher Education. “Per ISO/IEC 27002, in order to achieve and maintain appropriate protection of university assets, all assets should be accounted for and have a nominated owner. 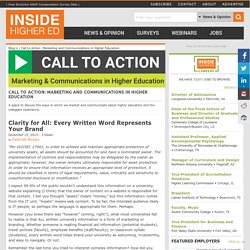 The implementation of controls and responsibilities may be delegated by the owner as appropriate; however, the owner remains ultimately responsible for asset protection. In order to ensure that information receives an appropriate level of protection, it should be classified in terms of legal requirements, value, criticality and sensitivity to unauthorized disclosure or modification.” IQ Learn OnLine - TEACHING SHAKESPEARE INSTITUTE: Master Class Series for 2015-2016 School Year. Do You Speak American . Sea to Shining Sea . American Varieties . AAVE . Hooked. Validating Home Language At the end of 1996, the Oakland, Calif. school board inspired nationwide debate with its endorsement of Ebonics as a separate language. 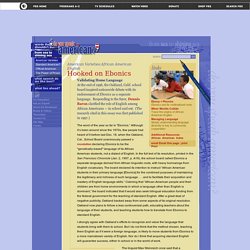 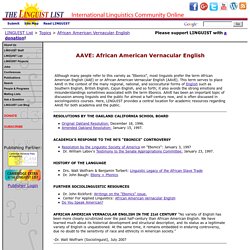 This term serves to place AAVE in the context of the many regional, national, and sociocultural forms of English such as Southern English, British English, Cajun English, and so forth; it also avoids the strong emotions and misunderstandings sometimes associated with the term Ebonics. AAVE has been an important topic of discussion among linguists and the public for almost a half-century now, and is often discussed in sociolinguistics courses. Here, LINGUIST provides a central location for academic resources regarding AAVE for both academia and the public. -Dr. Jamila Lyiscott: 3 ways to speak English. Philly Pizza Shop Owner Calls 911 After He Says He Was Profiled on Flight Home. Only NBC10's Randy Gyllenhaal spoke with two Philadelphia men who were delayed from boarding a flight home from Chicago after they say another passenger complained about them speaking Arabic. 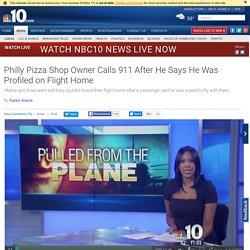 (Published Friday, Nov. 20, 2015) Interactive IPA Chart. Now You Can Add Audioboo Recordings to Thinglink Images. Audioboo and Thinglink are two services that I've introduced a lot of teachers to over the last couple years. 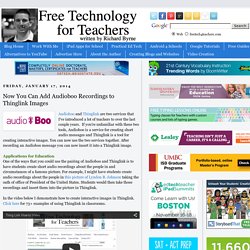 If you're unfamiliar with these two tools, Audioboo is a service for creating short audio messages and Thinglink is a tool for creating interactive images. The sounds of English and the International Phonetic Alphabet. © Tomasz P. 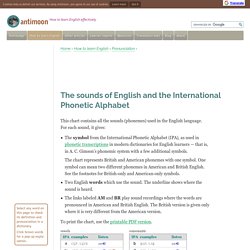 Szynalski, Antimoon.com This chart contains all the sounds (phonemes) used in the English language. For each sound, it gives: Consonants. All Things Linguistic. Consonant & Vowel Charts: NAE - Teaching Pronunciation Skills. Pmwiki.php?n=Novels. To view the details of an annotation, use the '+' sign to expand an entry. 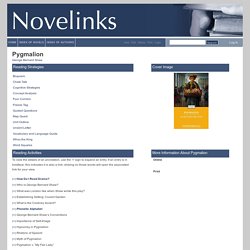 If an entry is in boldface, this indicates it is also a link; clicking on those words will open the associated link for your view. Reading plays is much different than reading novels. Mod 3 Lesson 3.5.2 Consonants: Place of Articulation. Mrs. Page's Classroom Wiki / British Literature and Composition. Seniors: Click here for the most recent graduation information. 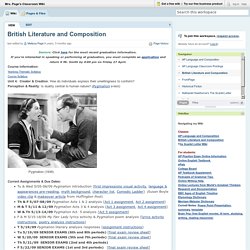 If you're interested in speaking or performing at graduation, you must complete an application and return it Mr. Smith by 4:00 pm on Friday 27 April. Pygmalion - Mrs. Hopkins' Class. Unit%20Outline. George Bernard Shaw. George Bernard Shaw Arms and the Man and Pygmalion George Bernard ShawBiography and links to e-texts of 5 plays, 1 essay, and 1 short fiction. Arms and the ManThis 21-page document is designed to accompany a performance of the play and includes historical background, pre-viewing activities, a Web-based Treasure Hunt, and activities for after viewing the play. Adobe Reader required for access. Man and SupermanText of the play. Islamic Horizons Mar/Apr 13 by Islamic Society of North America. "Backward" Versus "Backwards" This week’s Quick and Dirty Tip is about backward versus backwards because the question of which word to use just came up internally among our editors. Search: harry potter. Spellbinding: the classical roots of magical spells in Harry Potter.

Veni, Vidi, Voldemort. WASHINGTON— My most indelible memory from high school is getting a Coke and peanut-butter cheese crackers from the vending machine at lunchtime and working on my translation of Julius Caesar's ''Commentaries.'' It seemed endless, that eight-year battle for the three-part Gaul, especially when you were fighting it one word at a time. But the mighty Julius Caesar will meet his match when the mighty Harrius Potter arrives in schools.

J. K. Rowling will publish her first book, ''Harry Potter and the Sorcerer's Stone,'' in Latin and ancient Greek, hoping to inspire children to study those two languages, just as she inspired millions of kids to read. Exploring Language and Identity: Amy Tans Mother Tongue and Beyond. ReadWriteThink couldn't publish all of this great content without literacy experts to write and review for us.

If you've got lessons plans, videos, activities, or other ideas you'd like to contribute, we'd love to hear from you. More Find the latest in professional publications, learn new techniques and strategies, and find out how you can connect with other literacy professionals. Untitled. Untitled. 26 Sentence Stems For Higher-Level Discussion In The Classroom. 26 Sentence Stems For Higher-Level Conversation In The Classroom Meaningful conversation can make learning more personal, immediate, and emotional. 02.2 Jumping Frog Dialect and Idioms.docx. Phoebe spells her name.