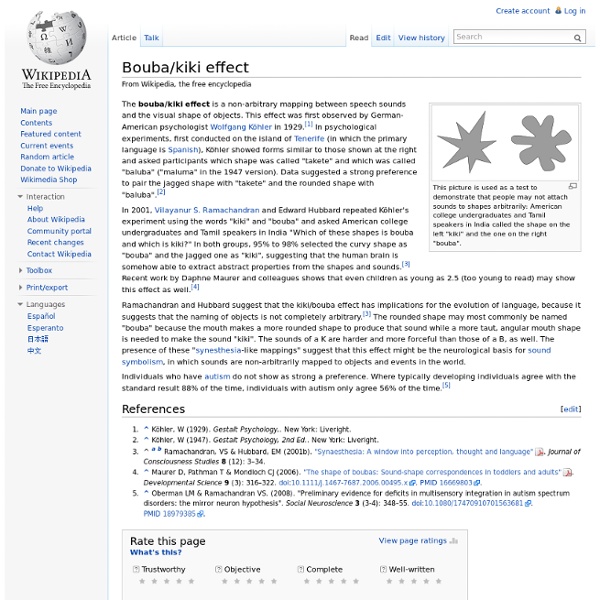 This picture is used as a test to demonstrate that people may not attach sounds to shapes arbitrarily: American college undergraduates and Tamil speakers in India called the shape on the left "kiki" and the one on the right "bouba". The bouba/kiki effect is a non-arbitrary mapping between speech sounds and the visual shape of objects. This effect was first observed by German-American psychologist Wolfgang Köhler in 1929.[1] In psychological experiments, first conducted on the island of Tenerife (in which the primary language is Spanish), Köhler showed forms similar to those shown at the right and asked participants which shape was called "takete" and which was called "baluba" ("maluma" in the 1947 version). Although not explicitly stated, Köhler implies that there was a strong preference to pair the jagged shape with "takete" and the rounded shape with "baluba".[2] In 2001, Vilayanur S. More recently research indicated that the effect may be a case of ideasthesia.[5] Related:  swarleyb

Lexipedia - Where words have meaning My Writing Spot June 14 Henry Reed Henry Reed Henry Reed was the narrow neck in the hourglass of tradition, through which tunes were guided back out into the wider currents of circulation. Alan Jabbour Josh and Henry Reed, circa 1903. Henry Reed, age 19, plays banjo; his older brother Josh plays fiddle. James Henry Neel Reed, known as Henry Reed, was born on April 28, 1884, in the Appalachian Mountains of Monroe County, West Virginia. Henry Reed learned the overwhelming majority of his tunes by ear and retained them by memory. Henry Reed Playing the Fiddle, Accompanied by Bobbie Thompson on Guitar, Kit Olson, photographer, Narrows, Virginia, Summer 1967. Reed's musical influence broadened significantly after 1966 when Karen and Alan Jabbour, graduate students at Duke University, began to audio tape his fiddling. The titles of Henry Reed's fiddle tunes are redolent of the old Appalachian frontier. Billy Bitzer and the Biograph Cameraman G. Together, Bitzer and Griffith forged the grammar and syntax of film.

The Paititi Institute The Ren'Py Visual Novel Engine Ink - Quotes about writing by writers presented by The Fontayne Group Writing "I put a piece of paper under my pillow, and when I could not sleep I wrote in the dark." Henry David Thoreau "Writing is an adventure." Winston Churchill "Know something, sugar? Stories only happen to people who can tell them." Allan Gurganus "... only he is an emancipated thinker who is not afraid to write foolish things." Anton Chekhov "A poet is someone who stands outside in the rain hoping to be struck by lightening." "Whether or not you write well, write bravely." "The first rule, indeed by itself virtually a sufficient condition for good style, is to have something to say."

Creative Writing Prompts, Creative Writing Ideas, Creative Writing Exercises, ... — Helping Writers and Poets Get Some Writing Done Create paintings from photos Did you ever wanted to be a great artist? But unfortunately you are really bad at it? Well that's ok because now with Psykopaint you can be a great artist with no skills. But how does it work? Archetype: The Fiction Writer's Guide to Psychology About a little thing called 750 Words One Page Per Day: A web typewriter for authors. 5 Ways Not to Write a Novel Writing a novel? There's first-draft flow, and there's editing flow. And then there comes a time when you think you might be done, yet the manuscript is still not quite "there." To sell your work to an agent, and then to a publisher, and finally to a great many readers, put thoughts of flow aside now, and consider the following advice. , such as "Danielle was a woman of medium height with brown hair and brown eyes." , such as: "He shaved, and then he wiped off the shaving cream," "She walked to the corner, and she looked both ways," or "We opened the door, and we found the mail on the porch." . such as the following: the difficult task, both share, blend together, on account of, considering the fact that, report back. [Better: Add some tension, impending tension, or trouble to every page. * Did you miss my post about the sometimes unpolished writing of Stephen King ? * Or the one about best writers' resolutions ? Copyright (c) Susan K.