Alchemy and the Endocrine System - an interview with Jose Barrera 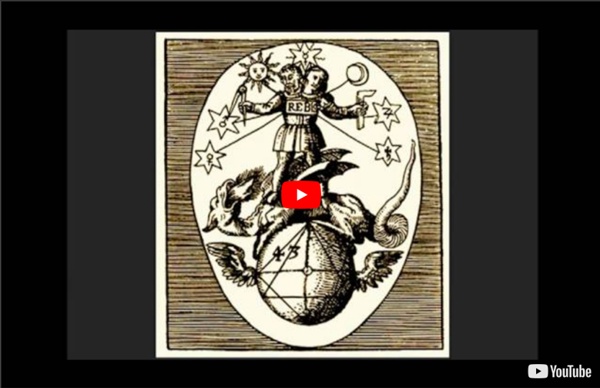 5.06 Wheel of Fortuna - Greenland Theory Although UBS bank was founded in 1854, its logo was most likely derived from the Wheel of Fortuna. Also known as the Union Bank of Switzerland, UBS is an acronym for "Babylon System" as it is the world's largest manager of private wealth assets with over CHF 2.2 trillion in invested assets. The UBS logo depicts 3 keys with the letters "V" and "M" within each one. In the Roman Score (e.g., the Roman alphabet) the letter "V" equates to the letter "B" in the English alphabet which is contructed by adding togethwer a "1" and a "3" for a total of "13" or "B". Therefore, both the letter "V" and the letter "M" contained within the UBS logo equate to "13" which is indicative of the 13 bloodlines of Rome which have since moved to Greenland and control the world financially through UBS. Volkswagon

Eastern Alchemy, Yoga and Tantra Note: This article originally appeared in the Alchemy Journal, a vital resource provided by the International Alchemy Guild in collaboration with Salamander & Sons Press. Images provided by Sera Timms The Alchemy of India, so often overlooked by Westerners, provides a vital decryption of the global Alchemical cipher. Symbol Meaning of Feathers Symbolic Meanings of Feathers Symbol meaning of feathers deal with ascension and spiritual evolution to a higher plane. Feathers were worn by Native American Chiefs to symbolize their communication with Spirit, and to express their celestial wisdom. Also in the Native American Indian culture, feathers represented the power of the thunder gods, along with the power of air and wind. Native American Pueblo Indians would pay homage to the Feathered Sun which is a symbol of the cosmos and the center of existence. Another symbol meaning of feathers also revolves around prayer, and the Pueblo use feather sticks as they dance in prayer for rain during solstice rituals.

The Seven Planets of Alchemy Details Written by Samael Aun Weor Although it may appear to be incredible, it is true and factually certain that the science of Endocrinology is closely related to Sexual Alchemy. The Secret of the Golden Flower Translations[edit] "Gathering the light" -- an illustration of the first stage of meditation There are significant differences between the Wilhelm and Cleary translations. Wilhelm was introduced to the work by his Chinese teacher,[2] while Cleary arrived at his own translation and interpretation. Some translations are given with the word mystery for the word secret in the treatise's title. Classic works of Chinese philosophy preserve a spectrum of pre-modern science, from a time when philosophy and science were less distinct than they appear to be now.[3] The foundations of their teachings often appear incompatible with modern science, yet the teachings are of significant efficacy in providing a degree of awareness that might otherwise remain obscured by modern society’s attention to more stringent standards of rational thought (for a further discussion of possible benefits, see Meditation).

The double meaning of the Androgyne - Key symbols - LOTUS The Androgyne, alpha and omega of the manifested being In the “Symposium” of Plato, Aristophanes builds up his speech about love on a myth. In bygone days, only androgynes used to exist. They were composed of two beings of opposite sex, placed side by side. The Way into the Light - The Teachings of Chakra in Alchemy By Ulrich Arndt The aim of alchemical research and of the practical work in the laboratory is to fathom out the flow of life energy in order to illuminate’ the dark, the sick and the unconscious and ‘direct it into the light’. Great alchemists such as Paracelsus have reached discernment and transcribed their wisdom into practical remedies, namely special elixirs from metals, gems and plants. But what did the alchemists mean by life energy and how may it enliven man and nature? According to the idea of the alchemists (and to old Ayurvedic teachings on health) life energy is closely connected to the ‘light of the seven planets’. The seven planets were added to the five planets known at that time: Mercury, Venus, Mars, Jupiter, Saturn, the Sun and Moon (in Ayurveda there are nine planets, here both moon knots-’planets’ Rahu and Ketu are included as well).