The sounds of English and the International Phonetic Alphabet 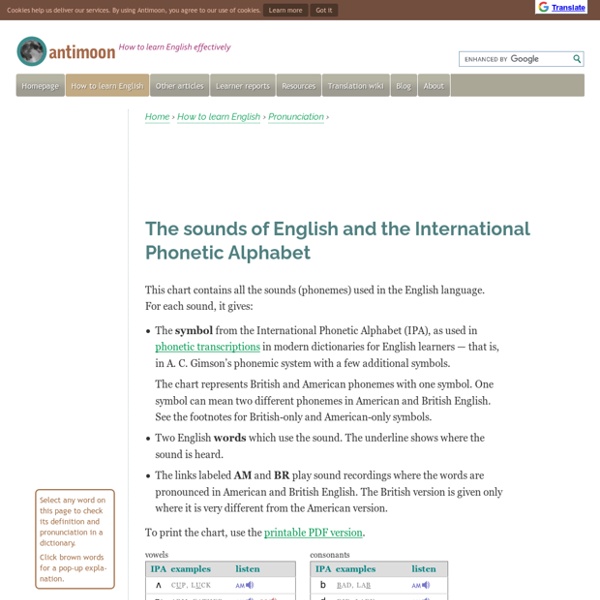 © Tomasz P. Szynalski, Antimoon.com This chart contains all the sounds (phonemes) used in the English language. For each sound, it gives: The symbol from the International Phonetic Alphabet (IPA), as used in phonetic transcriptions in modern dictionaries for English learners — that is, in A. C. To print the chart, use the printable PDF version. Does this chart list all the sounds that you can hear in British and American English? No. For example, this page does not list the regular t (heard in this pronunciation of letter) and the flap t (heard in this one) with separate symbols. So this page actually lists phonemes (groups of sounds), not individual sounds. Take the phoneme p in the above chart. Typing the phonetic symbols You won’t find phonetic symbols on your computer’s keyboard. You can use my free IPA phonetic keyboard at ipa.typeit.org. You can also use the ASCII Phonetic Alphabet, which represents IPA symbols with “normal” characters that you can type on your keyboard.

5 of My Favorite English Games for ESL Students I saved the best for last. My students requested this game more often than any other game we ever played. It's based on the old drinking game "Ring of Fire," modified for the classroom. Materials needed:A standard deck of playing cards, a whiteboard, 20-30 small slips of blank paper, and a bowl. The setup:Almost none! Andrews - Tips for Teaching ESL Beginners and Pre-literate Adults The Internet TESL Journal Holly Andrewsholly.andrews[at]gmail.com Introduction ESL teaching professionals put into practice the theories of applied linguistics in a “real world” sense. I became familiar with real world ESL when I began teaching pre-literate adults the basics of English: how to communicate while they had a working knowledge of the alphabet that would eventually lead to literacy in their second language. This goal may appear straightforward; however, the process is anything but simple.

Active Listening: Using Times Videos, Podcasts and Articles to Practice a Key Skill Listening is a skill that we’re in danger of losing in a world of digital distraction and information overload, writes Seth S. Horowitz in “The Science and Art of Listening.” He continues: And yet we dare not lose it.

Graphs: Vocabulary You need to know some special vocabulary for graphs. In the IELTS exam, you have to write only 150 words, so show how much vocabulary you know. You don’t need to repeat the same words! Movement (Verbs): Up RoseWent upIncreasedGrewShot upSurgedRocketed Movement (Verbs): Down Dalton, Teaching Pronunciation The Internet TESL Journal David F. Daltonddalton [at] academ01.chs.itesm.mxChiapas, Mexico Background When I did my initial training as an E.F.L. teacher, one of the course tutors always described pronunciation as "the Cinderella of language teaching", i.e. she never got to go to the ball.

26 Fresh ESL Conversation Starters to Get Students Talking! 10 Oct I love teaching conversation in the ESL classroom. Part of it must be that because the students able to “converse” in English are better able to demonstrate their personalities, preferences, thoughts… and therefore, I get to know them better. BusyTeacher.org Mobile Deciding how and when to introduce and utilize the International Phonetic Alphabet often has teachers scrambling, but it doesn't have to be stressful or complicated. Follow these tips to introduce a useful tool to your students and of course, don't forget about the powers of Schwa! How to Introduce the IPA (International Phonetic Alphabet) 1What is it?The International Phonetic Alphabet (IPA) is a system used to transcribe words phonetically, or by how they sound.

The Best Poems for Kids As a father of five children who loves to read to them at night, I’ve learned a thing or two about which poems play best for kids. In fact, I’d say there are three key types that appeal to kids the most: Short PoemsFunny PoemsRhyming Poems This post links to several kids poems of each type (in fact, the best!) 45 ways to avoid using the word 'very' Writers Write is your one-stop resource for writers. Use these 45 ways to avoid using the word ‘very’ to improve your writing. Good writers avoid peppering their writing with qualifiers like ‘very’ and ‘really’. They are known as padding or filler words and generally add little to your writing. According to Collins Dictionary: ‘Padding is unnecessary words or information used to make a piece of writing or a speech longer.

Phonics & Pronunciation Activities « ESL Treasure Mexican wave gameAll students sit in a line, the 1st student does a star jump and says the phonic. The next student repeats this and the student at the end of the row says a word. The end student then runs to the other side of the line and they each move along one place. Duck, duck, gooseStudents sit in a circle on the floor. 1 student, ‘Bob’ stands up and taps the head of each student whilst saying a word i.e. apple. ‘Bob’ will eventually tap a student’s head and say a different word, such as orange, this student should then jump up and catch ‘Bob’ before he sits in their seat. If they catch him then ‘Bob’ repeats this process.

Conversation Questions for the ESL/EFL Classroom If this is your first time here, then read the Teacher's Guide to Using These PagesIf you can think of a good question for any list, please send it to us. Home | Articles | Lessons | Techniques | Questions | Games | Jokes | Things for Teachers | Links | Activities for ESL Students Would you like to help? Section B by Susan Gaer, Santa Ana College, San Ana, California dear teacher how are you can I tell you the you are the best teacher I never met in past three years so I like your class and I would like to show as more about conputer and english pratice. Hi Susan how are yuo. My name is Olvin Claros. I'am one of the student in rancho santiago college.