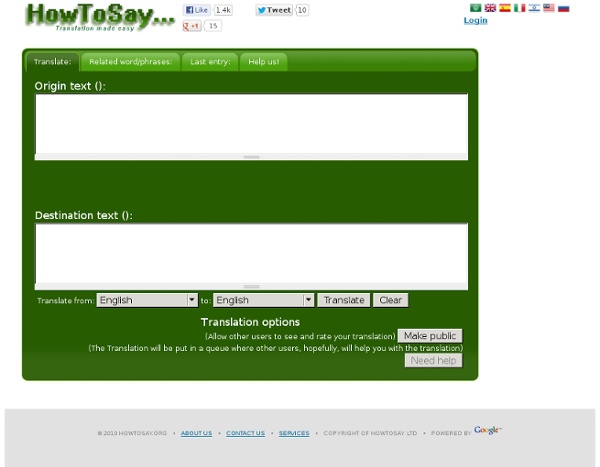 The Daring Librarian Anki - friendly, intelligent flashcards 2Dsearch Grammar and spell checker for better English communication | Ginger Software Ginger Software is developing an array of products that enable mobile devices and computers to understand the intended meaning of natural (human) language input. Ginger Software products are based on an innovative Natural Language Processing (NLP) platform. NLP uses patent-pending technology to decipher the semantic and contextual meaning of text input by comparing it to billions of similar sentences from the Web. Ginger Proofreader, the first product that was released based on the NLP platform, is a free spelling and grammarcheck; it is suitable for both native English speakers and speakers of English as a Second Language (ESL). Ginger Proofreader checks and corrects spellcheck, misused words and grammar mistakes in accordance with the context of the full sentence. Ginger Proofreader can also be used seamlessly in MS-Word, Outlook, PowerPoint, IE, Firefox and Chrome, enabling cross-platform users to correct their text with a single click.

Pirate Ship Before you begin, the children should be taught the commands which the activity involves (see below). Children start by forming a line (one behind the other) directly in front of the teacher. The teacher then shouts a command and the children have to perform the activity associated with that command. Robin Bearden has suggested that: "If playing as a game, those children that get out have to march around the outside of the rest of the group singing 'Oh we oh, A pirate's life for me.'" Mary Ross has also commented that: "Great fun can also be had playing this in the swimming baths - you can't scrub the deck without getting your face in the water, and you can get from one end to the other faster if you swim, although man overboard and Sharks have to be omitted." Thanks to numerous contributions from visitors, many of the commands have more than one possible action. A comment from Rod Hogg: "Just to add to the excellent 'Pirate Ship' in the PE section.

A Base Vocabulary List for any language Your Base Vocabulary: The first ~625 words [Author's note: Behold, the new, improved list:] Check these out at the Word Lists page! Your Base Vocabulary: Your first 625 words This is a new, improved version of an older list of 400 words. In my own studies, I’ve found that having an extra couple hundred words in the beginning makes everything a lot easier; you feel more comfortable with spelling and pronunciation, you recognize many more words in your textbook, and you can start delving into grammar while feeling like a bad-ass. I’ve culled this list from the General Service List and Wordfrequency.info - two well-made frequency lists for English. I’ve also begun a project to get this list professionally translated into a bunch of languages. How to use this list: Pronunciation (in general): Learn your pronunciation rules. The List(s) A quick note about order I’m providing this list in two formats: a thematic list and an alphabetical list. Order is important. Key: Category words (i.e. Enjoy!

Babylon 9 Translation Software and Dictionary Tool Puzzle Pirates: id="A_Pirate.27s_Vocabulary">A Pirate's Vocabulary Ye want to talk like a freebooter or ye want to be espousing like a tried and true Buccaneer? Here be some jargon ye might want to be tryin' out. If ye know of a word this list be missin', please send in on our way. Piratey Expressions Here be some phrases that ye need know if ye want to not be mistaken for no landlubber! Ahoy Used to hail a ship or a person or to attract attention. Arr! Avast! Belay Used in the imperative as an order to stop.Belay there! Blimey! Bucko A friend. Dead men tell no tales Phrase explaining why pirates leave no survivors. Gangway! Hang the jib To look ill-tempered or annoyed. He's gone to Davy Jones's locker He is dead. Me hearties My Comrade; boon companion; good fellow; a term of familiar address and fellowship among sailors. Shiver me timbers! Sink me! Smartly Quickly. Splice the Mainbrace! Yo-ho-ho Completely meaningless, but fun to say. Important Piratey Words Here are some simple words every tried and true Pirate of the High Seas should know: Aye Yes. Me My.