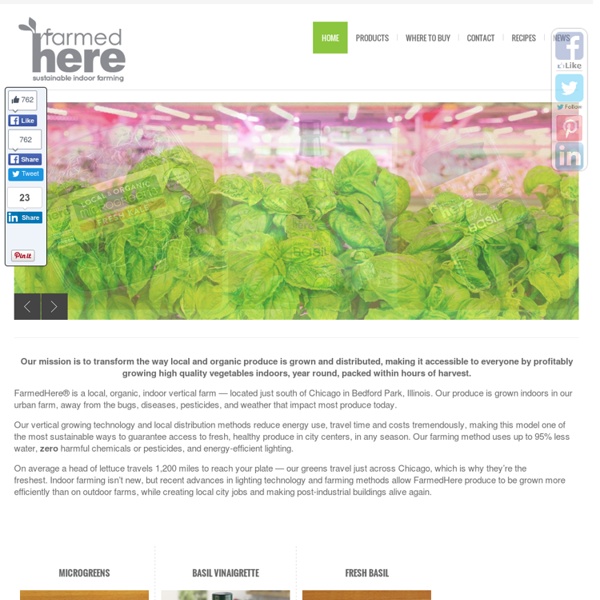 Can Cities Feed Their Inhabitants? David Thorpe looks at the options A greenhouse developed by Priva, an international company that provides innovative solutions for the more efficient control of energy and water within indoor environments. There are three dominant trends to which cities and national governments must respond in order to secure food supplies for their people. First, between 1980 and 2011 the global population not dependent on agriculture doubled to 4.4 billion, and, according to the Food and Agriculture Organization this population is growing at a rate about five times that of the agriculturally dependent population. Second, the amount of agricultural land available for growing food is declining and will soon start to be adversely affected by climate change. Third, in 2011 agricultural subsidies in the world’s top 21 food-producing countries totalled an estimated US$486bn. The growing of food in cities won’t mean that conventional agriculture will disappear. His personal website is: www.davidthorpe.info

This Japanese Vertical Farming Company Wants to... Nuvege (also called “Green Green Earth”) is a hydroponic vertical farming company based out of Kyoto, Japan. Currently they only produce lettuces but they appear to be a well-established business. This is what they say about themselves and their technology: Nuvege’s innovative hydroponic technology is unlike any other conventional hydroponic system that exists today. Nuvege’s proprietary lighting network (NLN) uniquely increases the yield rate of vegetable growth by equalizing light emissions that also advance photosynthesis through increased levels of carbon dioxide. Our unique Vertical Farming Environments utilize “vertical space” for our growth environments. Check out this video from their site (very basic but has some cool shots of their lab)

Pasona O2: Urban Underground Farming Two years ago we first covered Tokyo's underground farm; It is called Pasona O2 and was set up as a means of providing agricultural training to young people who are having trouble finding employment and middle-aged people in search of a second career. Of course, since we first posted the interest in local food has increased dramatically and there has been much more interest in urban farming. We also came upon some new information: The Pasona Group has a traditional farm in Ogata, but they want the "freeters" (Japanese slackers who hop between part time jobs) to get a taste, so to speak. It also is open to middle-aged people in search of a second career. There are a thousand square metres (10,000 SF) growing 100 different kinds of produce. "In the absence of sunlight, the plants are sustained by artificial light from light-emitting diodes, metal halide lamps, and high-pressure sodium vapor lamps. Room 1 Flower field. Room 3 Shelf rice field. Room 4 Fruit/vegetable field.

Superior Wooden Raised Bed Kits - Harrod Horticultural (UK) Superior Raised Beds - Planning and Planting Information To help you make the most of your raised beds - and most importantly enjoy growing in them - we've compiled a list of factors to consider when choosing, siting and filling your beds. For starters, raised beds can be placed directly onto soil, lawn or paving and can be filled directly with a fertile, organic rich, light & friable topsoil/compost such as the vegetable and fruit mix that we supply via our partnership with Rolawn. Calculating the quantity of soil you will require to fill your beds is relatively simple; you just need to multiply the length of your bed by the width and the depth and the figure you arrive at is the amount of compost you'll need in litres. To make things even easier; all the Rolawn soil we supply is delivered in 1000 litre tote bags so you can tell immediately how many bags you'll need to order. The example below should help you with this; Here's that list;

Vertical farming: Does it really stack up? WHEN you run out of land in a crowded city, the solution is obvious: build upwards. This simple trick makes it possible to pack huge numbers of homes and offices into a limited space such as Hong Kong, Manhattan or the City of London. Mankind now faces a similar problem on a global scale. The world's population is expected to increase to 9.1 billion by 2050, according to the UN. Such is the thinking behind vertical farming. Better still, says Dr Despommier, the use of pesticides, herbicides and fungicides can be kept to a bare minimum by growing plants indoors in a controlled environment. A wide variety of designs for vertical farms have been created by architectural firms. “Without artificial lighting the result will be an uneven crop, as plants closest to the windows are exposed to more sunlight and grow more quickly.” The necessary technology already exists. He and his colleagues have created the South Pole Food Growth Chamber, which has been in operation since 2004.

Caliber Biotherapeutics - Home Future Growing® LLC M Brace Raised Garden Bed Brackets with Sunshine Design - Pack of 4 Customize any space with the M Brace®! These braces by Art of the Garden are meant to simplify the process of creating a raised garden bed. They are made of 100% recycled steel and are always made in the U.S.A. Each brace is 10" high, allowing a garden height of 12-14". Any combination of standard 2" lumber (with an actual width of 1.5-1.75") can be used to create this height. It's as easy as 1-2-3 to create a raised garden bed to fit any outdoor space: 1. 2. 3. Keep M Braces looking like new by cleaning them periodically with a mild soap and water mixture.

WHAT IS VERTICAL FARMING?WHAT IS HYDROPONICS?WHAT ARE MICRO NUTRIENTS?ADVANTAGES OF VERTICAL FARMING? FOR PRELIMS AND MAINS GS PAP III | THE FORTUNE STROKE Ø Yes it's vertical because you are trying to grow more crops on a smaller land area and this usually means going upwards into buildings Ø It normally means that, instead of having a single layer of crops over a large land area, you have stacks of crops going upwards Ø It's also associated with city farming and urban farming Ø Who is "Dickson Despommier"? Ø Who is William Frederick Gericke? Ø Dickson Despommier, Columbia Microbiology Professor, is the Godfather of Vertical Farming Ø William Frederick Gericke, in the early 1930’s, pioneered hydroponics at the University of California at Berkley NB: Will read more about it WHY IS IT HAPPENING? Ø By the year 2050, nearly 80% of the earth’s population will reside in urban centers Ø Applying the most conservative estimates to current demographic trends, the human population will increase by about 3 billion people during the interim Ø At present, throughout the world, over 80% of the land that is suitable for raising crops is in use No not at all..!!

MIT City Farm | As part of the City Science Initiative at the MIT Media Lab, ...