The Secrets Behind Your Flowers. In 1967 David Cheever, a graduate student in horticulture at Colorado State University, wrote a term paper titled “Bogotá, Colombia as a Cut-Flower Exporter for World Markets.” 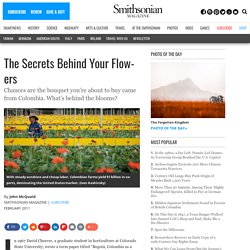 The paper suggested that the savanna near Colombia’s capital was an ideal place to grow flowers to sell in the United States. The savanna is a high plain fanning out from the Andean foothills, about 8,700 feet above sea level and 320 miles north of the Equator, and close to both the Pacific Ocean and the Caribbean Sea. Tokyo’s Vertical Farms - The Future of Farming. Growing Roots - This Farmer Is Taking Root On Your Rooftops // Discovery on Viddsee. A Spoon You Can Eat Is a Tasty Alternative to Plastic Waste. Do Cities Need More Green Roofs? How Aerofarms' vertical farms grow produce. 70 Point De-Laval Rotary Milking Parlour. Glenapp Farm Ayrshire.DairyCo. 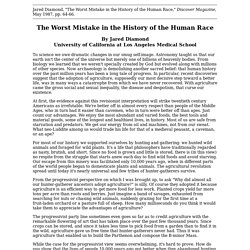 By Jared Diamond University of California at Los Angeles Medical School To science we owe dramatic changes in our smug self-image. Astronomy taught us that our earth isn't the center of the universe but merely one of billions of heavenly bodies. From biology we learned that we weren't specially created by God but evolved along with millions of other species. IKEA Just Released Free Instructions For A Spectacular Sustainable DIY Garden. De la nourriture pour toute la famille - Les plus beaux trompe-l'oeil. Edible Cutlery (#innovation series 3) Wyoming Vertical Farm Produces 37,000 Pounds of Greens on the Side of a Parking Garage!

Jackson Hole, Wyoming, may not be the first place people pick out on a map to travel to, but it does garner significant tourist numbers. 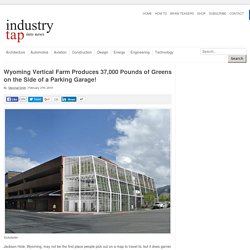 Still, the tourists only stay for short periods of time. The town experiences long, cold, bitter winters, resulting in its produce taking a huge hit because quite simply, residents can’t grow much of anything due to the harsh weather. Inhabitat - Green Design, Innovation, Architecture, Green Building. FUdiet: The Science of Weight Loss, Nutrition, and Fitness. One piece of diet advice I dole out on a regular basis is, “if you love to eat, don’t drink your calories!” 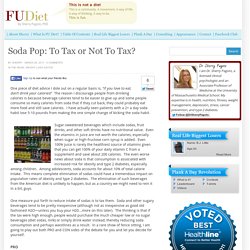 The reason I discourage people from drinking calories is because beverage calories tend to be easier to give up and some people consume so many calories from soda that if they cut back, they could probably eat more food and still save calories. I have actually seen patients with a 2+ a day soda habit lose 5-10 pounds from making the one simple change of kicking the soda habit. Sugar-sweetened beverages which include sodas, fruit drinks, and other soft drinks have no nutritional value. Even the vitamins in juice are not worth the calories, especially when sugar or high-fructose corn syrup is added. Even 100% juice is rarely the healthiest source of vitamins given that you can get 100% of your daily vitamin C from a supplement and save about 200 calories.

One measure put forth to reduce intake of sodas is to tax them. Puerto Rico Considers “Fat” Tax on Obese Children: A Fight for Children’s Health or a Tax Collection Scheme? It seems that the Puerto Rico government is scrambling to find ways to collect tax revenues to satisfy its debt obligations. 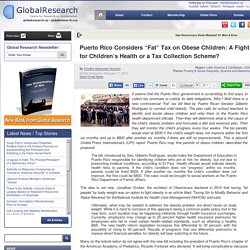 Why? Well there is a new controversial “Fat” tax bill filed by Puerto Rican Senator Gilberto Rodriguez to combat child obesity. The plan calls for school teachers to identify and locate obese children and refer them to the Puerto Rico health department officials. Then they will determine what is the cause of the child’s obesity problem and formulate a diet and exercise plan. Then they will monitor the child’s progress every four weeks. America Revealed. Over the past century, an American industrial revolution has given rise to the biggest, most productive food machine the world has ever known. 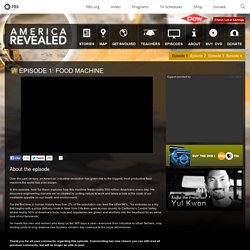 In this episode, host Yul Kwon explores how this machine feeds nearly 300 million Americans every day. He discovers engineering marvels we’ve created by putting nature to work and takes a look at the costs of our insatiable appetite on our health and environment. For the first time in human history, less than 2% of the population can feed the other 98%. Yul embarks on a trip that begins with a pizza delivery route in New York City then goes across country to California’s Central Valley, where nearly 50% of America’s fruits, nuts and vegetables are grown and skydives into the heartland for an aerial look of our farmlands. BBC Two - This World, The Tea Trail with Simon Reeve, A Maasai community adapts its way of life.

SHOW®/WORLD - A New Way To Look At The World.