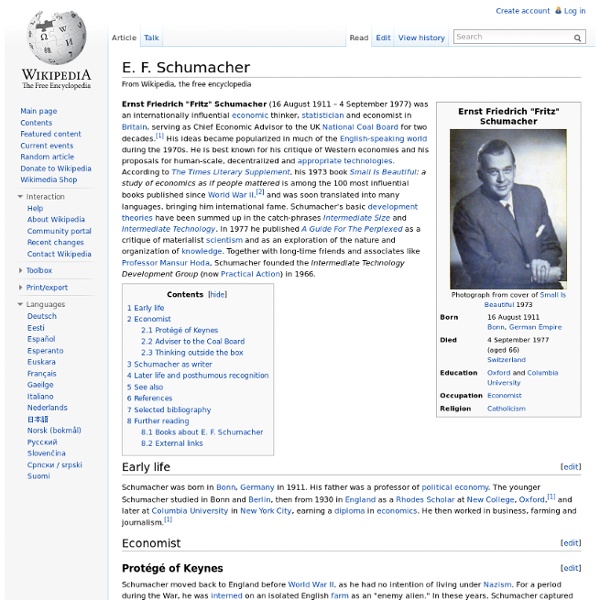 Ernst Friedrich "Fritz" Schumacher (16 August 1911 – 4 September 1977) was an internationally influential economic thinker, statistician and economist in Britain, serving as Chief Economic Advisor to the UK National Coal Board for two decades.[1] His ideas became popularized in much of the English-speaking world during the 1970s. He is best known for his critique of Western economies and his proposals for human-scale, decentralized and appropriate technologies. According to The Times Literary Supplement, his 1973 book Small Is Beautiful: a study of economics as if people mattered is among the 100 most influential books published since World War II,[2] and was soon translated into many languages, bringing him international fame. Schumacher's basic development theories have been summed up in the catch-phrases Intermediate Size and Intermediate Technology. Early life[edit] Schumacher was born in Bonn, Germany in 1911. Economist[edit] Protégé of Keynes[edit] Adviser to the Coal Board[edit]

Oil Spill Disaster on New Zealand Shoreline - Alan Taylor - In Focus Nine days ago, a Liberian-flagged container ship called the Rena ran aground on Astrolabe Reef, 14 miles offshore from Tauranga Harbor on New Zealand's North Island. In addition to the 2,100 containers aboard, the Rena was carrying 1,700 tons of fuel oil and another 200 tons of diesel fuel. A cracked hull and rough seas have dislodged more than 80 containers and spilled some 300 tons of oil already, fouling Tauranga beaches and reportedly killing some 1,000 birds so far. Salvage teams are racing to offload as much remaining oil as possible while cleanup crews are hard at work, coping with New Zealand's worst environmental disaster in decades. [32 photos] Use j/k keys or ←/→ to navigate Choose: The Liberian-flagged container ship Rena, stuck aground on a reef off the coast of Tauranga, New Zealand, on October 13, 2011. The stricken Rena is pounded by waves on October 13, 2011 in Tauranga, New Zealand. The stricken Rena leaks more oil on October 13, 2011 in Tauranga, New Zealand.

James Baldwin James Arthur Baldwin (August 2, 1924 – December 1, 1987) was an American novelist, essayist, playwright, poet, and social critic. Baldwin's essays, as collected in Notes of a Native Son (1955), explore palpable yet unspoken intricacies of racial, sexual, and class distinctions in Western societies, most notably in mid-20th-century America, and their inevitable if unnameable tensions.[1] Some Baldwin essays are book-length, for instance The Fire Next Time (1963), No Name in the Street (1972), and The Devil Finds Work (1976). Early life[edit] When Baldwin was an infant, his mother, Emma Berdis Jones, divorced his father amid his drug abuse and moved to the Harlem section of Manhattan in New York City. There, she married a preacher, David Baldwin. James spent much time caring for his several younger brothers and sisters. His stepfather died of tuberculosis in summer of 1943 soon before James turned 19. Schooling[edit] Religion[edit] Greenwich Village[edit] Baldwin's expatriation[edit]

Save Our Earth : Its an Illusion by John Harris. Please read each and everyone of you, this is so important What you are about to read may at first confuse some of you, some may not believe and some will be shocked. What you are about to read is truth and I urge you all to stay and read all this information and understand it because it concerns you and it concerns your children and all your property. Lawful Rebellion The British Constitution Group Stoke on Trent 24th January 2009 Its an illusion (Transcript on a talk by John Harris called ‘Its an illusion’ from The People’s United Community www.TPUC.org ) To watch the video please go to What I want to do today is show you a different perspective. (Slide shows the following;) Do you believe ‘parliament’ to be elected to ‘REPRESENT’ the people and their wishes? Do you believe in ‘POLITICS’? Do you believe that the only way to sort this country out is to get another ‘POLITICAL PARTY’ elected into power? Do you believe ‘ACTS’ of parliament (STATUTES) are ‘LAW’? Do you believe ‘STATUTORY INSTRUMENTS’ are ‘LAW’? Its been abused.

Albert Camus Albert Camus (French: [albɛʁ kamy] ( Camus did not consider himself to be an existentialist despite usually being classified as one, even during his own lifetime.[1] In an interview in 1945, Camus rejected any ideological associations: "No, I am not an existentialist. Sartre and I are always surprised to see our names linked...".[2] Camus was born in French Algeria to a Pied-Noir family, and studied at the University of Algiers. Camus was awarded the 1957 Nobel Prize for Literature "for his important literary production, which with clear-sighted earnestness illuminates the problems of the human conscience in our times".[5] Early years[edit] Camus joined the French Communist Party in the spring of 1935, seeing it as a way to "fight inequalities between Europeans and 'natives' in Algeria." Marriages[edit] In 1934, Camus married Simone Hié, but the marriage ended as a consequence of infidelities on both sides. [edit] Revolutionary Union Movement and Europe[edit] Death[edit] Literary career[edit]

sgtdroopybutt comments on "Carbon Blueprint of Life" - Incident Blotter Will Eisner William Erwin "Will" Eisner (March 6, 1917 – January 3, 2005) was an American cartoonist, writer, and entrepreneur. He was one of the earliest cartoonists to work in the American comic book industry, and his series The Spirit (1940–1952) was noted for its experiments in content and form. In 1978, he popularized the term "graphic novel" with the publication of his book A Contract with God. He was an early contributor to formal comics studies with his book Comics and Sequential Art (1985). The Eisner Award was named in his honor, and is given to recognize achievements each year in the comics medium; he was one of the three inaugural inductees to the Will Eisner Comic Book Hall of Fame. Biography[edit] Family background[edit] Eisner's father Shmuel "Samuel" Eisner was born March 6, 1886, in Kollmei, Austria-Hungary, and was one of eleven children. Eisner's mother, Fannie Ingber, was born to Jewish parents from Romania April 25, 1891, on a ship bound for the US. Early life[edit]

L. Frank Baum Childhood and early life[edit] Baum was born in Chittenango, New York, in 1856, into a devout Methodist family. He had German, Scots-Irish, and English ancestry, and was the seventh of nine children of Cynthia Ann (née Stanton) and Benjamin Ward Baum, only five of whom survived into adulthood.[2][3] He was named "Lyman" after his father's brother, but always disliked this name, and preferred to go by his middle name, "Frank".[4] Benjamin Baum was a wealthy businessman, a barrel maker who ultimately made a fortune in the Pennsylvania oil rush. Baum grew up on his parents' expansive estate, Rose Lawn, which he always remembered fondly as a sort of paradise.[5] As a young child, he was tutored at home with his siblings, but at the age of 12, he was sent to study at Peekskill Military Academy. He was a sickly child given to daydreaming, and his parents may have thought he needed toughening up. Baum started writing at an early age, perhaps due to an early fascination with printing.

From toxicity to life: arsenic proves to be a building block LLNL's Jennifer Pett-Ridge, right, runs the NanoSIMS and analyzes some arsenic-grown cells from Mono Lake as NASA/USGS's Felisa Wolfe-Simon observes. High Resolution Image LIVERMORE, Calif. - Arsenic -- an element that triggers death for most Earthly life forms -- is actually allowing for bacterium to thrive and reproduce. In a study that may prompt the rewriting of textbooks, a team of astrobiologists and chemists has found the first known living organism that can use arsenic in place of phosphorus in its major macromolecules. Oxygen, carbon, hydrogen, nitrogen, sulfur and phosphorous are the six basic building blocks of life on Earth. The new study by Lawrence Livermore National Laboratory and led by NASA and the U.S. Mono Lake, located in eastern California, is an alkaline and hypersaline lake with high dissolved arsenic concentrations and is believed to have formed more than 760,000 years ago from neighboring volcanic eruptions.

The Strokes The Strokes are an American rock band formed in New York City in 1998, consisting of Julian Casablancas (lead vocals), Nick Valensi (guitar, backing vocals), Albert Hammond, Jr. (guitar, backing vocals), Nikolai Fraiture (bass guitar) and Fabrizio Moretti (drums, percussion). Upon the release of their debut album Is This It in 2001, the group met wide critical acclaim.[5] Since then, the band has maintained a fan base in New York City and elsewhere in the United States, the United Kingdom, Argentina, Ireland, Canada, France, Brazil and Australia[citation needed]. A number of members have embarked on a variety of side projects, though they regrouped for a fifth album, titled Comedown Machine, released on March 26, 2013.[6] They have sold over 5 million albums. [7] They are one of the many indie rock bands to hail from the US at the dawn of the 21st century and helped augment the garage rock revival movement. History[edit] Beginnings and The Modern Age EP (1998–2001)[edit]