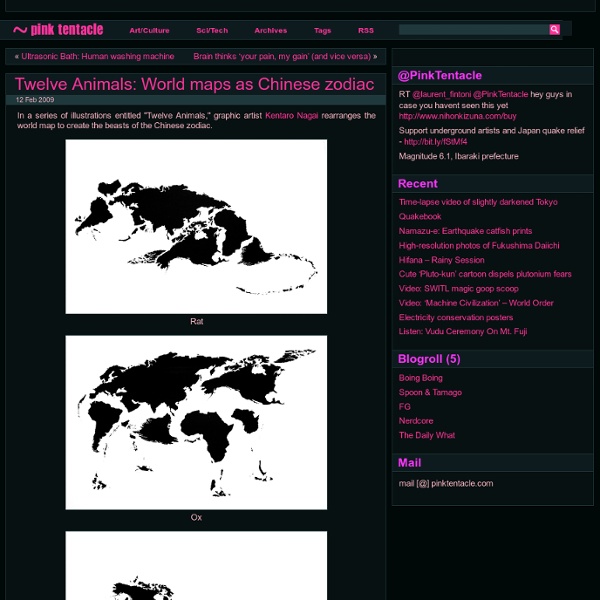 Riusuke Fukahori Paints Three-Dimensional Goldfish Embedded in Layers of Resin First: watch the video. Japanese artist Riusuke Fukahori paints three-dimensional goldfish using a complex process of poured resin. The fish are painted meticulously, layer by layer, the sandwiched slices revealing slightly more about each creature, similar to the function of a 3D printer. I really enjoy the rich depth of the pieces and the optical illusion aspect, it’s such an odd process that results in something that’s both a painting and sculptural. carnovsky ex For info and pricing please contact: carnovsky@carnovsky.com Download Pdf catalog of RGB BLACK wallpapers (12 Mb)

this isnt happiness&amp;8482; (Escher’s ‘Relativity’ in Lego)&amp;&amp; ABOUT ARCHIVE FOLLOW Facebook Twitter Instagram Google+ Ads Via The Deck Escher’s ‘Relativity’ in Lego share it 1,373 notes Awesome Nature Photos Of Incredible Places - 39 Examples Nature photography tends to put a stronger emphasis on the aesthetic value of the photo than other photography genres, such as photojournalism and documentary photography. Apart from this difference, nature photography will always be more surprising than any other type of photography. Nature, with all its resources creates far more beautiful scenery than what a man can create artificially. Kochia Hill, Hitachinaka City, Japan Japanese Tea Field

Animal Constellation Chalk Art Paris-based Philippe Baudelocque takes chalk art to a whole new level. Drawing on a black background, his incredibly intricate animals look like constellations on a dark night. Each drawing is composed of cells, and each cell has its own pattern. With beautiful layers, these three-dimensional animals look like they're ready to jump off the city walls. James Charles - Pop Cultured Currency Repurposing existing objects for other uses is always cool. Repurposing them for pop culture references though is even better. James Charles has been doing just that with United States currency for the last year or so. Many more after the jump. Without Hope, Sin Esperanza, Frida Kahlo, C0520 A lack of appetite resulting from her many surgeries and numerous illnesses, left Frida very thin. Her doctor, Dr Eloesser, prescribed complete bed rest and a fattening diet of puréed food every two hours. In this painting, the artist portrays what she considered to be a "forced feeding" diet.

Staring Cats Light Sculpture is Fixating Need Help? Staring Cats Light Sculpture Is Fixating - Core77 Curated by Nuttawat Sujarit Yuki Matsueda ‘While most designers are busying adding more and more elements into their artworks, Japan-based Yuki Matsueda has, however, managed to let some elements escape from his art pieces. The result seems quite amazing… A vivid 3D image is successfully created and all the elements are believed to be more shocking than those stay still on paper.’ koikoikoi.com - Visual Arts Magazine, graphic design, illustration, photography, interviews, inspiration, tutorials Behind every image there is a visual story with a lot of details and humorous message. This funny set of images is made by creative Argentinian photographer who call himself “Marker” and you can see how Star Wars toys are going through recession. > thesecretlifeoftoys.com

Jellyfish-like Bowls Photos: Gülnur Özdağlar Plastic bottles -- that environmental bane of a disposable, modern society -- can be both an abundant form of pollution in waterways and oceans, as well as a materials source for mind-boggling art. In the skillful hands of Turkish architect and upcycling designer Gülnur Özdağlar the unremarkable PET plastic bottle is transformed into gorgeously diaphanous and functional objects like bowls and jewelry.