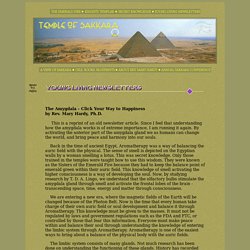 Mary Hardy, Ph.D. This is a reprint of an old newsletter article. Since I feel that understanding how the amygdala works is of extreme importance, I am running it again. TD Lingo and The REAL History of The Dormant Brain Research Lab - T.D. Lingo. By Neil Slade, Brain Lab Assistant to TD Lingo 1982-1993 BIO: Neil Slade- is an author of seven books on brain and behavior including The Frontal Lobes Supercharge, Tickle Your Amygdala, and Secret of The Dormant Brain Lab. 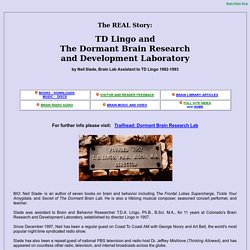 He is also a lifelong musical composer, seasoned concert performer, and teacher. Slade was assistant to Brain and Behavior Researcher T.D.A. Lingo, Ph.B., B.Sci. M.A., for 11 years at Colorado's Brain Research and Development Laboratory, established by director Lingo in 1957. Since December 1997, Neil has been a regular guest on Coast To Coast AM with George Noory and Art Bell, the world's most popular night time syndicated radio show.

Slade has also been a repeat guest of national PBS television and radio host Dr. His educational books are easy to understand explorations of how the human brain works, and how to access creativity and problem solving. Slade.cosmic. [Lingo]: Cosmic Consciousness is the radio carrier wave upon which advanced problem-solving teaching/leaning information is communicated from an advanced civilization to a growing civilization. 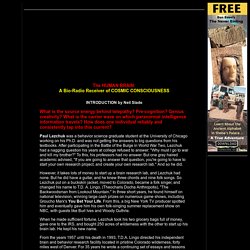 Cosmic Consciousness is distributed uniformly throughout universe with space/time/energy/matter. Once one perceives the Self within this unified reality field, infinitude of being begins. Cosmic Consciousness transmits data from brain #1 to brain #2 in zero time, regardless of distance; regardless of position of planets within the galaxy; regardless of position of galaxies within the universe. [Slade]: Descriptions of "cosmic consciousness" arise from various spiritual, religious, and mystical sources, and now more recently from the perception and experience of brain lab participants after a program of internal brain self-control. Temple of Sakkara - The Amygdala, click your way to happiness. The Crazy Wisdom of TDA Lingo. 6 April 2014: I wrote this article so long ago I can’t even remember the year. 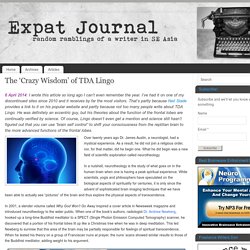 I’ve had it on one of my discontinued sites since 2010 and it receives by far the most visitors. That’s partly because Neil Slade provides a link to it on his popular website and partly because not too many people write about TDA Lingo. He was definitely an eccentric guy, but his theories about the function of the frontal lobes are continually verified by science. Of course, Lingo doesn’t even get a mention and science still hasn’t figured out that you can use “brain self control” to shift your consciousness from the reptilian brain to the more advanced functions of the frontal lobes. Over twenty years ago Dr.

In a nutshell, neurotheology is the study of what goes on in the human brain when one is having a peak spiritual experience. In 2001, a slender volume called Why God Won’t Go Away inspired a cover article in Newsweek magazine and introduced neurotheology to the wider public. The Crazy Wisdom of TDA Lingo. AMYGDALA: Amazing Music Brain Adventure. This imaging alone increases frontal lobes activity and begins increases in creativity, intelligence, and so on. 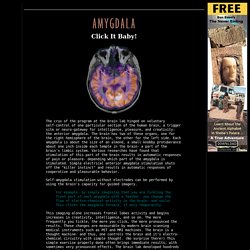 The more frequently you tickle, the more you click, the more pronounced the results. These changes are measurable by modern brain scanning medical instruments such as PET and MRI machines. The brain is a thought machine- and thus, one controls the brain and it's electro-chemical circuitry with simple thought. (No surprise there!) This simple exercise properly done often brings immediate results, with sometimes very pronounced effects. When a person learns how to internally stimulate the amygdala and voluntarily increase frontal lobes processes at will, it can eventually result in a very intense peak phenomenon known as "frontal lobes transcendence" or "popping your frontal lobes". What is it like to pop your frontals? That's something like what popping your frontal lobes feels like.

Why has nature provided the human brain with this emotional fireworks rocketship blast? AMYGDALA: Amazing Music Brain Adventure. Want you to think of the best time you have ever had in your life........Got it? Now, multiply that experience, that feeling, times ten. Multiply it times a hundred, or a thousand. AMYGDALA: Amazing Music Brain Adventure.

AMYGDALA: Amazing Music Brain Adventure. Popping Your Frontals No surprise that these things are actually possible once you realize that the three pounds of solid neurocircuitry between every person's ears is the most complex structure we know of in the entire universe. 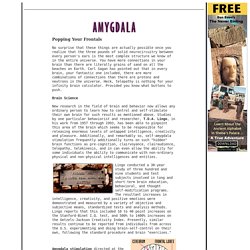 You have more connections in your brain than there are literally grains of sand on all the beaches on Earth. AMYGDALA: Amazing Music Brain Adventure. By deliberately focusing mental energy and activity- a simple thought process- on the anterior amygdala, this causes an increase in frontal lobes processes, which instantly causes increased and measurable levels of intelligence, creativity, pleasure, and often various "normal-paranormal" experiences. 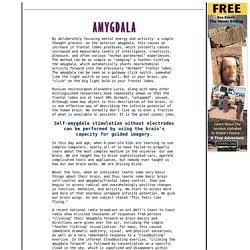 The method can be as simple as "imaging" a feather tickling the amygdala, which automatically shunts neurochemical activity forward into the previously "dormant" frontal lobes. The amygdala can be seen as a gateway click switch, somewhat like the light switch on your wall. But in your brain, you "click" on the big light bulb in your frontal lobes. Russian neurosurgeon Alexandre Luria, along with many other distinguished researchers have repeatedly shown us that the frontal lobes are at least 90% dormant, "untapped", unused. "The Secret Behind The Chakras" By Laura Lee Mistycah The information I'm about to disclose to you may shock you, may scare you, and may upset you…OR it may LIBERATE YOU.... 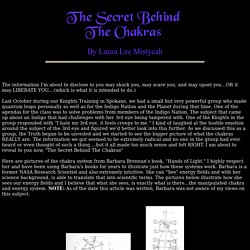 (which is what it is intended to do.) Last October during our Knights Training in Spokane, we had a small but very powerful group who made quantum leaps personally as well as for the Indigo Nation and the Planet during that time.