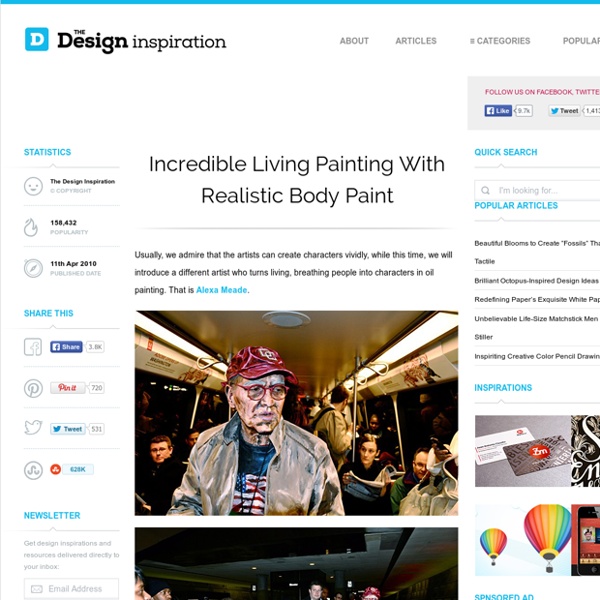 Usually, we admire that the artists can create characters vividly, while this time, we will introduce a different artist who turns living, breathing people into characters in oil painting. That is Alexa Meade. Alexa Meade is a 23-year-old artist based in Washington, DC area. She spent four summers interning on Capitol Hill and in 2008 was a press staffer on the Obama Campaign. She graduated in 2009 from Vassar College in Poughkeepsie, NY with a bachelor’s degree in political science. She never attended art school nor has she ever taken advanced painting courses. She applies acrylic paint to the surfaces of people, objects, and walls in a broad brushstroke that mimics the appearance of brushwork in a painting in a technique that she innovated.

6 Things I Learned About Painting From the Met's Blockbuster Matisse Show Last week, I finally visited the Met’s stellar exhibition, “Matisse: In Search of True Painting.” The show was, as I hoped, a refreshingly engaging experience that breaks down Henri Matisse’s meticulous and academic painting process into sections, addressing recurring themes that are applicable to both modern painters and art students today. In a recent article, New York Times art critic Roberta Smith aptly called the show “one of the most thrillingly instructive exhibitions about this painter, or painting in general, that you may ever see.” She’s not wrong. Concepts like how to paint light, when to use the color black, or how long to spend on the details of a model you have limited time with are best learned from a painter who spent his lifetime asking these questions, and who was willing to share the fruits of his labor.

Fascinating Lamps by Calabarte Calabarte is the pseudonym of a Polish artist named Przemek Krawczynski, whose art takes on a peculiar but incredibly beautiful form: cool lamps. The name itself is a portmanteau of two words – art (obviously), and calabash, the fruit that carries his imagination. The calabash is a bottle gourd originating in India, although Calabarte gets his supply from Senegal. Due to ancient domestication and usage, the bottle gourd has an incredibly tough outer shell. In the past, the gourd’s usage was defined mostly as a water container, due to having a tough, smooth shell with an ergonomic shape for handling, and natural buoyancy on water.

Naples Sailor Paints Haze Gray Masterpiece Better than the Mona Lisa. GAETA, ITALY – Raphael. Michelangelo. Anamorphic Sculptures London-based artist Jonty Hurwitz creates ‘Anamorphic Sculptures’ which only reveal themselves once facing a reflective cylinder. Hurwitz took an engineering degree in Johannesburg where he discovered the fine line between art and science. He has lived in England for many years, working in the online industry though he quietly levitated into the world of art inspired by a need to make ‘something real’. Hurwitz discovered that he could use science as an artistic paintbrush. Each of his sculptures is a study on the physics of how we perceive space and is the stroke of over 1 billion calculations and algorithms. Fascinatingly Fanciful Art by Dan Elijah G. Fajardo Article by Hyathiz I love my dogs, reading books, and taking great pictures with my battered but still functional digital camera. Taking great pictures with a high end camera is almost too easy, producing fantastic images with an outdated one is an accomplishment by itself. By Hyathiz on August 12, 2012, in Illustrations Tags: Adobe Photoshop, Andy Warhol, Angry Birds, art, Dan Elijah, Dan Elijah G. Fajardo, fantasy, Filipino, Juan Luna, Philippine National, Philippine National artist, space

13 Disturbing Pieces of Art from History The media is often criticized for showing violent and disturbing imagery. Movies, TV, video games, tabletop RPGs, comic books, and various other things have all gone through periods where they're blamed for exposing children to dark and unsettling things. But as these fine art examples prove, violent and disturbing imagery is nothing new.