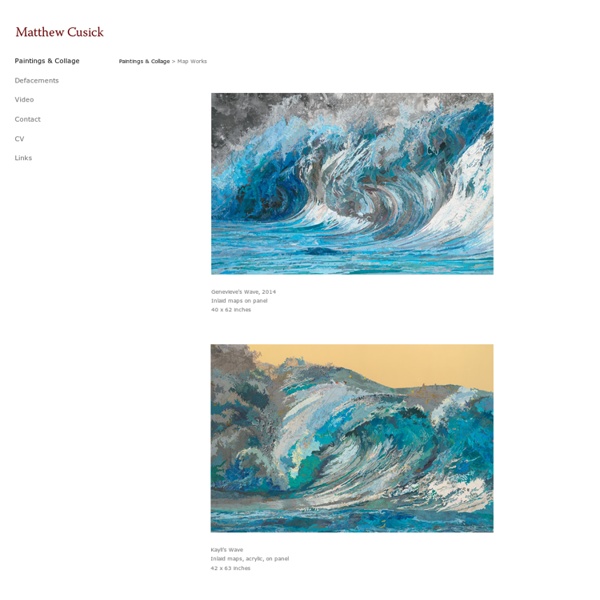 Stained glass posters of famous 80s movies 80s Movie Posters is a series of, well, 80s movie posters designed in the style of stained glass windows. Van Orton Design included iconic movies like Robocop, The Terminator, Blade Runner, and Back to the Future. The posters used bold lines as base for the illustration, then topped it with colorful and vibrant colors to give it that signature stained glass look. So now we have the glass windows, who can volunteer to make the rest of the 80s-inspired cathedral? Anyone? Via Design Taxi Steve Smith I don’t know what’s the deal with these hyperrealist artists, once again, great work, but absolutely no information…so I’ll just tell you to look at Steve Smith’s pretty paintings, who apparently dreams of sunny days, holidays and sunglasses. Can’t say I blame him!

Extraordinary Brush-Less Paintings Amy Shackleton, who is only 25-years-old, is a unique artist. While her paintings use tons and tons of paint, she doesn't use paintbrushes to create them! Rather, she squeezes paint onto canvases and then allows the paint to naturally drip. She then rotates the canvas to control the direction of the drips, making her paintings appear natural yet controlled. Our Problems and Flaws Turned Into Cartoons by Angel Boligan Art can be used to express powerful ideas and messages, and Cuban cartoonist Angel Boligan’s political and social cartoons are a perfect example of just how expressive and critical art can be. His extensive collection of comics provide a scathing commentary on contemporary politics and society. Each comic bears a deep and powerful meaning. Don’t just take our word for it – Boligan has received more than 130 international awards for his work.

Riusuke Fukahori Paints Three-Dimensional Goldfish Embedded in Layers of Resin First: watch the video. Japanese artist Riusuke Fukahori paints three-dimensional goldfish using a complex process of poured resin. The fish are painted meticulously, layer by layer, the sandwiched slices revealing slightly more about each creature, similar to the function of a 3D printer. I really enjoy the rich depth of the pieces and the optical illusion aspect, it’s such an odd process that results in something that’s both a painting and sculptural. Wonderful. Art Supplies Every Artist Should Own - Art Questions Answered Many of these tools may not be considered traditional “art supplies”, but they will make life as an artist easier, no matter what type of artist the person may be. Lighting Good lighting is a must for any artist. Northern light is said to be the best to paint with.

Angel BOLIGAN CORBO | CARTOON GALLERY Angel Boligan Corbo was born on 10th May 1965 in San Antonio de los Baňos, Havana, Cuba. Since 1992 he lives in Mexico. He studied at the National School of Plastic Arts Instructors in Havana, from which he graduated in 1987 as a Teacher of Plastic Arts. He worked as editor, illustrator and cartoonist for magazine „El Universal“ and newspaper „Conozca más“. Currently he is working as editorial cartoonist for the Humour magazine „El Chamuco“. He does cultivate all branches of graphic humour.