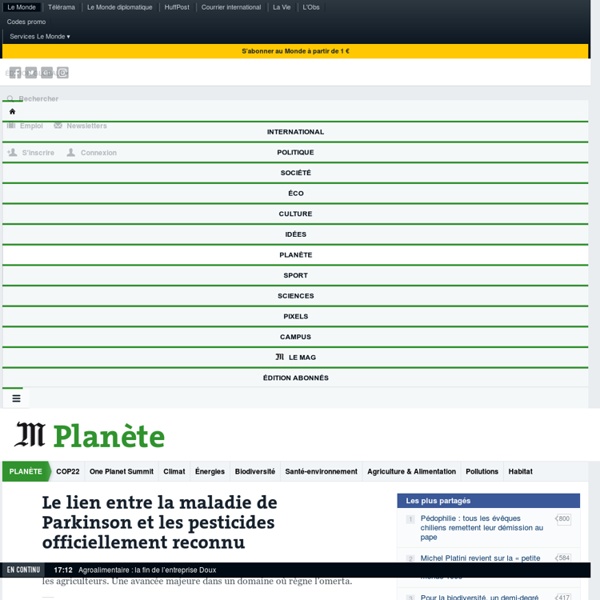 Pesticide in frozen food sickens hundreds in Japan Some of the food that’s been sold out of freezers in Japan recently has had a strange smell to it — a fishy odor that has nothing to do with seafood. It’s the smell of malathion, an insecticide. More than 1,000 people have been sickened so far by eating frozen foods laced with the pesticide, according to some media reports.

Catastrophic Pipeline Ruptures Still Too Big a Risk for Enbridge, Report Warns Home Page Title: Report: Pipeline Ruptures Still Big Risk for Enbridge A "complete breakdown of safety" in 2010 has not been sufficiently addressed, a neglect that may spell trouble for its other aging lines, the report says. Spain Study Confirms Cannabis Oil Cures Cancer Without Side Effects By Mark Sircus Ac., OMD The medical science is strongly in favor of THC laden hemp oil as a primary cancer therapy, not just in a supportive role to control the side effects of chemotherapy. The International Medical Verities Association is putting hemp oil on its cancer protocol. It is a prioritized protocol list whose top five items are magnesium chloride, iodine, selenium, Alpha Lipoic Acid and sodium bicarbonate. It makes perfect sense to drop hemp oil right into the middle of this nutritional crossfire of anti cancer medicines, which are all available without prescription. Hemp oil has long been recognized as one of the most versatile and beneficial substances known to man.

Chemical Agriculture on the Attack, Again Keeping politicians on message can sometimes be difficult. That also holds true of corporate chiefs and movie stars. Even the most seasoned, media-savvy folks veer off their talking points on occasion. But that's not the case with the pesticide industry and its clientele. In the decades since agriculture's embrace of chemical pesticides revolutionized farming, the companies that make bug- and weed-killers have never acknowledged that their products can harm human health. Despite the proliferation of careful studies revealing troubling connections between pesticides and serious health problems, spokesmen for the pesticide industry and conventional agriculture have stuck to their talking points with unshakeable discipline, attacking anyone who raises concerns about the effects of these chemicals on health and the environment.

Sunshine slows weight gain, study finds Exposure to moderate amounts of sunshine may slow the development of obesity and diabetes, a study suggests. Scientists who looked at the effect of sunlight on mice say further research will be needed to confirm whether it has the same effect on people. UV light The researchers showed that shining UV light at overfed mice slowed their weight gain.