This section is just for random bits about bicycles, motorcycles and in general the automotive world including some various engineering feats and considerations to the mechanical world

440C. I often hear a lot of misconceptions about one of my favorite knife steels, 440C stainless steel, and I want to clear up a few of them. 440 stainless steel has gotten kind of a bad rap because a lot of factory knives use 440 stainless, sometimes called "surgical stainless". 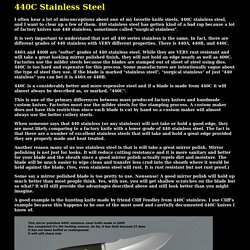 It is very important to understand that not all 440 series stainless is the same. In fact, there are different grades of 440 stainless with VERY different properties. There is 440A, 440B, and 440C. 440A and 440B are "softer" grades of 440 stainless steel. While they are VERY rust resistant and will take a great looking mirror polished finish, they will not hold an edge nearly as well as 400C. 440C is a considerably better and more expensive steel and if a blade is made from 440C it will almost always be described as, or marked, "440C".

This is one of the primary differences between mass produced factory knives and handmade custom knives. Will a New Glass Battery Accelerate the End of Oil? Electric car purchases have been on the rise lately, posting an estimated 60 percent growth rate last year. 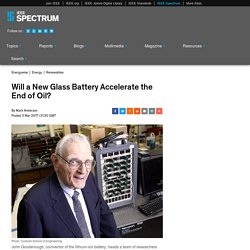 They’re poised for rapid adoption by 2022, when EVs are projected to cost the same as internal combustion cars. However, these estimates all presume the incumbent lithium-ion battery remains the go-to EV power source. So, when researchers this week at the University of Texas at Austin unveiled a new, promising lithium- or sodium-glass battery technology, it threatened to accelerate even rosy projections for battery-powered cars.

“I think we have the possibility of doing what we’ve been trying to do for the last 20 years,” says John Goodenough, coinventor of the now ubiquitous lithium-ion battery and emeritus professor at the Cockrell School of Engineering at the University of Texas, Austin. Phonon Lasers Make a More Practical Sound. Ever since the laser saw the light of day a half century ago, researchers have been playing with the idea that something similar could be created using sound rather than light. 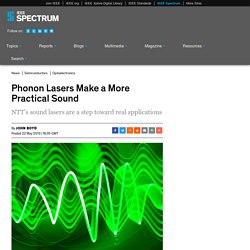 But the concept made little headway in the ensuing decades. In 2009, the situation changed abruptly, when scientists at Caltech and the University of Nottingham, in England, using tiny drums and stacked semiconductors, respectively, employed conventional lasers to stimulate or probe the emission of a stream of “phonons”—the quasiparticles of sound—proving that phonon lasers, or “sasers,” were indeed a sound idea. Now researchers at NTT Basic Research Laboratories, in Japan, have taken a significant step forward by fabricating an entirely electromechanical resonator on a chip that also eliminates the need for the lasers that previous devices required. The word laser is an acronym for “light amplification by stimulated emission of radiation.” Other phonon laser researchers have been improving their devices, too.

BangShift.com Best Of 2015: It's A Turbocharged, EcoTech-Powered, Mid-Engined Chevrolet Cavalier Convertible With Right-Hand Drive, And It's Wicked! - BangShift.com. (Photos: BWC Fabrications) (Note: Easily the wildest car I’ve laid eyes on this year, this Cavalier looks like something I would’ve drawn in the middle of math class in junior high. 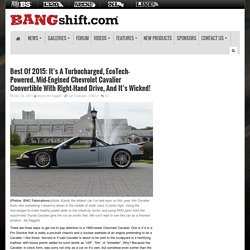 Using the four-banger to make healthy power adds to the creativity factor, and using RHD parts from the export-only Toyota Cavalier give the car an exotic feel. Kadenacy & Sonic Flow – Technology Elevated. Kadenacy explains the acoustic phenomena being developed for the Sonic Flow engine like this: “All the foregoing difficulties and disadvantages inherent in prior installations are overcome or avoided in the power plant of the invention, in which a two cycle internal combustion engine is employed and the engine is operated to utilize the phenomena of explosive exhaust and implosive inlet, the use of such phenomena being fully explained in my co-pending application, Serial No. 588,189, entitled Power Plant” and filed on the same date as this application. 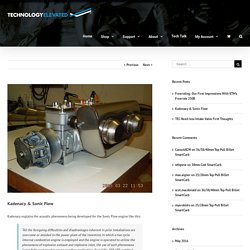 Reference may also be had to my prior U. S. A Brilliant View Into Aerodynamics. There’s probably nothing more underestimated in a car’s development and performance than actual aerodynamics. 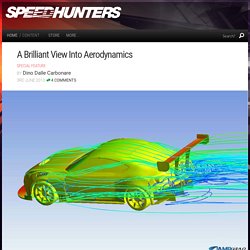 What was born as nothing more than a black art has slowly and very successfully turned into an ever-evolving technology that has the potential to improve pretty much every single aspect’s of a car’s capabilities, not to mention make the difference between winning or losing a race in a lot of forms of motorsports. However, successfully understanding and harnessing this interaction between a car and the airflow that surrounds it at any given speed is probably one of the most misunderstood modern-day sciences, explaining why many manufacturers have made huge investments in wind tunnels and super computers to virtually process an outstanding amount of data. Varying opinions and assumptions, not to mention embellished figures, there to serve as marketing tools rather than anything else, have all contributed into making aero quite confusing. 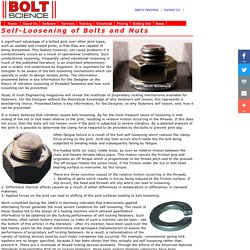 This feature however, can cause problems if it unintentionally occurs as a result of operational conditions. Perfect Engine Sealing Starts With Proper Head Bolt Use - Engine Builder Magazine. How important are the various fasteners in an engine? 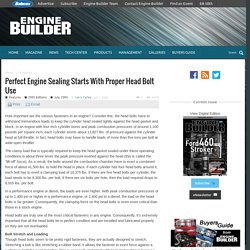 Consider this: the head bolts have to withstand tremendous loads to keep the cylinder head sealed tightly against the head gasket and block. In an engine with four inch cylinder bores and peak combustion pressures of around 1,100 pounds per square inch, each cylinder exerts about 13,827 lbs. of pressure against the cylinder head at full throttle. In fact, head bolts may have to handle loads of more than five tons per bolt at wide-open throttle!

The clamp load that is typically required to keep the head gasket sealed under these operating conditions is about three times the peak pressure exerted against the head (this is called the "lift-off" force). As a result, the bolts around the combustion chamber have to exert a combined force of about 41,500 lbs. to hold the head in place. NS300L Home Page. The Charis Culture. Back in September we attended the nurotag homecoming show and met a very interesting dude. 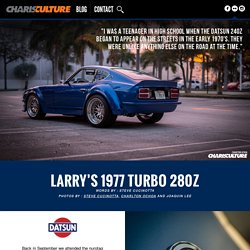 His name was Larry. He had this immaculate Blue 280z parked at the farthest end of the parking lot outside of the MACC. It was in the shadow of some massive trucks and not very easy to spot. I spotted a sliver of it peeking through the parked cars so Joaquin and I headed over to get a closer look. We were awestruck to say the least. Comparison of ACZPs. Simple Corrosion/Oxidation vs. 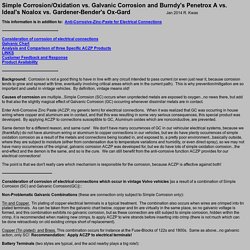 Galvanic Corrosion and Burndy's Penetrox A vs. Ideal's Noalox vs. Gardener-Bender's Ox-Gard Jan 2014 R. Foam Filling the chassis...... - Page 3. Originally Posted by CharWhen you did behind the B pillar and the cross bar, was the tape enough to hold it back? Behind the B-pillar we *probably* could have just used a sh*t-load of Gorilla tape.The cross bar was no problems with Gorilla tape.The US Composites 8 lb foam will find any openings you leave. As it catalyzes, it heats up and expands like crazy.Wipe off the surface being taped, in particular on the really dirty spots like under your frame rails. Get a reasonably clean surface for the Gorilla tape to adhere. Motoring, cars, driving, and traffic: Chassis Stiffening. These days we read a lot of about how car manufacturers are stiffening the chassis for every new model that they develop.

Each replacement model seems to be increasing chassis stiffness by 30% to 50% on the previous model. What this basically means is to improve structural rigidity of the car. This has a direct impact on handling and safety. With reduced chassis flex the car will have better cornering stability and also better crash protection for the driver and occupants. You may also notice that some car manufacturers seem to have cars that appear a lot stiffen in construction than others. Untitled. Sit back and think about it: Wrist Pin Clips and teflon buttons. We call them gudgeon pins here, but anyway...

They need to be held in the piston, or they will walk out the end. The four most common methods of retaining them are: 1. Snap rings, or "stock circlips. " These are kind of like a ring with the ends twisted in. 路上の出逢い. Polyurethane bushing a bad idea for the rear camber arms. - MY350Z.COM Forums. Just wanted to update everyone on this... Initially my thought on seeing the damage was that it would be due to the urethane bushings on the knuckle. Urethane bushings allow a pivoting motion, but does not really permit a twisting motion; some amount of twisting motion is needed as the suspension arms move through its different arcs.

As the urethane bushing "binds" up, it will over time fatigue or bend the control arms. For example, on the 240SX and 300ZX, they have been known to damage front lower control arms and rear traction rods. However, I realized the next day that there was a more likely explanation for that exact damage seen on the OP's control arms, we believe now that the damage is from his dyno shop strapping the car down to the dyno using the camber arms. Destroyed Powerflex Front Control Arm Bushing. Quote: *should* and *are* two very different things. i can guarantee that it doesnt rotate around a single axis, especially when caster comes into play Group-N will provide what youre looking for IMO. and comes with the bonus of no maintenance needed. Задняя подвеска, ремонт…замена сайлентов во всех рычагах. Rear Trailing Arm Bushings. Just Say No to polyurethane bushings - Page 2. Quote: Just Say No to polyurethane bushings. My experiences with Poly bushings <info post>