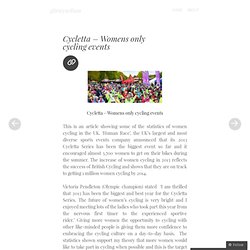 ‘Human Race’, the UK’s largest and most diverse sports events company announced that its 2013 Cycletta Series has been the biggest event so far and it encouraged almost 3,700 women to get on their bikes during the summer. Urban Cycling Show Spin London hits Brick Lane. Bike shows have recently become more appealing to the public. 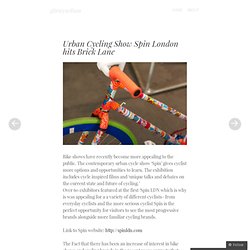 The contemporary urban cycle show ‘Spin’ gives cyclist more options and opportunities to learn. The exhibition includes cycle inspired films and ‘unique talks and debates on the current state and future of cycling.’ Over 60 exhibitors featured at the first ‘Spin LDN which is why is was appealing for a a variety of different cyclists- from everyday cyclists and the more serious cyclist Spin is the perfect opportunity for visitors to see the most progressive brands alongside more familiar cycling brands. Link to Spin website: Cycle-to-work-guidance. Commuting / There's nothing like cycling to work. Sports Equipment - 2013 - Executive Summary.

Renovated Rijksmuseum lets cyclists ride through the building. Amsterdam's Rijksmuseum reopens today, and while many visitors will appreciate the architectural renovation and old masters on show, others might be more excited about being able to ride their bike through the museum again. 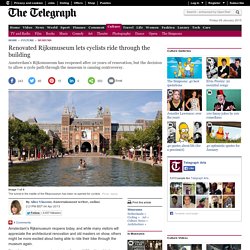 The 19th-century museum has had a 10-year, €375 million (£318 million) renovation, which notably includes the reinstatement of the Rijksmuseum's pride and joy: Rembrandt's 17th century painting, The Night Watch. Rembrandt painting The Night Watch has been reinstated behind stained glass windows. To Encourage Biking, Cities Forget About Helmets. So I bought a day pass online for about $2, entered my login information at one of the hundreds of docking stations that are scattered every few blocks around the city and selected one of Vélib’s nearly 20,000 stodgy gray bikes, with their basic gears, upright handlebars and practical baskets. 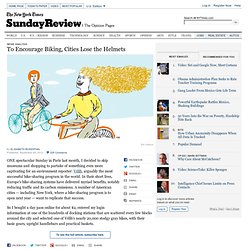 Then I did something extraordinary, something I’ve not done in a quarter-century of regular bike riding in the United States: I rode off without a helmet. I rode all day at a modest clip, on both sides of the Seine, in the Latin Quarter, past the Louvre and along the Champs-Élysées, feeling exhilarated, not fearful. And I had tons of bareheaded bicycling company amid the Parisian traffic. One common denominator of successful bike programs around the world — from Paris to Barcelona to Guangzhou — is that almost no one wears a helmet, and there is no pressure to do so. On the other hand, many researchers say, if you force or pressure people to wear helmets, you discourage them from riding bicycles.

Cycling on London streets: tackling my Alpe d'Huez. 'Think big' shouts David Eales as I wobble ungracefully away from him, down a narrow, car-lined road. 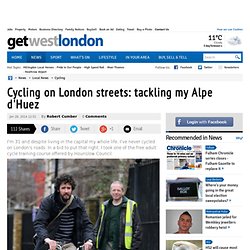 I feel like an overgrown child from a heartwarming movie scene, except I'm not making my bid for independence down a gently rolling park hill but out onto the mean streets of London. Strictly speaking they're the much less scary back streets of Brentford, but for someone who has never cycled on the capital's roads they're plenty intimidating.

Barclays to end sponsorship of Boris Johnson's London bike hire scheme. Barclays deal attracted scrutiny over the manner of its awarding and the small amount of money obtained for such widespread branding across the capital. 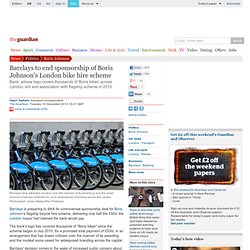 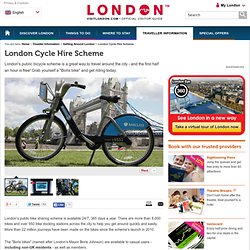 There are more than 8,000 bikes and over 550 bike docking stations across the city to help you get around quickly and easily. More than 22 million journeys have been made on the bikes since the scheme's launch in 2010. The "Boris bikes" (named after London's Mayor Boris Johnson) are available to casual users - including non-UK residents - as well as members. Getting started is easy – simply hire a bike, ride it where you like, then return it to any of the hundreds of docking stations across the city. Bikes can be hired by the day, week or year – based on a small registration fee (£2 to register for a 24 hour period – you will need a debit or credit card to pay). 'Boris bikes' scheme imposes 100% price rise. Police issue safety advice and fines at Hounslow's cycle danger spots.

POLICE are issuing safety advice at some of Hounslow’s most dangerous junctions this week following a spate of cyclist deaths across the capital. 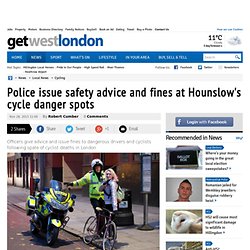 Officers have been stationed at the junction of Bath Road and Vicarage Farm Road, in Hounslow West; Apex Corner, in Hanworth; and Hogarth roundabout, in Chiswick. They offered safety tips to cyclists, drivers and pedestrians, and handed out on-the-spot fines for offences including driving while using a mobile and cycling without lights. A total of eight officers were stationed at the junctions during morning and evening rush hours from Monday (November 25) as part of the London-wide Operation Safeway, which was launched after six cyclists died on the capital’s roads in a fortnight.

The initiative is due to continue until Christmas Eve. “Hounslow has low numbers of serious cycling injuries and deaths but we’re taking positive action to ensure all road users know how to stay safe and help others do the same,” he added. * wear bright clothing. London to get network of bike routes as part of £913m plan for safer cycling. National Rail Enquiries app gets a cycling-info upgrade – BikeBiz. 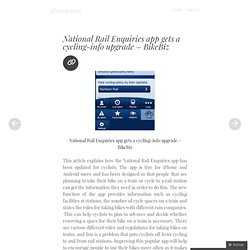 The app is free for iPhone and Android users and has been designed so that people that are planning to take their bike on a train or cycle to a rail station can get the information they need in order to do this. Understanding Walking and Cycling. A recent research project, Understanding Walking and Cycling, has published the key findings of its examination of the factors influencing everyday travel decisions and proposes a series of policy measures to increase levels of walking and cycling for short trips in urban areas. 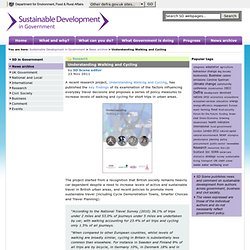 The project started from a recognition that British society remains heavily car dependent despite a need to increase levels of active and sustainable travel in British urban areas, and recent policies to promote more sustainable travel (including Cycle Demonstration Towns, Smarter Choices and Travel Planning): “According to the National Travel Survey (2010) 36.1% of trips under 2 miles and 53.0% of journeys under 5 miles are undertaken by car, with walking accounting for 23.4% of all trips and cycling only 1.5% of all journeys.

“When compared to other European countries, whilst levels of walking are broadly similar, cycling in Britain is substantially less common than elsewhere.