Martin Key sur Twitter : "#cycling experts in Malmö investing €18 per person per year to increase journeys by bike #choosecycling. Brent Toderian sur Twitter : ""Most city planners now see the era of the car’s urban supremacy as a brief, misguided phase in city culture." @NYMag. Bicycle The Film » Contact. If you would like to discuss any aspect of “Bicycle”, please contact Pip or Sarah, as below. 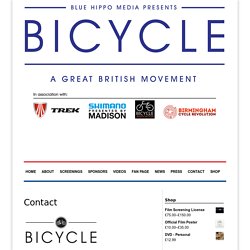 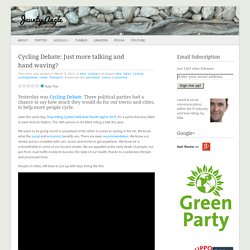 Three political parties had a chance to say how much they would do for our towns and cities, to help more people cycle. Later the same day, Stop Killing Cyclists held their fourth vigil in 2015, for a cyclist that was killed in near Victoria Station. The 18th person to be killed riding a bike this year. London taxi boss Steve McNamara: Cyclists are the 'Isis of London' The head of the largest taxi driver organisation in London has branded cyclist the ‘Isis’ of the capital. 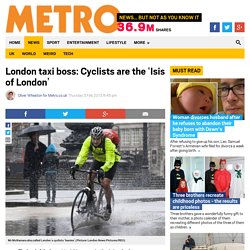 Steve McNamara, the general secretary of the Licensed Taxi Drivers Association (LTDA), also dubbed cyclists ‘loonies’. His comments came in response to the new ‘crossrail’ super cycle highways that Boris Johnson recently gave the go ahead to throughout London. Speaking to LBC, Mr McNamara said: ‘The loonies out there in the cycling world, they’re almost the sort of Isis of London. ‘Their views and their politics – if you are not with them, and we are with the majority of it, then nothing is too bad for you.’ Karl Roche sur Twitter : "The importance of functional threshold #power for #cycling. - My.socialtoaster. There’s little doubt that training with power is much more complex than training with heart rate. 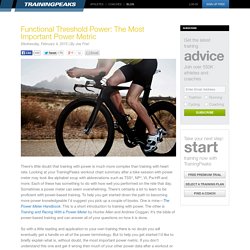 Looking at your TrainingPeaks workout chart summary after a bike session with power meter may look like alphabet soup with abbreviations such as TSS®, NP®, VI, Pw:HR and more. Each of these has something to do with how well you performed on the ride that day. Sometimes a power meter can seem overwhelming. Shimano bring out wind muffler for sports camera. Still no editing software but Shimano are bringing out more hardware for the Sport Camera. 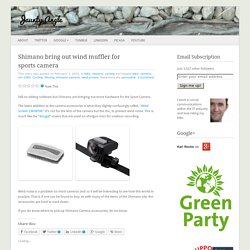 The latest addition to the camera accessories is what they slightly confusingly called, “Wind Screen CM-MT06.” It’s not for the lens of the camera but the mic, to prevent wind noise. This is much like the “dougal” covers that are used on shotgun mics for outdoor recording. Wind noise is a problem on most cameras and so it will be interesting to see how this works in practice. YouTube editor, you’re twisting my melons man. Wallington cycles sur Twitter : "Just in, @GiantUK defy advanced pro 1, full hydraulic disc brakes 22 speed carbon fibre frame £2599 #cycling #road. Karl Roche sur Twitter : "The 8 Best #Strength #Exercises for #Cycling - My.socialtoaster. My.socialtoaster. I would love to build a huge aerobic base the old fashioned way, but I love my wife and I'm pretty fond of my kids and my career. 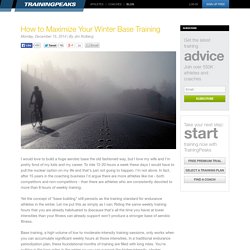 To ride 12-20 hours a week these days I would have to pull the nuclear option on my life and that's just not going to happen. I'm not alone. In fact, after 15 years in the coaching business I'd argue there are more athletes like me - both competitors and non-competitors - than there are athletes who are consistently devoted to more than 8 hours of weekly training. Yet the concept of "base building" still persists as the training standard for endurance athletes in the winter.

Let me put this as simply as I can: Riding the same weekly training hours that you are already habituated to (because that's all the time you have) at lower intensities than your fitness can already support won't produce a stronger base of aerobic fitness. The alternative to Traditional Base Building for Time-crunched Athletes The goal is the same: we want greater mitochondrial density. London Borough of Sutton - Sutton Transport Planning. Space for Cycling – London Cycling Campaign. Road.cc sur Twitter : "An obscured windscreen is a potential killer warns the AA #cycling.

An obscured windscreen is a potential killer warns the AA. AA car (picture credit The AA).jpg The AA president has issued a seasonal warning urging drivers not to set off looking through a snow slit or peering through smears of road dirt. 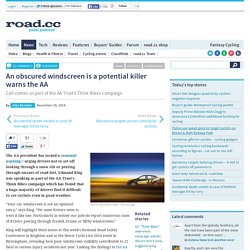 Edmund King was speaking as part of the AA Trust’s Think Bikes campaign which has found that a huge majority of drivers find it difficult to see cyclists even in good weather. "Your car windscreen is not an optional extra,” says King. Twitter. Second incident in New Forest town in two days leaves cyclist seriously injured. Broken bike (CC licensed image by garryknight, www.flickr.com) A day after three cyclists were seriously injured in the New Forest following a collision with an Aston Martin car, another has been taken to hospital this afternoon, with serious injuries after bing hit by a car towing a caravan. 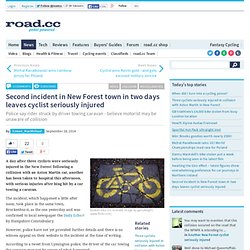 The incident, which happened a little after noon, took place in the same town, Brockenhurst, as the one yesterday and was confirmed to local newspaper the Daily Echo by Hampshire Constabulary. However, police have not yet provided further details and there is no witness appeal on their website to the incident at the time of writing. According to a tweet from Lymington police, the driver of the car towing the caravan may not be aware of what happened. Stan, SpecialEyedLez sur Twitter : "Feel shit after work? A quiet ride is sometimes all you need to sort your head out #cycling.

Witter / ? Teaching a child to ride. Ste_P : #Cyclists warning sticker now ... Witter / ? Share the love on the road with a stay awesome sticker. We've seen a lot of negativity in recent times towards cyclists. 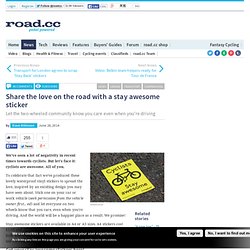 But let's face it: cyclists are awesome. All of you. To celebrate that fact we've produced these lovely waterproof vinyl stickers to spread the love, inspired by an exisiting design you may have seen about. Stick one on your car or work vehicle (seek permission from the vehicle owner first... ed) and let everyone on two wheels know that you care, even when you're driving. And the world will be a happier place as a result. Stay awesome stickers are available in A4 or A5 sizes. A4 stickers are in stock now, A5 ones will arrive next week.

Quietways and the long road to change for cyclists. 24 June 2014Last updated at 13:19 ET Cyclists in Camden already benefit from more attractive side streets So far we have not seen big changes for cyclists, but in the next few months we might start to. 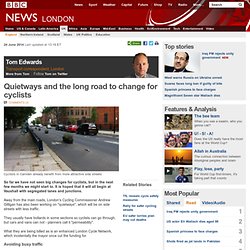 It is hoped that it will all begin at Vauxhall with segregated lanes and junctions. Away from the main roads, London's Cycling Commissioner Andrew Gilligan has also been working on "quietways", which will be on side streets with less traffic. Ragtag : Beautiful out there today. VeloVoices » Podcast (podcast) Daffy_Green : @londoncyclist the best and... RideSutton. Instagram. Instagram. Instagram. Camden to get London's first left hook preventing separated junction. Left hook collisions — where a motor vehicle turning left hits a cyclist — were involved in nine of London’s fourteen cycling deaths in 2013. Now the borough of Camden is to get what's believed to be London’s first intersection specifically designed to make a left hook collision impossible. Known as Cobden Junction, the intersection of Crowndale Road, Eversholt Road and Camden High Street is currently a mess of traffic lights and one-way streets with no provision for cycling. Or, in other words, a typical London intersection.

The dreaded left hook A proposal from Camden Cyclists — the local branch of the London Cycling Campaign — would replace the current junction with one that uses kerbs between lanes and cycle-specific lights to eliminate the chance of a left hook. According to Camden Cyclists coordinator Jean Dollimore, that means the modification will definitely go ahead. MTBTR : #Cycling in #London: unloading... Greater London Authority. Boris Johnson says he'd back ban on cyclists wearing earphones. Boris Johnson on CS2 extension Nov 2013 (source MayorofLondon on Twitter) Mayor of London Boris Johnson has said that he would support a ban on bike riders in London wearing earphones – leading one commentator to suggest that his credibility with cyclists “is evaporating.”

He described earphones used by people to listen to music while riding bikes as “and absolute scourge,” and said he would be in favour of banning them. Boris Johnson paying close attention to the traffic Mr Johnson continued: “Call me illiberal, but it makes me absolutely terrified to see them bowling along unable to hear the traffic. It’s an issue Mr Johnson has addressed before. Euskaltel Euskadi team confirms Alonso deal is off and team will be dissolved. Following reports earlier today that the expected takeover of the current Euskaltel Euskadi team by Formula One driver Fernando Alonso might not go ahead, the team has confirmed that this is indeed the case. It means that the riders and others who had expected to be part of the new setup have been left without jobs at a very crucial point of the season.

“Euskaltel representatives can not hide their disappointment at the outcome of the negotiation process. It is a sad day for Euskaltel and the team, after the expectations generated by the agreement in principle reached in late August and public statements made at the time by Fernando Alonso and his representatives,” the team said in a statement. It added that a road map which had laid out terms of the agreement had not been completed, despite efforts to do so. The driver had previously indicated that he wants the former pro and current Oakley representative Kiko Garcia to head the project, and to be able to appoint his own staff. Richard Ballantine RIP. City Cycling Cycling author and advocate Richard Ballantine passed away yesterday (29 May 2013). He was a hugely influential figure in the cycling world, best known for his book: Richard's Bicycle Book. Londonneur : A dutch station? Nope....