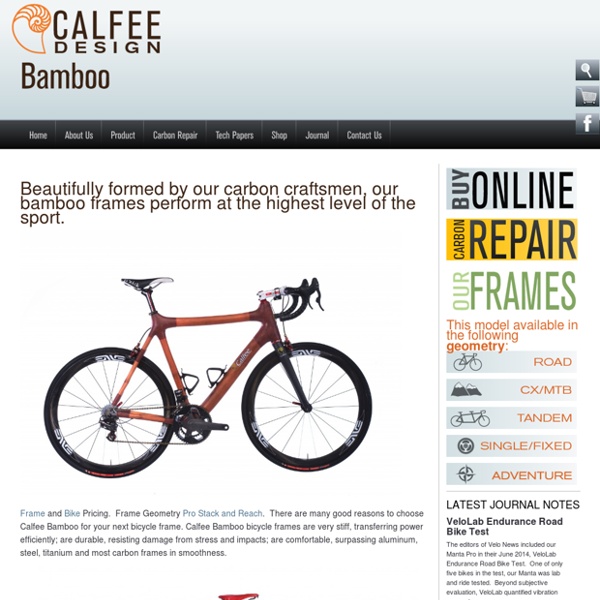 Frame and Bike Pricing. Frame Geometry Pro Stack and Reach. There are many good reasons to choose Calfee Bamboo for your next bicycle frame. Calfee Bamboo bicycle frames are very stiff, transferring power efficiently; are durable, resisting damage from stress and impacts; are comfortable, surpassing aluminum, steel, titanium and most carbon frames in smoothness. Read this build detail about the very special bamboo tandem, pictured above. Each of our bamboo frames requires over 40 hours of labor to build. Our frame is made from bamboo that has been treated to prevent splitting. We offer our bamboo bicycle frames in all frame styles and geometries. While they have long been popular with enthusiastic racers and endurance road riders, owing to our bamboo’s amazing strength they are increasingly seen in Cyclocross, Mountain and Touring dress. Calfee Bamboo bikes have won awards for Best Road Bike, Best Off-Road Bike and Peoples’ Choice Award at the North American Handmade Bicycle Show. Related:  Bikes

The Bicycle Academy : Cycle frame building school | Make a bike. Make a difference. Learn how to build a bicycle frame, keep the skills and give your first bike to someone who really needs it. We give people the lessons, skills and kit to design and make their own bikes. But there’s a big difference. We’ve based our TBA Africa bike on the Buffalo Bike designed specifically for people in Africa. We know frame-building classes aren’t cheap and if you don’t have a workshop nearby with all the kit it’ll be hard for you to make another bike.

Open Access Maps at NYPL The Lionel Pincus & Princess Firyal Map Division is very proud to announce the release of more than 20,000 cartographic works as high resolution downloads. We believe these maps have no known US copyright restrictions.* To the extent that some jurisdictions grant NYPL an additional copyright in the digital reproductions of these maps, NYPL is distributing these images under a Creative Commons CC0 1.0 Universal Public Domain Dedication. The maps can be viewed through the New York Public Library’s Digital Collections page, and downloaded (!) It means you can have the maps, all of them if you want, for free, in high resolution. Though not required, if you’d like to credit the New York Public Library, please use the following text "From The Lionel Pincus & Princess Firyal Map Division, The New York Public Library.” *The maps may be subject to rights of privacy, rights of publicity and other restrictions.

Home | Panda Bicycles The secret history of 19th century cyclists | Environment It is not easy explaining to family and friends why you are spending a fairly considerable amount of money and a year of your life researching the social impact of the bicycle on late19th century British society. As an uncle of mine, who is himself a keen cyclist, once helpfully asked, “Why does anyone need to know anything about that?” It can be a difficult question to answer. As with most people involved in academic research, there are many personal reasons why I’m doing it. Having such experiences meant that when I stumbled across cycling sources from the 1890s, it was easy for me to find them fascinating, and above all else, easy to relate to. The 100 and something years separating myself from those I was researching disappeared when reading accounts like this: To find oneself miles from anywhere, with the mossiest of banks inviting a loll, a smoke and a quiet chat with congenial clubmates – to experience these things is to taste the real sweets of the cyclists’ existence.

Capitalism is making way for the age of free | Jeremy Rifkin A 3-D printer producing a canal house in the Netherlands. A legion of prosumers is producing and sharing 3D printed products at near-zero marginal cost on the collaborative commons. Photograph: Peter Dejong/AP Karl Marx spent a lifetime trying to uncover what he suspected were the deep contradictions that drove the capitalist system forward but that would one day lead to its demise. In a capitalist market, governed by the invisible hand of supply and demand, sellers are constantly searching for new technologies to increase productivity, allowing them to reduce the costs of producing their goods and services so they can sell them cheaper than their competitors, win over consumers and secure sufficient profit for their investors. Over the past decade millions of consumers have become prosumers, producing and sharing music, videos, news, and knowledge at near-zero marginal cost and nearly for free, shrinking revenues in the music, newspaper and book-publishing industries.

Bamboo bikes, local materials for innovative solutions The Victorian Cyclist | A history blog on the joys and perils of cycling in Victorian Britain Tomorrow's Apps Will Come From Brilliant (And Risky) Bitcoin Code | Wired Opinion For many, bitcoin — the distributed, worldwide, decentralized crypto-currency — is all about money … or, as recent events have shown, about who invented it. Yet the actual innovation brought about by bitcoin is not the currency itself but the platform, which is commonly referred to as the “blockchain” — a distributed cryptographic ledger shared amongst all nodes participating in the network, over which every successfully performed transaction is recorded. And the blockchain is not limited to monetary applications. Borrowing from the same ideas (though not using the actual peer-to-peer network bitcoin runs on), a variety of new applications have adapted the bitcoin protocol to fulfill different purposes: Namecoin for distributed domain name management; Bitmessage and Twister for asynchronous communication; and, more recently, Ethereum (released only a month ago). The Bitcoin Protocol Is More ‘Cloud’ Than ‘P2P’ So What Are the Challenges? That’s the revolutionary feature of Ethereum.

Road Bikes | Bamboosero "I had a beautiful 25 mile ride this morning before church services (I am a Lutheran pastor). It is smooth, comfortable and quick--average speed 17.9 mph. My average speed is up about 2 mph over the Madone. Robert Jones "First impressions are good - stiffness will not be a problem as I actually found it very stiff compared to my current bikes. Brendan Millar Distance: 4,368.9miles (7,281.5km) Bamboo bike1 record (before accident): 2,979.3miles, 2010/9/10-10/28 Bamboo bike2 record (after accident): 1,389.6miles, 2010/11/11-12/6 Start/Goal: from Bamboosero in Santa Cruz, CA to Bamboobikestudio in Brooklyn, NYC "The bamboo bike rides really nicely-stiff like aluminum, probably due to the oversize tubes, er, sticks, but more muted like a nice steel frame. Paul Altenhofen (Calfee Bamboo Bike January 2008) "[My] initial concerns before riding the bike would have been the geometry, balance, and alignment of an imperfect material of non man made origin. Braxton Dutton

Is It O.K. to Kill Cyclists? Photo SAN FRANCISCO — EVERYBODY who knows me knows that I love cycling and that I’m also completely freaked out by it. I got into the sport for middle-aged reasons: fat; creaky knees; the delusional vanity of tight shorts. Registering for a triathlon, I took my first ride in decades. I made it home alive and bought a stationary bike trainer and workout DVDs with the ex-pro Robbie Ventura guiding virtual rides on Wisconsin farm roads, so that I could sweat safely in my California basement. The anecdotes mounted: my wife’s childhood friend was cycling with Mom and Dad when a city truck killed her; two of my father’s law partners, maimed. In stories where the driver had been cited, the penalty’s meagerness defied belief, like the teenager in 2011 who drove into the 49-year-old cyclist John Przychodzen from behind on a road just outside Seattle, running over and killing him. You don’t have to be a lefty pinko cycling activist to find something weird about that. Take Sgt.