Bez: UK Cycling Infrastructure Guidelines. The main focus of the Beyond the Kerb blog has always been the aspect of road use in general which I find—literally, in all too many cases—morbidly fascinating: people’s attitudes, which are manifested not just in people’s personal use of the roads, but also in the media and, most concerningly of all, law. 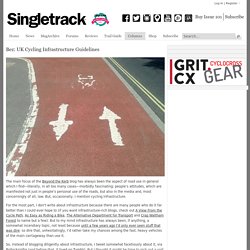 But, occasionally, I mention cycling infrastructure. For the most part, I don’t write about infrastructure because there are many people who do it far better than I could ever hope to (if you want infrastructure-rich blogs, check out A View From the Cycle Path, As Easy as Riding a Bike, The Alternative Department for Transport and Crap Waltham Forest to name but a few). But to my mind infrastructure has always been, if anything, a somewhat incendiary topic, not least because until a few years ago I’d only ever seen stuff that was dire: so dire that, unhesitatingly, I’d rather take my chances among the fast, heavy vehicles of the main carriageway than use it. 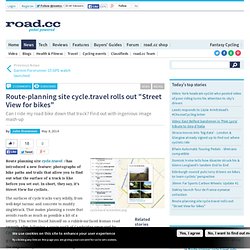 In short, they say, it's Street View for cyclists. The surfaces of cycle tracks vary wildly, from well-kept tarmac and concrete to muddy singletrack. That makes planning a route that avoids roads as much as possible a bit of a lottery. This writer found himself on a rubble-surfaced Roman road recently after following a route south of Cambridge generated by CycleStreets. Vole O'Speed. Re-making the world, one revolution at a time. Prudential Ride London - National Osteoporosis Society. Cycle 100 miles through London on traffic-free roads and help us defeat osteoporosis. 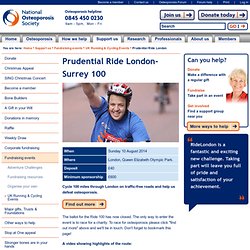 Find out more The ballot for the Ride 100 has now closed. The only way to enter the event is to race for a charity. To race for osteoporosis please click "find out more" above and we'll be in touch. Don't forget to bookmark this page! A video showing highlights of the route: Join 20,000 other cyclists and ride the route made famous by the London 2012 Olympic Road Race.

English/French Bicycle Dictionary. Spectacular Zoetermeer Cycle Bridge. Never before was a picture re-tweeted, discussed and re-published so often as the one I took last Friday of the new cycle bridge in Zoetermeer near The Hague. 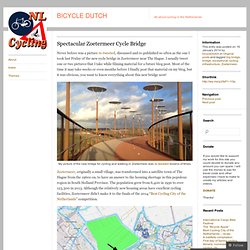 I usually tweet one or two pictures that I take while filming material for a future blog post. Most of the time it may take weeks or even months before I finally post that material on my blog, but it was obvious, you want to know everything about this new bridge now! Road Danger Reduction Forum. Study Shows Boris Bikes Are Good For You. ‘Boris Bikes’ were launched in 2010 They’ve been at the centre of several debates around funding, road behaviour and safety, but new research published today has shown that the health benefits to those who have used the London’s so-called Boris Bikes outweigh potential negative impacts from injuries and breathing in air pollution. 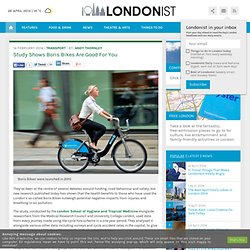 The study, conducted by the London School of Hygiene and Tropical Medicine alongside researchers from the Medical Research Council and University College London, used data from every journey made using the cycle hire scheme in a one year period. Cycle Lifestyle. Beginner’s Sportive training guide. Preparing and tackling a Fun distance sportive isn’t something to be scared of if you are new to cycling. 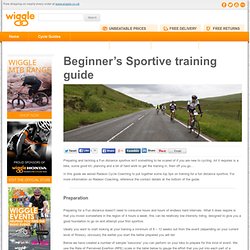 All it requires is a bike, some good kit, planning and a bit of hard work to get the training in, then off you go… In this guide we asked Radeon Cycle Coaching to put together some top tips on training for a fun distance sportive. Full details confirmed of Tour de France route through Essex. Chris Froome celebrates winning the 2013 Tour de France (picture copyright Simon Wilkinson:SWpix.com) Essex County Council has announced precise details of the route the Tour de France will follow on Monday 7 July when Stage 3 of cycling’s biggest race passes through the county on the way from Cambridge to London. 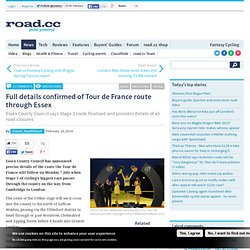 The route of the 159km stage will see it cross into the county to the north of Saffron Walden, passing via the Uttlesford district to head through or past Braintree, Chelmsford and Epping Forest before it heads into Greater London. The council says the route has now been finalised and has confirmed full details of the road closures that will be put in place, listed at the end of this article. Source: www.letour2014.stage3.com, hi resolution version here Essex County Councillor Ann Naylor, Cabinet Member for Public Health & Wellbeing, said: “We’re delighted to be able to say ‘bienvenue’ from Essex to a global audience of up to 3.5 billion people next July. Popular London cycing clubs and groups. Riding to get from A to B is usually not a group activity. 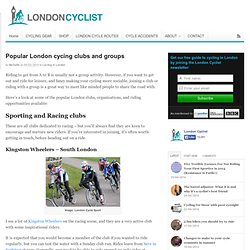 However, if you want to get out and ride for leisure, and fancy making your cycling more sociable, joining a club or riding with a group is a great way to meet like minded people to share the road with. Here’s a look at some of the popular London clubs, organisations, and riding opportunities available: Sporting and Racing clubs.