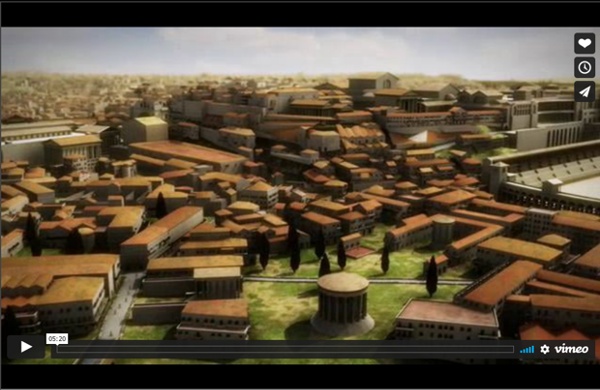 Virtual Heritage - Hadrian's Wall. Brunton Turret Virtual Heritage presents "Hadrian's Wall. Brunton Turret", second Virtual 3D Tour over the most interesting places along the Hadrian's Wall. Brunton Turret (also known as Turret 26B) is one of the best preserved turrets on the line of Hadrian's Wall. It is located east from Roman Cilurnum fort in Chesters, and west from the Onnum fort in Haltonchesters. It was built by soldiers from the ninth cohort of the Twentieth Victorious Valerian Legion (legio XX Valeria Victrix) in 123 AD. Rome city break guide Why go? Because Rome has been around for almost 3,000 years and yet carries all that weight of history with a dolce vita lightness of heart. This is a city where classical ruins and early Christian places of worship stand next to – or lie beneath – Renaissance palazzos and Baroque fountains. There are also great neighbourhood trattorias, quirky shops and a buzzing aperitivo scene. And because Rome is a city that combines the intimacy and human scale of a village with the cultural draws of a European metropolis.

Ancient Ceramic Cups Reveal Oldest Direct Evidence of Beer in Mesopotamia Archaeologists have long known beer was important in the ancient world, but mainly from writings and drawings—finding actual archaeological evidence of the fermented beverage has been a major challenge. But archaeologists have now employed a new technique to detect beer residues in nearly 2,500-year-old clay cups dug up in a site in northern Iraq. “What Elsa [Perruchini] has demonstrated is the chemical signature of fermentation in the vessels that also contains the chemical signatures consistent with barley,” says Claudia Glatz, a senior lecturer in archaeology at the University of Glasgow and a coauthor of a study published recently in the Journal of Archaeological Science. “Putting those together is the interpretation that this is barley beer.” The use of the technique will likely prove groundbreaking, giving archaeologists a chance to find beer at other excavations.

Ancient Rome Ancient Rome Image source: Roman soldier, courtesy Michael Coghlan (Flickr Commons) Ancient Romans build a city in North Afr... The ruins of the ancient city of Leptis Magna stand on the coast of Libya. Tollund Man By Susan K. Lewis Posted 02.07.06 NOVA He has become the face of Iron Age Europe. But in 1950, when men cutting peat near the village of Tollund, Denmark, stumbled upon him, they thought he was a modern murder victim. The police, aware of similar ancient bodies, contacted the Silkeborg Museum, and various specialists—archeologists, forensic scientists, radiologists, paleobotanists, even dentists—later studied his body. Here, learn about their findings and get an intimate view of the 2,400-year-old man.

Roman Ruins HD for iPad Not everyone can afford a quick jaunt around the Mediterranean to view the ruins of ancient Rome, but there's a new iPad app that offers a reasonably facsimile without the whole traveling the world aspect. Roman Ruins HD for iPad includes 1,500 images of ruins from all over the Mediterranean with massive pillars, detailed stonework, and more. It's not a small download, though. The app provides a variety of ways to dive into the images. The Roman Domus The Roman domus was much more than a place of dwelling for a Roman familia. It also served as a place of business and a religious center for worship. The size of a domus could range from a very small house to a luxurious mansion. In some cases, one domus took up an entire city-block, while more commonly, there were up to 8 domus per insula (city-block). All domus were free-standing structures. Some were constructed like modern-day townhouses with common walls between them, while others were detached.

The Rise and Fall of the Great Library of Alexandria: An Animated Introduction The demise of the Library of Alexandria has for centuries been cast as one of history’s greatest tragedies, an incalculable and senseless loss of ancient knowledge in an act of war. “Once the largest library in the ancient world,” writes Brian Haughton at Ancient History Encyclopedia, “containing works by the greatest thinkers and writers of antiquity, including Homer, Plato, Socrates and many more, the Library of Alexandria, northern Egypt, is popularly believed to have been destroyed in a huge fire around 2000 years ago and its voluminous works lost.” Ancient accounts, including those of Julius Caesar himself, that detail the multiple burnings of Alexandria seem to support this story. But in truth, the Library's disappearance has been a historical mystery, “perpetuated by the fact that no architectural remains or archaeological finds that can definitely be attributed to the ancient Library have ever been recovered.” As a cultural center, it was unusually democratic. Related Content:

Ancient Rome Back to History for Kids Ancient Rome was a powerful and important civilization that ruled much of Europe for nearly 1000 years. The culture of Ancient Rome was spread throughout Europe during its rule. As a result, Rome's culture still has an impact in the Western world today. The basis for much of Western culture comes from Ancient Rome, especially in areas such as government, engineering, architecture, language, and literature. The city of Rome is the capital of Italy today Map of Italy from the CIA World Factbook The Spanish Armada Publication date: 9th December 2010 by Jon Nichol Spanish Armada Beacon This is a highly interactive and stimulating simulation for years 3 and 4, and a very effective way of involving children in a range of issues.

Rome Reborn October, 2013 to August, 2014 High Tech Romans Exhibition Featuring Rome Reborn 2.2 Moves to Technopolis in Mechelen, Belgium High Tech Romans comes to Technopolis in Belgium, where upwards of 500,000 people are expected to see it. The exhibition features 32 interactive exhibits plus 20 showcases full of archaeological finds from the northern part of the Roman Empire. A video based on Rome Reborn 2.2 is shown in the orientation theater at the entrance.

Why Roman concrete still stands strong while modern version decays Their structures are still standing more than 1,500 years after the last centurion snuffed it: now the Romans’ secret of durable marine concrete has finally been cracked. The Roman recipe – a mix of volcanic ash, lime (calcium oxide), seawater and lumps of volcanic rock – held together piers, breakwaters and harbours. Moreover, in contrast to modern materials, the ancient water-based structures became stronger over time. Scientists say this is the result of seawater reacting with the volcanic material in the cement and creating new minerals that reinforced the concrete. “They spent a tremendous amount of work [on developing] this – they were very, very intelligent people,” said Marie Jackson, a geologist at the University of Utah and co-author of a study into Roman structures.

Climate Change Likely Iced Neanderthals Out Of Existence About 40,000 years ago, Neanderthals began disappearing from Europe, but exactly why they died out is a mystery. Some paleoarchaeologists have hypothesized it’s possible they simply couldn’t reproduce fast enough to keep up with the modern humans moving into Europe around that time. Others suggest modern humans slaughtered any bands of Neanderthal they came across or infected them with novel diseases. And some suggest that an environmental catastrophe, like a volcanic eruption in Europe, killed off many plants and animals. Researchers propose a new hypothesis this week that suggests our bipedal brethren weren’t equipped to stand a cold spell that accompanied two long periods of extended climate change that took place around the time the species began its decline, Malcolm Ritter at the Associated Press reports. To investigate the climate of central Europe during the age of Neanderthals, researchers looked at stalagmites in two Romanian caves.