Paris 26 Gigapixels - Interactive virtual tour of the most beaut 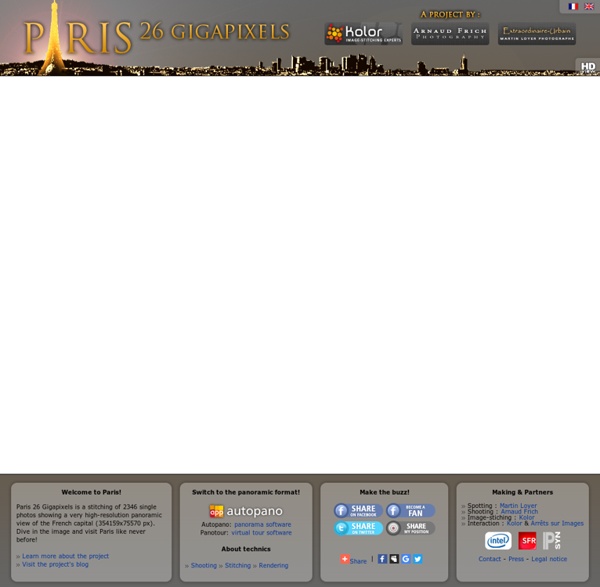 50 Award Winning Photographs top 10 lists picture pulitzer Ford Strikers Riot Photographer: Milton Brooks Year: 1942 Pulitzer Ford Strikers Riot was taken during the 1941 workers' strike at a Fordmanufacturing plant. The picture shows a worker beating a strikebreaker,who is trying to protect himself by pulling his coat over his head and face.Describing the circumstances surrounding the photo, Milton Brooks said, "Itook the picture quickly, hid the camera under my coat and ducked into thecrowd. A lot of people would have liked to wreck that picture."

Tokyo Tower Gigapixel Panorama About this photo This is a 150-gigapixel image shot from the top of the Tokyo Tower. It was shot in September 2012 with the kind assistance from the management of the Tokyo Tower. The trip to Tokyo was sponsored by Fujitsu Technology Solutions, and this panorama was rendered and edited on a Fujitsu Celsius R920 workstation. This image was shot with a Canon 7D digital SLR camera, with a 400mm telephoto lens.

The one-word key to teaching culture What is the point of teaching culture, anyway? Is it to get kids to realize that people are different? (They already do.) Is it to get them to try a new food? (Lengua, eww, gross. Does that have peanuts in it?) Healthy Baked Chicken Nuggets Chunks of all white meat chicken breasts coated in breadcrumbs and parmesan cheese then baked until golden. An easy chicken recipe your whole family will love. What can be more kid friendly than chicken nuggets, even the pickiest kids like them.

Photography: 15 Great Examples of the Rule of Thirds in Action The Rule of Thirds is a theory dictating how an image should be composed in order to create an aesthetically pleasing result. In all honesty, it’s more of a guideline than an actual rule. The principle involves splitting an image into nine equal parts.

WordPress Shortcodes Buttons Now you can create beautiful buttons on the fly using the button shortcode. Choose between various colors, styles and sizes. Boxes Content boxes are a great way to grab your visitor's eye and direct them to important content within a particular post or page. The Ultimate Custom Firmware For Any Camera Roundup With Magic Lantern recent 24P raw video hack I thought it may be a good idea to go over each of the big manufacturers and review are the options for anyone who is trying to use a custom Firmware on their camera Magic Lantern Magic Lantern (ML) is a Canon firmware toolbox specifically aiming for the video segment. It has recently got a huge buzz for enabling a Canon’s 5DmkII to shoot 24P RAW video. And while ML is not the oldest of custom firmware, it is definitely one of the more mature ones, with many movie makers using it on production setups. As with CHDK, it usually run from the memory card and does not require a firmware “flush.

Frenchified Mardi gras! by heather@lovebugsphotography.com | Mar 4, 2014 | Culture | 0 comments by Column Five Media. Explore more infographics like this one on the web’s largest information design community – Visually. Top 10 Kitchen Tricks That Speed Up Cooking So you’ve started beefing up your cooking skills, but the process is still a little tedious. Here are 10 surprising kitchen techniques that will save you a bunch of time — not to mention wow your friends. Please enable JavaScript to watch this video. Frame a Great Shot: Exploring Photo Composition Go beyond the expected in your next photo adventure! Join EyeEm’s Photographer of the Year, Porter Yates, for an inspiring one-hour composition class about capturing images that evoke intrigue — whether you're shooting digital, film, or Instagram. In this class, Porter critiques a selection of his own work from his travels to Asia, Africa and the Americas — sharing insights and tips on how to make a good photograph great:

How to design a Vectorial Mascot design in Illustrator  Choose your language / Elige tu idioma: Hi guys, I recorded the whole process in the making of Cheeky Monkey vectorial mascot design in Illustrator, there will be several videos and I will update this post frequently, so subscribing to my Youtube Channel, my Facebook page or my Twitter is a good idea to stay up to date. What is this tutorial about? The object of this tutorial is the cute vectorial character illustration for Cheeky Monkey Media, web development company from Canada, designed by commission some months ago. How to 3-D Print the Skeleton of a Living Animal The skeleton above was created by taking a CT scan of an anesthetized rat and sending the data to a 3-D printer. Similar life-size models of body parts from other animals or human patients could be used to train veterinary and medical students and to help surgeons prepare for difficult surgeries, the researchers say. The idea to print skeletons from CT scans came from Evan Doney, an engineering student working in the lab of Matthew Leevy, who runs the biological imaging facility at the University of Notre Dame. ”At first I didn’t really know what the killer app would be, I just knew it would be really cool,” Leevy said. But he began to see new possibilities after striking up a conversation with an ear, nose, and throat specialist during an office visit for a sinus problem.