My Son Sanctuary. My Son Sanctuary Between the 4th and 13th centuries a unique culture which owed its spiritual origins to Indian Hinduism developed on the coast of contemporary Viet Nam. 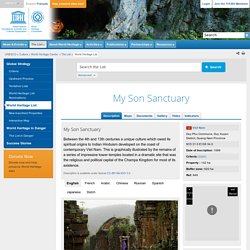 Source: UNESCO/ERI Description is available under license CC-BY-SA IGO 3.0 圣子修道院. The Great Wall. The Great Wall In c. 220 B.C., under Qin Shi Huang, sections of earlier fortifications were joined together to form a united defence system against invasions from the north. 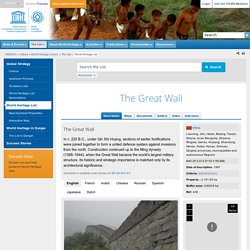 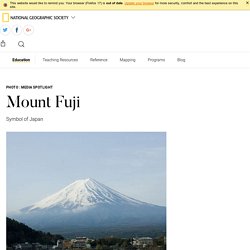 The mountain contributes to Japan's physical, cultural, and spiritual geography. Mount Fuji is the tallest mountain in Japan, standing at 3,776 meters (12,380 feet). It is an active volcano, sitting on a "triple junction" of tectonic activity: the Amurian plate (associated with the Eurasian tectonic plate), the Okhotsk plate (associated with the North American plate) and the Filipino plate all converge in the region beneath Mount Fuji. It is only 100 kilometers (62 miles) from Tokyo, Japan's capital and largest city. 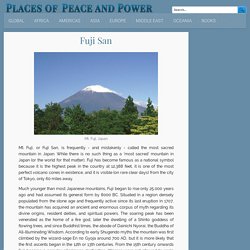 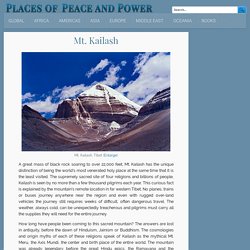 Kailash, Tibet (Enlarge) A great mass of black rock soaring to over 22,000 feet, Mt. Kailash has the unique distinction of being the world's most venerated holy place at the same time that it is the least visited. The supremely sacred site of four religions and billions of people, Kailash is seen by no more than a few thousand pilgrims each year. This curious fact is explained by the mountain's remote location in far western Tibet. How long have people been coming to this sacred mountain? Hindus believe Mt.Kailash to be the abode of Lord Shiva. Kailash is sacred to other religions as well. Mount Wollumbin. Mt. 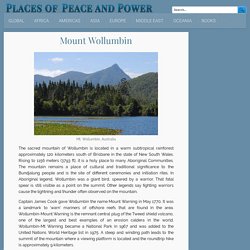 Wollumbin, Australia The sacred mountain of Wollumbin is located in a warm subtropical rainforest approximately 120 kilometers south of Brisbane in the state of New South Wales. Rising to 1156 meters (3793 ft), it is a holy place to many Aboriginal Communities. Uluru (Ayers Rock) & Kata Tjuta (The Olgas) Uluru (Ayers Rock) with Kata Tjuta (The Olgas) in the distance, Australia (Enlarge) Throughout the ages many cultures have conceived of geographic space and expressed those conceptions in a variety of ways. 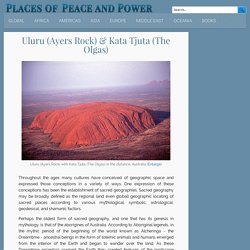 One expression of these conceptions has been the establishment of sacred geographies. Sacred geography may be broadly defined as the regional (and even global) geographic locating of sacred places according to various mythological, symbolic, astrological, geodesical, and shamanic factors. Uluru-Kata Tjuta National Park - Overview - World Heritage Places. The immense rock formation of Uluru and rock domes of Kata Tjuta are remarkable geological and landform features set on a sand plain. 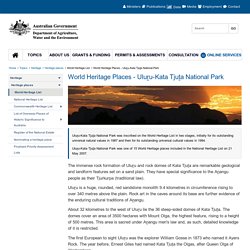 They have special significance to the Anangu people as their Tjurkurpa (traditional law). Uluru is a huge, rounded, red sandstone monolith 9.4 kilometres in circumference rising to over 340 metres above the plain. Aboriginal Uluru Dreamtime Story - Uluru (Ayers Rock) Australia. Uluru and Aboriginal Culture - Uluru (Ayers Rock) Australia. The area around Uluru was settled thousands of years ago, and although it was ‘discovered’ by the white man in the 1800s, Uluru and Aboriginal culture are very much entwined today. 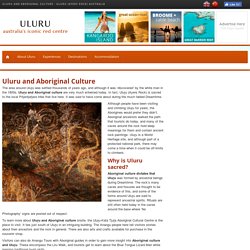 In fact, Uluru (Ayers Rock) is sacred to the local Pitjantjatjara tribe that live here. It was said to have come about during the much fabled Dreamtime. Although people have been visiting and climbing Uluru for years, the Aborigines would prefer they didn’t. Aboriginal ancestors walked the path that tourists do today, and many of the caves around the rock hold deep meanings for them and contain ancient rock paintings. Uluru is a World Heritage site, and although part of a protected national park, there may come a time when it could be off-limits to climbers. 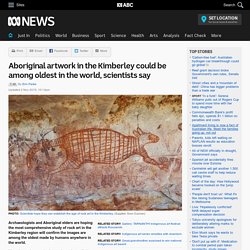 More than a dozen scientists took part in two field trips to study remote faces on Dambimangari and Balanggarra country. They used pioneering techniques to collect and analyse hundreds of samples to narrow down the timeframes in which the striking images of people, animals and shells were made. Professor Peter Veth, from the University of Western Australia, said they were expecting to have the first results through by the end of the year.

"We expect some of those dates to be old, and some of them will be extremely old," he said. "We believe that this art will be as old, if not older, than that art in Europe, and that will make the Kimberley and all of its art, with its living, cultural connections, of world significance. " Wandjina – Rock Art of the Kimberley » Brolga Healing Journeys. Visiting a Wandjina site is, without doubt, the most dramatic experience in rock art. The Wandjina is an ancient, powerful, mysterious and deeply spiritual symbol. The Wandjina represents the creator spirit for the Aboriginal people of the Kimberley region. These striking figures, some dating back thousands of years, are found throughout the Kimberley in rock art sites. The Aboriginal people treat these sites with respect and caution, indeed often approaching Wandjina sites with a wariness bordering on fear.

Native gap conservation reserve. Australian Sacred Sites. Australian Sacred Sites Aboriginal sacred sites are areas or places in Australia of significant Aboriginal Australian meaning within the animist context of the localised indigenous belief system. Most are somehow related to Aboriginal mythology, known as 'The Dreaming, or The Dreamtime'. The Dreaming / Dreamtime is a term used to refer collectively to aboriginal religious beliefs. The Legend of the Three Sisters. Dream Time Story of the 3 Sisters in the Blue Mountains. Three Sisters declared an Aboriginal place. Ms Parker said the declaration recognises the special cultural, social and historic significance of the site to the Aboriginal community. “The Three Sisters are significant to Aboriginal culture as a mythical place of legends and stories,” Ms Parker said.

Department of the Environment and Energy.